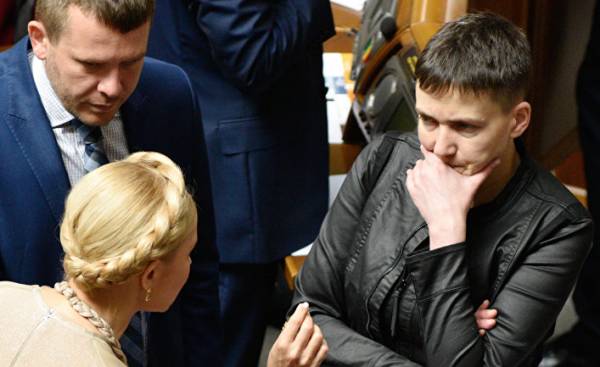 Krytyka Polityczna: When you, after spending two years in Russia, returned to Kiev, the presidential rating you gave 12%, now it is 1-2%.

Nadiya Savchenko: I don’t know what the ceiling is, you journalists come up with these numbers.

— Why is your support so hesitant?

— Measured, apparently, not my support, and what they say on TV: the rhetoric of the President, Yulia Tymoshenko and others, including European politicians, who spoke about me. I and my character are two different things. I check the level of their support, to walk the streets. First, I threw flowers, but I told them not to. There was a time when I was throwing stones.

— Now I can walk the streets safely. Reactions are different: there are smiles, questions, resentment, indifference. I have no fear to enter in any crowd without bodyguards and talk to people, can ride the subway. This is the level of my support. It shows that I was a man.

— First you were hailed as a hero, and then began to call the agent of the Kremlin.

— It does not matter. Character I called people who don’t know about me. I was the image created of the Ukrainian propaganda. On the other hand, Russian propaganda portrayed the hell out of me. They wanted to show that in Ukraine, even the women is a monster. But I was strong enough to dissociate themselves from the fact that invented both sides, to prove that not everything will be as they want. Because of this, in Ukraine about me began to say worse, and better in Russia. It turned out kind of balance, and it shows that I’m not lying, and they are.

— “Hope Savchenko enough sincere people, not all of her actions I understand, but it is configured like human beings and not infected with the madness of Kiev, with all that it is, of course, for a United Ukraine and for the return of Donbass and Lugansk. She agreed to talk with Zakharchenko and Plotnitsky, and comments on them are extremely high”. Do you know whose it is words?

— Russian writer Zakhar Prilepin, who some time ago became a major in the self-proclaimed Donetsk people’s Republic.

I’m glad people are waking up. Although Prilepin is, rather, not a writer, just stupid people.

— You actually assess positively the actions of Zakharchenko and Plotnitsky?

— Diplomacy — a specific area, especially military diplomacy. When you sit down at the negotiating table with the enemy, you need to forget about all the emotions and grievances. My sister told me once that I must negotiate as though she is in jail, and depend on me her fate. Diplomacy I learned from her. I understood that the words which I shall speak in Europe and in the East, depend on people’s lives who are in captivity. No matter what our goals, but we three, I, Zakharchenko and Carpentry, fought. A soldier to the soldier seriously.

— So you meet with representatives of the insurgents only in order to try to release the Ukrainian prisoners?

Is very important to me. I do my best to make it happen, and hope to find an inventive way out of the impasse that stymied negotiations in the framework of the Minsk process.

— In the book-interview “Ukraine, my love” you compare the process of exchange of prisoners of war, trafficking. This is a very harsh word.

— Unfortunately, that’s what happens. Even if the exchange engaged in during the war, the commanders, he is in this state because they are discussing the price of human life. When this process is connected to another, and politicians who want to make a is obtained simply trade.

— Therefore politicians so delay this process?

— I don’t think they want to announce all the good news at the same time, as long as the government is struggling with the consequences of their failed policies or scandals, what else has to say. The exchange of prisoners always becomes news, which attracts people’s attention, so it is slow. Sometimes I think in politics there is nothing human left.

— Back to the topic of the dialogue with the representatives of the breakaway republics. They are not entirely independent, and behind them is Moscow, then why talk to them?

This idea hammered into your head people policy. Is it worth talking to the enemy? Worth it. Though, because it can sway. This is one of the principles of military diplomacy. Zakharchenko and Plotnitsky — the Ukrainians. If we call the inhabitants of the occupied DNR and LNR territories separatists, terrorists or collaborators, we will only attachem them away, but if we say that it is our people, they will return to us. Believe me, it’s all worth it.

Words that sound in the book, you can conclude that you, if not equate President Petro Poroshenko to Vladimir Putin, I believe that it is not so different from the Russian President better.

— If the President values his money above the life of Ukrainians, above the state and those people who gave him confidence and was given power — he is a criminal. I can not perceive it otherwise. I think the way we thought on the Maidan. We’ve all seen the wealth of Yanukovych, but he wasn’t the only one. However, Poroshenko took with him a Ministerial post. In politics, the Apple falls from the tree very close by.

— However, (at least at the official level) that the President and his entourage stood for your release from a Russian prison.

— In politics nothing happens by accident. Politicians to hear people, the have to shout. About me people were screaming very loudly, so the politicians decided to take advantage of it. Someone made me is used in their populist campaign. The President also knew he needed to do something. When it comes to other people’s lives, politicians behave sincerely. They have no spirit of patriotism. After all, patriotism is the ability to give everything for their country and they are patriots only her purse and ready to take from the budget the last of the hryvnia. So I have no illusions about his release. I am grateful for what they did, but the more gratitude I feel for the Ukrainian people, the Ukrainian Diaspora and residents of all those countries that believed the Ukrainians. It was the power of people from around the world.

— You were on the Maidan, fought, spent two years in a Russian prison. It was worth it?

— Of course it would be better if it all escaped me, I would live easier. But it was not in vain. Every day is a new lesson, and the knowledge will surely benefit in the future. It will probably get worse.

— And then I would go to the battalion “Aydar”?

— Then I would go to the front and in the battalion, which is there. If it was “Aydar”, then Yes. The officer, who ten years received a salary for his service, cannot hide behind the volunteers.

— Two years in Ukraine will hold parliamentary and presidential elections. You once said that you wanted to become President.

I don’t know how to respond to sound normal… I’m ready to take responsibility for the country and stand as a candidate in the presidential election. In the parliamentary elections will participate my political force. God, it sounds horrific from the mouth of a politician…

— It will be a political party “Civic platform of Hope Savchenko”. Why is everything tied to my name? Because I have no more. It is my honor, I put her on the map. I believe that this power will not be a political party in the classical sense, one I’m already gone, and the new do not want to join. I don’t see them as the future and the ability to move in the right direction.

— What are your party will differ from the others?

— It will help to dismantle unhealthy political system, which was established 25 years ago, to rebuild the state architecture and give people the chance for a comfortable existence within it. It will be a symbiosis of various systems, we will not mindlessly accept or reject any ideas.

— Some of the projects that were going to be honest or even were, had failed without the help of oligarchs and their media.

— This project will receive the support of the oligarchs and the media. We just are not going to follow the example of other parties and say, if do not take money from them. You can not lie.

— You want to return to the army?

I really want to fly, but I’ll be back in the army only when things in Ukraine will get better, and the Ukrainian army will be combat-ready. But first you have to do.