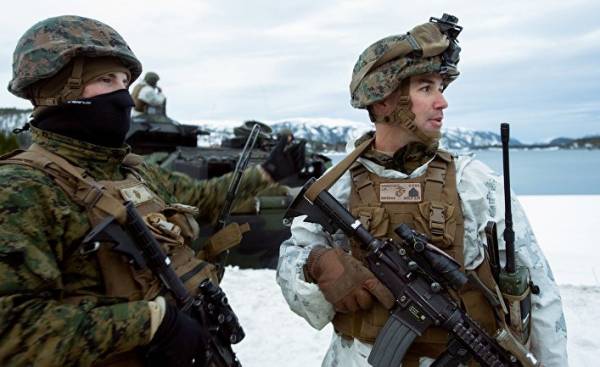 300 soldiers from the corps, U.S. marine corps (USMC) experienced a real shock when, during a NATO exercise a few miles from the border with Russia realized how ill-equipped in the event the winter war.

They were cold, lost skis, they had to use duct tape to rig just simply falling apart.

“For many, this was truly a strong impression”, — says Lieutenant Sean Gil (Sean Gil) of the company of the 1st battalion, 2nd marine regiment, in an interview to the online edition Military.com.

“When you run in the snow in the middle of the frozen Arctic lunar landscape and you realize that mounting your skis do not hold ski boots, already too late.”

To keep warm, the soldiers wore several layers of clothing — while the jacket will not burst. “They looked like the man from the Michelin tires,” commented DefenceNews.

Sergeant Acevedo told the newspaper: “I would not have given that ski gear, which we got.”

“After 12 years in the wilderness, it took us a good lesson,” admitted major General Neil Nelson (Nelson Niel) in conversation with Military.com.

The marine corps was not doing well

When American soldiers first arrived in Trøndelag in January, all paid attention that they are with their habanim uniforms were poorly dressed for the conditions of the Norwegian winter. But when soldiers at four weeks were sent to the North in Finnmark, was much worse.

Skis and ski boots did not want to be attached to each other, probably because the mount was metal, and the boots on the old rubber.

Zippers on the jackets could not do this, their clothes torn at the seams.

Shoes to wear was difficult, they were heavy and practically unusable, if only the soldiers were not in place.

Packaging for ammunition and provisions were spread, I had to fix it using the same duct tape and parachute fabric.

“Marines who have used the equipment, found that many simply needed to be improved,” reported Aftenposten major Alsh Richard K. (Richard K. Ulsh) corps of the U.S. marine corps.

Showdown in the marine corps after the exercise in conditions of the Norwegian winter did not go unnoticed for Russia and Russian media.

“During a training exercise near the border with Russia, the us Marines felt cold,” — wrote the Russian military newspaper “Star”. 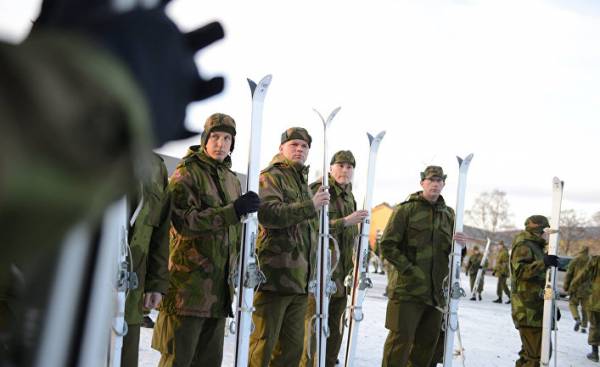 “So you to are approaching our borders?” asked the Agency “RIA Novosti”, sarcastically wondering where it was tested winter gear in Florida or Hawaii.

“It’s just a fiasco. They arrived in the Arctic either to freeze or to they ate polar bears,” — writes on radio Sputnik Vladimir Bychkov, who recommends that the Pentagon next time to send their troops somewhere to the South.

“Laughter and shame” comments Rambler.ru and adds that “Russian soldiers.”

The Russian joke about the frozen Marines hides one of the most difficult issues in relations between Norway and Russia.

The military exercise Joint Viking and the stationing of us Marines in Norway has caused a sharp reaction from the Russian side. 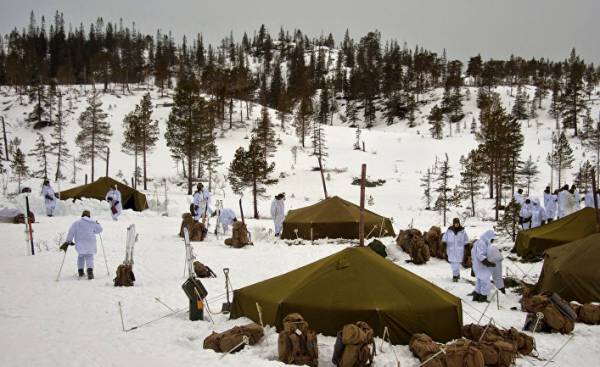 © flickr.com, Minnesota National GuardЧлены of the national guard of Minnesota on exercises in Norway.

Many, including in Norway, one wonders: is this the emasculation of the Norwegian base policy from 1949, according to which Norway should not have permanent foreign bases while the country is threatened with invasion.

During a major conference devoted to issues of security, defense Minister Sergei Shoigu described the exercises in Finnmark and Marines in Norway as an example of what NATO is practically preparing to start a war with Russia.

The Russians also used the exercises for arms build-up in the Arctic.

In may, the latest Russian military equipment designed for combat in the Arctic, was demonstrated during a parade in Victory Day on red square.

Exercises in Finnmark also cited as example, when the Kremlin-controlled media report about Russia in a hostile environment.

Norway and NATO, in response, noted that the NATO exercises are small compared to those that the Russian hold on its side of the border.

Norwegian military presence in the North is very small compared to the number of Russian troops amassed on the other side of the border with Norway, where there are also several important military bases, and nuclear weapons.

Change of equipment after blunders in Finnmark

Having winter in Finnmark so much excitement, the marine corps decided to replace part of the ammunition.

“This is the point of training,” says major Richard Alsh from the USMC.

“The opinions of our Marines will be taken into account to improve equipment,” wrote Alsh in an email to Aftenposten.

In the Norwegian armed forces the issue of comment is not wanted, but given the General answer: “One of the purposes in conducting military exercises in difficult climate conditions is to identify the possible need for changes in ammunition soldiers.”

“We from the Norwegian side would not like to comment on the possible problems associated with equipment that need to be addressed to our allies,” — said in an email to major Brynjar Stordal (Brynjar Stordal) from the operational headquarters of the armed forces.

Now the us military want to make Værnes a permanent base for its naval infantry in Europe, and this means that the number of American soldiers will be doubled and 600 people. 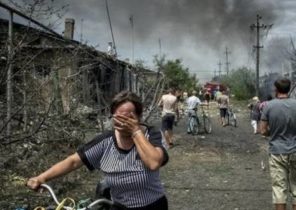 In Ukraine called the main condition for the reintegration of Donbass 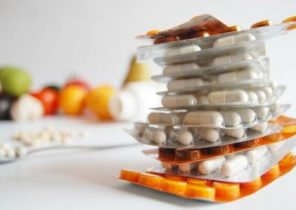