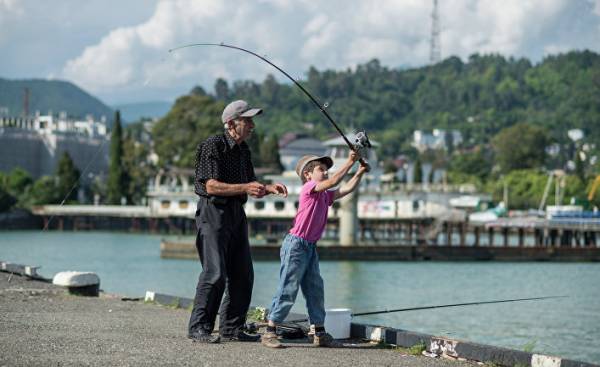 Sukhumi. — “The whole day fish catch until the bucket’s full. To do nothing more,” says patient young fisherman Andrew.

12-year-old boy born and grows in a country that officially does not exist and where time actually stood still. With every passing year, the probability that Andrew will be Russian, is growing.

Next to Andrew on the beach in Pitsunda is his father, dressed in the Abkhazian military uniform.

The self-proclaimed microstate, which is home to approximately 250 thousand people, which formally is still in war with Georgia, although, since one of the bloodiest wars in Europe in modern times it has been 25 years.

“There are only small fish are caught. The Turkish schooner that simply devastate the sea. Then everyone does what he wants. About us, nobody cares,” says the grandfather.

Abkhazia — one of the forgotten frozen conflicts in Europe, where Putin is quietly, but seriously compresses the grip.

Dream of princes and party bosses

The Royal family, heads of the KGB and Soviet leaders from Stalin to Brezhnev were United in one thing: Abkhazia was to become one of the most beautiful coastal areas in Europe.

And the great princes, and the Communist chiefs were preferred to rest in the subtropics — the white beaches on the Black sea.

When Aftenposten enters the breakaway Republic, we see that the time seemed to have stopped.

“Then after the war almost nothing was happening,” says Olga, walking through the ruins of the city of Soviet dreams of Gagra with my daughter Mary.

The war in 1993 led to the fact that half of the population is Georgians were expelled after the mass murder and mayhem on both sides.

There are overgrown ruins of the abandoned Georgian houses.

As Russia absorbs another piece of Europe

While world leaders are entirely absorbed by Ukraine, North Korea, trump and Syria, foreign Minister Sergei Lavrov in April chose to go to Abkhazia — for the first time in six years.

Officially, the purpose of the visit was the opening of the largest buildings in Sukhumi — the new building of the Russian Embassy.

However, introduced new procedures to facilitate the Abkhazians Russian citizenship.

“Lavrov is trying to show the modes in the occupied territories that Russia can support them and strengthen their position in the international arena, which, of course, is an illusion,” said the Minister of foreign Affairs of Georgia Mikheil Janelidze in an interview with RFE/RL.

Many events of recent months suggests that Russia is slowly but surely winning more of the frozen conflicts in Europe:

• March 31 the armed forces of the breakaway Republic of South Ossetia was officially part of the Russian armed forces;

• On may 2, Putin in between conversations with trump and Merkel chose to meet with the President of South Ossetia, to discuss “closer integration”;

• in Moldova came to power a very Pro-Russian President;

• in Armenia’s frozen conflict in Nagorno Karabakh has made the country more dependent on Russia. Now the Russians are expanding a major military base in the country, signed a new agreement on closer military cooperation;

• in may, Russia threatened the complete termination of participation in the Geneva talks on the Caucasus. According to a recent poll, 63% of Georgian population consider Russia the biggest threat to their country.

The new President of Moldova, Igor Dodon, on his own skin experienced, who’s in charge, when he was invited to the Kremlin on March 17. Guest had to wait in the waiting room for four hours.

Visit Dodon in the Kremlin shows that Russia is in no hurry. The longer the conflicts, the more Russians are tightening their grip.

The recent report of the Organization for security and cooperation in Europe (OSCE) warns that the frozen conflicts can flare up again.

“Now I don’t see any solutions. Russia significantly increases its influence, says Dr. Hans-Joachim Schmidt of the German Institute for peace studies in Frankfurt in an interview with Aftenposten. But if we will strengthen security in Europe in the future, these conflicts must be resolved”.

According to him, the complete isolation brought the breakaway Republic with Russia.

“We should not put them in complete isolation,” — says Schmidt.

The causes of frozen conflicts in Europe

OSCE experts point to several causes of conflict that Europe has not been solved in 25 years:

1. All conflicts are “separatist” conflicts associated with the collapse of the Soviet Union.

2. Conflicts were unleashed by the nationalists — from all sides. However, the key to the solution is in the hands of strangers, “rounds” — such as Russia.

3. All parties involved in the conflict perceive them as completely existential. They still believe that you can win without any compromises.

4. The parties are convinced that in the foreseeable future, the conflict cannot be resolved.

5. The self-proclaimed States run by groups that are cashing in on the existence of frozen conflicts, both political and economic capital.

6. However, conflicts — for historical reasons — very different from each other, which requires different solutions.

Closer to Norway than most

Frozen conflicts — is much closer to Norway than it is obvious to the majority.

In Georgia, Norway runs the prestigious NATO project JTEC, which the armed forces of Norway called “an important moment in NATO’s history” and “completely unusual.”

In April, Ine Eriksen Sereide (Ine Eriksen Søreide) became the first Norwegian Minister of defense, visited Georgia. Was signed bilateral agreement on cooperation in the field of defense. In the Norwegian press that the event was covered minimally.

Norwegian officers from the special forces of the armed forces — despite vigorous protests from the Russian side is engaged in training of Georgian soldiers near the capital of Georgia.

“We will never recognize South Ossetia as anything other than the region of Georgia,” said NATO Secretary General Jens Stoltenberg, when it was reported that the country’s armed forces became part of the Russian army.

What are you afraid the Russian Caucasus

The Russian movements, however, lurks the fear that the dream of Russia is about to fade.

Christmas eve on Abkhazia has swept the protests against years of corruption, the rule of the mob and the extremely low standard of living.

Due to the economic crisis Putin becomes harder to spend billions to placate the rebels, while EU, US and those NATO countries, like Norway, are investing increasingly large sums.

The situation in Georgia is developing in a very positive direction that contrasts sharply with the rebellious republics. 500 thousand Georgians in the last four years was able to rise above the poverty line, according to the world Bank.

Christmas eve and Georgia has offered to issue passports to residents of Abkhazia and South Ossetia. Those who agree to the proposal, will be able to travel to Schengen countries without a visa.

Although Russia and compresses the grip in the breakaway republics, the everyday life of citizens of these republics — bad publicity for Putin.

Abkhazians, Ossetians, Armenians, and the inhabitants of Transnistria are paying a very high price in the form of extremely low living standards, corruption and the regime, reminiscent of the mafia.

In Abkhazia to the correspondent of Aftenposten had to pass six police checkpoints to drive 100 km from Sukhumi.

In the dilapidated port with crumbling piers and abandoned buildings many Russian investors have installed a huge screen, through which the Abkhazians receive the latest advocacy news from “Russia 24”.

“It’s beautiful, but life is hard, — says the resident of Abkhazia Olga, the mother of a young daughter. Nobody knows what will happen tomorrow. We cannot continue to live”.

Background: In the Soviet era Abkhazia was an exceptionally multicultural region. The kings of Abkhazians Muslims were forcibly resettled under Stalin and the largest ethnic group were the Georgians (approximately 48%). Abkhazians, Russians and Armenians together accounted for approximately 52% and to be part of Georgia didn’t want.

What happened When Georgian forces entered the region in order to suppress the Abkhazian rebellion, war broke out. The Abkhazians were helped by Russian “volunteers”, especially the armed Chechens.

Consequences: According to the red cross, killed at least 10-15 thousand people. The war ended with the expulsion of more than 200 thousand Georgians.

Now: the Republic has been recognized only by Russia, Nicaragua, Venezuela and Nauru (2008). In practice, Abkhazia is totally dependent on Russia in economic and military terms, but enjoys greater independence from Russia than South Ossetia.

Background: War broke out when the South Ossetians, supported by Russia, did not want to be part of Georgia after the Soviet collapse.

What happened: the Conflict was exacerbated by political turmoil and a military coup in Georgia, and the Russian intervention. Almost two thousand people were killed. In 2008, the conflict led to war between Georgia and Russia.

Consequences: the Breakaway Republic of South Ossetia and Abkhazia constitute 20% of the territory of Georgia.

Now In practice the country is under the control of Russia, those in power want to be part of Russia.

Background: the Enclave of Nagorno-Karabakh in 1923 was given by Stalin to the Republic of Azerbaijan. In 1989, the majority of the population in the region were Armenians (76.4 per cent).

What happened: After the Soviet collapse, increased ethnic conflicts. In 1991, Azerbaijan declared itself independent, and abolished the autonomy of the enclave. The Armenians of Nagorny Karabakh demanded unification with Armenia. The result was the outbreak of a bloody war, in which Russia supported the Armenians.

Consequences: At least 20-35 thousand were killed, about a million people on both sides were forced to flee.

Now we can see that economically and militarily the region is controlled Armenia, but at the international level, Nagorno-Karabakh is recognized as part of Azerbaijan. According to the OSCE, every year 50 people die from the bullets of snipers. In April 2016 a burst of fierce fighting, they have led to large losses.

Background: When Moldova became independent from the Soviet Union, the rebels in Transnistria on the East Bank of the Dniester river declared independence from Moldova.

What happened: In March 1992, war broke out, which lasted four months and claimed about a thousand lives. When the army of Moldavia tried to regain control of the region, to help the rebels came, the Russian army and the Russian “volunteers”.

Consequences: Since then, the self-proclaimed Republic several times asked to be part of Russia. The region is thoroughly permeated with corruption, it is ruled by the mafia, and the state of the economy badly.

Now: According to the UN, Transnistria is part of Moldova, it is not recognized by any single country. The quietest of “frozen” conflicts.