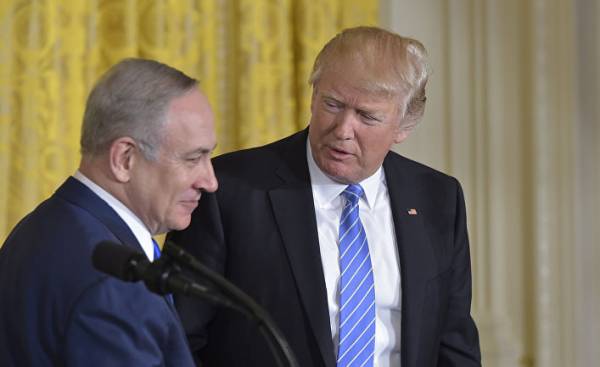 The Declaration is one thing, reality is another. Every child in Israel knows that the main task of Prime Minister Netanyahu is the preservation of the Palestinian-Israeli conflict. In the agreements with the Palestinians, Netanyahu sees the threat — there can be no question of any compromises. And what about trump? Is he so naive and actually thinks he will be able to achieve settlement of the conflict? Not really. He wants to demonstrate to Arab leaders (also known as its hypocrisy) that he intends to be active in the middle East. Nothing changes. And the only one who still believes in the possibility of peace, it is the few activists on both sides.

No expectations from the visit trump. The American President arrived in Israel, but at home waiting for him numerous problems, trouble and surprises. Netanyahu gets her portion of attention from the American media, who have always been supportive of foreign Prime Minister, speaking in perfect English in American way. Nothing will happen. Imaginary argument (where is the wailing Wall — in Israel or the West Bank) will be discarded. In a week nobody will remember. Genuine differences (if any) will be carefully hidden. American and Israeli diplomats have in this great experience.

Trump paid a visit to Israel to demonstrate their activity in foreign Affairs. He needs good photos for the media. Lots of handshakes, minimal interest in local troubles and problems. He is not able to listen to the interlocutor more than a few minutes. These are all extremely satisfied with Netanyahu. This situation is very comfortable for the Israeli Prime Minister. This comfort is the only achievement of Binyamin Netanyahu during the eight years of his reign.