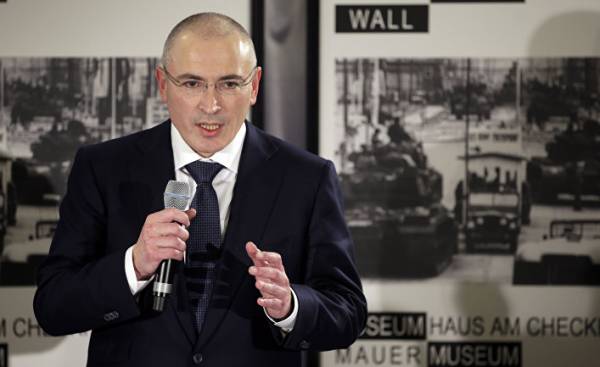 Former Yukos CEO and founder of the organization “Open Russia” Mikhail Khodorkovsky is convinced that the current model of governance, the economic situation in Russia improves. The society is not yet ready to allow the government to spend money on military adventures, because it feels “wrong syndrome humiliated nation.” According to Khodorkovsky, when changes occur, we will “need to quickly seek a solution to all those problems” in relations with the West. “In order for this to be done quickly, we already have to be personal, friendly contacts. We should be clear to each other,” — said in an interview with Delfi critic of the Kremlin. In this part of the sanctions against Russia may remain even under the new government, because on the question of the Crimea will take more than one year, says Khodorkovsky. This week he took part in the Vilnius Russian forum. During the discussions, assessed the development trends of the Russian economic situation, the fight against Russian propaganda, and other relevant issues. After the forum, Khodorkovsky answered the questions of Delfi.

Delfi: In the beginning, when the question of the company’s investments in YUKOS oil concern Mazeikiu nafta, you came to Vilnius to participate in a discussion on Lithuanian TV, to allay the fears and mistrust of the Lithuanian opposition with respect to threats to energy security of Lithuania. Was afraid our politicians don’t even Yukos, and Russia. Now in Lithuania and the Baltic States have no fears, and a very acute sense of threat from Russia. How do you think it has a factual basis?

Mikhail Khodorkovsky: You know perfectly well that Putin today is a man who is hardly able to improve the economic situation in Russia, so he needs some strong tools to support consensus around them. If he as such a potent means to use pressure on the Baltic countries — Yes, of course, this risk exists. And I think we should think about from a political point of view, but it should be understood that the device of the psychology of Putin’s regime is based on the fact that any concession is not a reason to agree, and the basis to take the next step. That is, they do not perceive the policy of concessions, just as it was not taken 70 years ago.

— How do you assess the current state of the Russian economy?

— Control system, which uses Putin, is extremely outdated. Attempt to build the vertical of power is impossible, because it turns into a vassal relationship between the relatively independent vassals, the regional barons, who are forced to rely on the Central government, plus control of industries. What such a model results, where no individual sources of legitimacy, an independent judiciary, where it is impossible to solve the conflict? This leads to a simplification of the economy. The industry, which can be simply built in vertical type raw material industries, metallurgical, large machine-building plants in General, may function in this model. Adjusted for the corruption component, the total exclusion from global processes of division of labor, however, they may exist. The process technology is more modern, based on competition of ideas and, hence, on the set of the enterprises of small and average business in such a situation to exist almost can’t. As a consequence, Russia’s economic growth while he worked the heavy industry, went up, and then stood on the shelf. And on this shelf we are already four years. On this shelf varies along with the price of oil. Not because oil plays such a big role in the Russian economy, in fact it is not. Just oil is that the price ranges that curve around the shelf. Is it possible to get off this shelf and again to begin way up? Putin sure is. Kudrin says that there are some models. I am convinced that there is no model in which a country with outdated political system is authoritarian, not having independent points of legitimacy, separation of powers, independent judiciary, etc., are able to accept within yourself high-tech production. China did under a completely different model. This option is not repeated.

— So where’s the money on upgrading military adventures in Syria, in Ukraine, it is likely that in Libya? Where such a mood to resist NATO?

— The Russian society in its certain part is experiencing the so-called “Weimar syndrome,” the syndrome of a humiliated nation. I believe that is wrong. No defeat in the cold war actually was not. It was liberation from the cold war both the West and Russia. But the society imposed that it lost. And this feeling was humiliated nation. Putin is due to funds companies that humility therapeuticum. How much society is willing to spend — a lot. They take and throw it in that direction, maybe 20% of GDP. Relatively speaking, in Western Europe, to throw that kind of money when you the hospitals are not working, schools are in ugly condition, when you have a road not being repaired, it would be fatal for the government. Now in Russia the situation that was in Germany after the First world war, when society is ready that to scratch your ego, to allow the government to spend the money. Russia is a country rich enough and 20% of GDP is a lot. Real military spending commensurate with the we USA and Western Europe. Takes a large chunk of GDP, and yet people agree with that. I really hope that this temporary agreement. And we have already seen that the so-called “Crimean consensus”, part of which is agreeing to spend a disproportionate part of the GDP not to increase the welfare of the people, and all sorts of nonsensical military adventures, is destroyed. I hope that he has not long to live.

— The question of the Russian opposition, which continues to use the rhetoric of the struggle for political freedom, right to her clear. It would be more appropriate in this case, to use the language accessible and understandable to people? To talk about the economy, social difficulties. Whether it’s the opposition?

— Here there is a problem with the fact that, being a long time cornered, the opposition likes to talk to people who understand the situation. And among people who understand the situation, you run the question about the economic problems and the transition to the causes of these problems, which is really a political device. Now for all of us in Russia who works with society as a counterweight to the Putin regime, to comprehend, to realize that to run is not necessary. When I Facebook start detail to explain these things, pounce on me: what are you 10 times repeat one and the same. No, you guys. This is for you, in our corner clear, and the rest 142 million is unclear. And it is necessary to tell, because they are from a lot of sources say different — that in fact our economic problems are not with the political system, and the fact that all of the Americans.

— Do you see a leader who could talk about economic issues, to unite the opposition, so that he could in future elections could challenge the power?

— I think it would be incorrect position, which calls for the unification of the opposition. This is not true, at least from two points of view. First, the segmented society. If you are a socialist position, the part of society that is business oriented, not yours. If you speak from the standpoint of statist, that part of society which is in favour of liberal reforms, not yours. From this point of view the opposition is beneficial to proceed on parallel tracks, working with different segments of society. But it’s not the biggest problem. The biggest problem is how today said Ashurkov (Vladimir Ashurkov, Director of the Fund of struggle against corruption — Prim ed.), being in the Union then and as long as it is beneficial to us. If we are not profitable, we’re leaving. This means that if there is no independent political forces, backed by its resources, for example, Bulk today says: guys, then you do not need us. It is “not necessary” means that we would change one monopoly monopoly leader to another leader. In the US and the UK is opposed to this law. We have this law is not opposed. What is the option? Have to go in several columns, each with its own resources, and then benefits no one to cut a piece of this combined resource, because it goes along with his support. And then there is the situation when the change of government we receive a pluralistic model, not a return to a new round of authoritarianism.

— Assume power in Russia has changed, what are the first steps she should take in relation to the West?

— I believe that we will need to quickly seek a solution to all the problems that have accumulated. In order for this to be done quickly, we already have to be personal, friendly contacts. We must be clear to each other. Alternatively, the West is six or twelve months to get accustomed to power. As we know from Russian experience, the society gives reformers only two years.

But one problem is the Crimea. How it will be solved?

— I am convinced that this is not a problem that will be solved in the first two years.

— Yes, this means that some sanctions would remain. What to do about it. Politics, as we say, the art of the possible. We can’t do what can be done. I’d like, but it is impossible.

— You repeatedly said that Russia is part of Europe and being in Europe, Lithuania, you feel at home?

I feel, of course, in Moscow. But when I come to Lithuania, you nature me, anyway, it reminds me of the one with which I am familiar all his life. And from this point of view, I think the tourism potential of Lithuania for the Russians has not been exhausted.