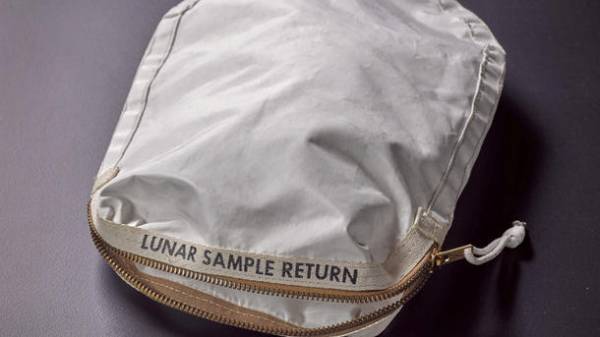 Lawyer Nancy Lee Carlson from Chicago — the only one in the world who legally owns the moon dust. NASA tried to select at it a bag in which Neil Armstrong brought back samples of rocks, but nothing happened: the court confirmed that Carlson bought it legally. How valuable artifact, which can now be sold for several million dollars, was a simple man, says “jellyfish” with reference to the newspaper The Wall Street Journal. And it turned out to be a complicated story.

21 July 1969 on the moon sat module spacecraft “Apollo-11”. Crew commander Neil Armstrong emerged from the ship, said the famous speech about a big step for humanity and collected in a special bag a little bit of the lunar soil — in case the mission would have to be severely interrupted.

Bag and soil returned to Earth and stored at the NASA. In 1972, when I completed the last mission to the moon, engineers and scientists the Agency asked to vacate the place for the upcoming program “space Shuttle”. So they began to take home, give away and throw away the belongings of the “Apollo.”

One of those who got Souvenirs from space, was Max Erie. He worked as the Director of the planetarium at the science Museum in Texas and, he said, often encountered in the Space center the Lyndon B. Johnson with the engineers — they asked him to help take out the garbage. Erie with permission of NASA employees kept some things sent to landfill.

In one of the boxes with “garbage” was a bag of Neil Armstrong, but Erie claims that he did not know about its origins. Later he led the Kansas center cosmosphere and space. In 2002 it became clear that Max Erie was selling items that were in the Museum’s collection. In 2003, FBI agents raided his house and took away all the things that are somehow connected with the cosmos. In the garage they found the bag, walked on the moon.

Erie was imprisoned for two years for theft of government property and money laundering. Confiscated his belongings handed over to the U.S. marshals service for resale. They have lain in the vault for another 10 years, after which they are auctioned.

Lot, which included the bag with the lunar soil, the start key of the ship “Soyuz T-14” and the head restraint from the command module of spacecraft “Apollo”, in March 2015 noticed Nancy Lee Carlson. The item description said, “One bag for the sample of lunar soil from the lunar dust (“moon bag”), 29 inches, center hole. Mission unknown.” Carlson bought the product for $ 995.

To make sure that the bag is really the lunar soil, the woman sent her to the center of the Lyndon B. Johnson. She waited for a response six months; in the end, she called and said that it really is bag with lunar dust, which flew in the mission “Apollo 11”. Realizing their mistake, NASA has left the bag by itself, and asked the court to cancel the auction.

But Carlson also went to court she thought that the Agency had unlawfully appropriated her property. In December 2016, judge Thomas marten sided with the Americans, by recognizing it as a bona fide purchaser. Two months later, Nancy Lee Carlson’s son and a lawyer arrived at the center Johnson. She was given a box with the very same bag, which she immediately handed over to specially hired security.

In July 2017, a bag of Neil Armstrong will auction Sotheby’s. The lot is estimated at 2-4 million dollars. Nancy Lee Carlson is going to spend part of the money to Finance scientific and medical research.

Sotheby’s senior specialist, Cassandra Hatton says that the lot can be sold for several million dollars, because NASA does not allow individuals to own parts of the moon. This is an exception made by the court (eng. lang.).