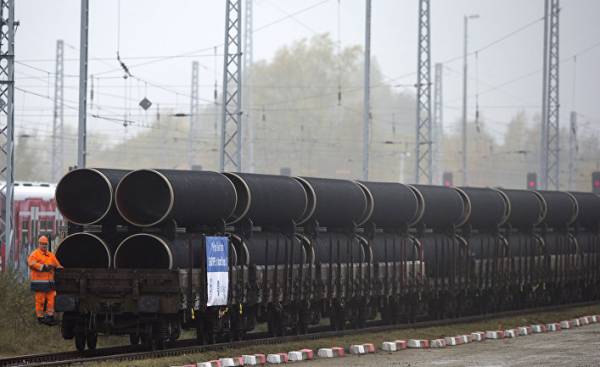 Russian Gazprom is preparing the project of a new gas pipeline “Nord stream — 2”, which will run from Russia to Germany. The pipeline should be ready by the end of 2019.

New gas pipeline “Nord stream — 2” will be laid to Germany from the South coast of the Gulf of Finland. We are talking about the coast of the Narva Bay and the Kurgalsky Peninsula. Already built the pipeline begins in the Vyborg Bay and stretches to Germany. In fact, and in another project we are talking about two threads, which can supply annually 55 billion cubic meters of gas from Russia to European markets.

Edition Yle asked to Express an opinion on a new gas pipeline Professor at the University of Tampere Pami Aalto (Aalto Pami), dealing with EU energy policy and Russia, the programme Manager of the protected areas of the “Greenpeace Russia” Mikhail Kreindlin and as communications Director of Nord Stream Ulrich Lissek (Ulrich Lissek).

1. Will increase if the “Nord stream — 2” the EU’s dependence on Russian gas?

Professor Aalto: will Not increase. At present the EU market is a struggle, and Russia has managed to adapt to these markets, resulting in a favorable consumer prices. Russia will not be able to increase gas production. I believe that the new pipeline will retain the existing dependence, as Russia only wants to compensate with gas pipe under the Baltic sea, the current gas transit through Ukraine.

Director of communications Lissek: will Not increase. We understand the concerns of European countries. The project “Northern stream — 2” gives the impression of a political project. It is not, because the project is completely commercial.

2. Currently Ukraine receives approximately two billion euros for the transit of gas that goes through its territory from Russia to the European markets. Will the country with nothing when the “Nord stream — 2” will be built?

Professor Aalto: Ukraine would have to get rid of the situation of the country, which goes through transit of Russian gas, because it creates instability in its domestic politics and, until recently, led to inefficient use of gas and the endowment policy. Ukraine should carry out the energy reform. From the point of view of Russia, the renewal of Ukraine’s gas contracts is a complex political process. In addition, the gas pipeline passing through the territory of Ukraine, are obsolete.

3. How the new pipeline will affect the environment of the Baltic sea?

“Greenpeace of Russia”, Kreindlin: We are opposed to the pipeline passed along the southern shore of the Gulf of Finland through a protected natural area, located on the shore of Narva Bay. Here is situated the protected area, but it is still considered as an option. There are growing rare plants, unique animals live, there is old forest. In Russia, people think about changing the status of this territory, so that through it could pass the pipeline. We do not oppose the second option.

Professor Aalto: On the stage of the pipeline always is the impact on the environment. In Finland, the services in charge of environmental protection, always approach this issue very strictly. Attitude towards the environment is for companies the question of image.

4. Does the organization of Nord Stream with the Russian organizations involved in environmental protection?

“Greenpeace of Russia”, Kreindlin: we had one meeting with representatives of the organization. But when we have clearly stated that they oppose the laying of a pipeline on protected nature areas, the cooperation stopped.

Director of communications Lissek: We met with representatives of many organizations such as the world wildlife Fund and Greenpeace. We will again meet them, when to begin the process of obtaining permits in the coming months.

5. Does the project “Northern stream — 2” an additional threat to security in the Baltic sea?

Professor Aalto: does Not create. The pipeline passes through the territorial waters of Finland. Russia will not strengthen its military activity due to the project “Northern stream — 1 and Nord stream — 2”. Taking into account the other activities of Russia, we can say that the pipeline is only a drop in the ocean. For Finland the construction of the pipeline will mean some increase in employment for a short time.