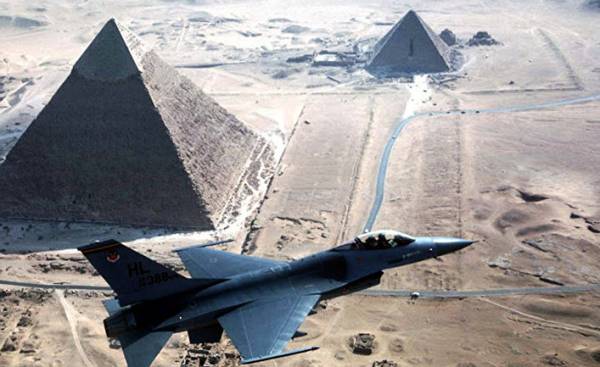 On one of the forums I asked a specific question: if the President of the United States Donald trump has promised to support the economy and military capacity of Egypt because of that country’s role in the fight against terrorism, what he expects to get from Cairo in return?

I would prefer that my reply went beyond the direct meaning of the question, covering the wide horizons of the strategies of international actors, especially major powers. These strategies are not limited to narrow framework of bilateral relations, but the question itself is regulated depending on the main challenges to the interests of national security, which are subject to change.

Today the front line of this large force, according to the announced strategic priorities of the administration trump has moved from the West to the middle East. Previously there was a precedent when the United States provided Western countries on the front lines, assistance known as the Marshall plan, which in itself was a strategic step to protect its national security.

The first goal of the Marshall plan was to help the countries of Western Europe, giving $ 13 billion (according to the current value of the dollar, this amount is equal to the current 130 billion dollars) in economic assistance to rebuild Europe after the Second world war. Everything was done to help Europe to once again become prosperous, thereby preventing the spread of communism, a new threat to national security. Most of the aid was received by industrialized countries. It was considered that their reconstruction will guarantee prosperity throughout Europe. The largest share received the Kingdom, then France and West Germany.

At that time Europe was destroyed by the war. Roads were destroyed, bridges, supply lines and transportation, the economy was in short supply, many people had no food, while Europe has been on the front lines of a new enemy — the Soviet Union.

As the years passed, and Europe prospered during the implementation of the Marshall plan from 1945 to 1952. Then, in recent years, began to show the declining importance of the presence of the front line in the West. This feeling has intensified in the age of Obama whose policy is known treatment to the East, more precisely, the prioritization of Asia. Such a turn helped to reduce interest in Europe, and all that was associated with this trend. Decreased strategic focus on the middle East, which obviously was an opposition to the spread of terrorism, which continues to be a threat to the entire Western world.

After coming to power of trump as President of America, he set the war on terror at the top of its strategic priorities, saying that “in the fight against terrorism, we need new allies and new friends.” Thus, trump has indicated that the front line is currently moved to the middle East, which poses a threat to the United States and its national security. Thus, when trump decides that Egypt is at the forefront of a new front line on the other side of which is terrorism, it takes the decision on granting economic and military aid, enhancing the front. It goes the same way as the leadership of the United States during the Second world war, which found its expression in the form of a draft Marshall.

The world is changing, and many of the principles that prevailed in world political thought and influence on foreign policy is already changing. First and foremost, the concept of national security, which the United States adhered to in previous years, showed the United States as the first superpower in the world. However, the changes that have occurred, show a decrease of the ability of the United States in solving the world’s problems through military superiority, there are new rising powers competing with the United States. All this should lead to understanding of the front line moved East from their historical place in the West. We understand that protecting themselves and their national security becomes a private matter of each country.