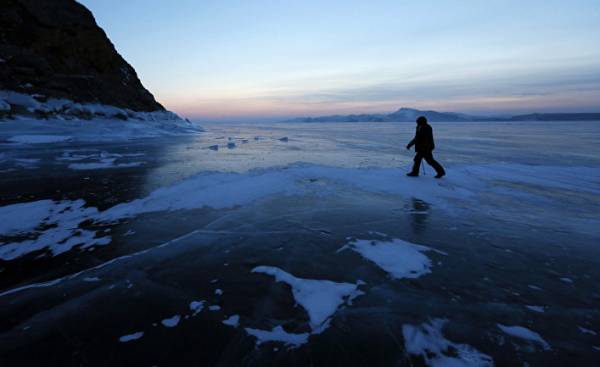 To deliver 12 tons of pasta, vegetable oil and croissants with chocolate in lying beyond the Arctic circle to the village of White Mountain, every winter a group of men sits in the truck and hits the road, which leads through the frozen lakes and rushing rivers. When under a transparent ice surface suddenly see the rushing waters of the Indigirka, understand what is a risky enterprise. This convinced Chapple, who decided to join the Russian drivers to go with them on a flight. His photo report from Yakutia, called On Siberia”s Ice Highway literally chills the blood.

Wirtualna Polska: it was just the cold or hellishly, horribly, unimaginably cold?

Amos Chapple (Amos Chapple): it Was very cold. If I were to go there in January or February, the temperature went down to -50°C, and was only -35°C. it is very pleasant when the weather we were treated and warmed my to -20°C. in the truck was unbearably hot and stuffy.

And it was the unbearable heat?

— Yes! Imagine a truck, and it wrapped up the four men. Local machine can endure the extreme cold. All night we slept when the heating is on, which allows drivers to withstand even the scorching frost. But for milder weather conditions these trucks are not fitted, heating cannot be adjusted. It can either enable or disable, so it was a little too hot, I tried to open the Windows and everything.

In this flight did you learn to swear?

— Oh, Yes. I learned a lot of Russian expletives. The language spoken by the driver Ruslan and the other men involved in this “business” — such an incredibly, incredibly rough, sometimes it begins to seem ridiculous. It sounds like in the most banal situations, for example when the car is stopped in traffic. I had the feeling that I constantly hear bizarre “poetry of the working class”. The Russians skillfully speak the language and use it very charismatically. Curiously, Ruslan was a faithful guy. Once when we were driving, the icon of the virgin fell to the floor, and he immediately stopped the truck, picked it up, kissed it, and put in place.

But returning to the question, it was not my first meeting with expletives in those parts. Some time ago I did a project on hunters for the tusks of mammoths in Siberia. There was such an invasion of mosquitoes that is difficult to describe with words. It was a real hell: everywhere, constantly, in every inch of your body and mosquitoes. I once tried to eat something, and these monsters crept into his mouth, sat down on the tongue. I broke down and cried: “them motherfuckers!” The people I was shooting, did not know English, but understood what I was swearing in his language. That word became my nickname. When they have something they wanted me, they said “Hey, them motherfuckers!” (laughs).

— How did it happen that living in Prague a guy from New Zealand was in the same truck with the Russians, who carry products in a remote Siberian village? You’ve seen too many of the popular U.S. program Ice Road Truckers about truckers in Alaska and decided to go to the “masculine journey”?

— No, program just was I saw her later, when he invented the project, and therefore could not call him as intended — “Ice road truckers”. About truck drivers in Siberia, I found out by accident many years ago, upon seeing a photo of one local blogger. In the picture was a picture of men who are preparing to go into flight, people involved in one of the most dangerous professions in the world. The threat has been etched in their faces. Photography interested me, I began to ponder what happens next.

— And you decided to learn it myself?

Yes. I’m working on “Radio Liberty”. My goal is to make photos that are not associated with news, but don’t leave the audience indifferent. So I wrote the blogger who made that picture, he invited me to Yakutsk and introduced me to his nephew driver the “ice truck”. The whole situation was pretty stupid, because when I met this guy, I realized that to go with him, don’t want to. He was very young, and he didn’t seem too responsible, and I knew that the journey will be difficult. I poked around in the garage and met with Ruslan, which I thought was hilarious, but at the same time smart and sensible.

— He immediately agreed to take you with me?

— No, first we had to negotiate the terms, including financial. For the opportunity to take part in the trip, I had, of course, to pay.

— You quickly found out that on the track reign very different laws than in a “normal” world, for example, that you cannot urinate in front of a truck.

— I learned very quickly, scary guys yelled at me. They have this superstition that peeing only behind the truck, otherwise you will incur misfortune (laughs).

— What have you learned?

In some parts of Siberia, the landscape looks ethereal. The ice which covers all around, reminiscent of the glaze in some sugar Kingdom. Basically everywhere was snow, but walking through the valleys the wind had exposed the fragments of a magnificent pure ice, under which the fast flowing water. Stunning and scary view at the same time. At that moment I realized what I got.

— It was the most dangerous and the most terrible journey of my life.

— You said that you still dream of cracking the ice under the wheels. This kind of specific situation?

The sound of cracking ice reminds the sound of breaking glass. When we went on the frozen river, I heard it and knew what it meant. The wheels of the car fell into the frost-bound surface. The sound was from my side, and I knew that I would go to the bottom first and the top will be three other guys who want at any cost to get out of the car. Fortunately, all went well. We were able to steer and use the chains to save the car.

Some were less lucky?

— Unfortunately, Yes. On your way, we met three tracks remaining from the machines, which broke the ice. I know the history one. In the same year, when I started this journey, one of polynyas failed two trucks. The driver of the first drowned, and the driver of the second managed to get out of sunken car. The man was soaked through and got severe frostbite, because the frost reached -40°C. He was lucky because he noticed a fisherman and was taken to the hospital.

When I was in Siberia, happened another incident. The driver of the truck lost control on the road and fell down a forty-meter cliff. The machine was shattered to pieces, the man didn’t have a chance. I saw this truck. So to call this profession one of the most dangerous in Russia — is not an exaggeration.

— Are you afraid to die?

— I feared not death, but how can I die on this track. I could be under the ice, in the incredibly cold water, trying to get out of the trap and find a crack through which you can get to the surface. I could pick up for, and I would have looked through the transparent ice of the world, which will never see. It is difficult to imagine a more terrible death. I remember one time we were driving too fast and in my brain flashed the thought: well, if something happens now, I lose consciousness and don’t know die.

— Ruslan, who has a wife and children, is engaged in this work for nine years, during one trip, he gets $ 600. This is the only opportunity to feed a family or partly dependent on adrenaline?

— I was thinking about that. On the one hand, a matter of money, but he just loves it. He is a very good driver, it was clear that in complex situations the danger turns him on. I think he, like other drivers, proud of his work. It is complicated, full of problems and challenges of life. It seems these guys it is a pleasure.

— I have the distinct feeling that you love extreme conditions. In the project Chernobyl”s Reindeer you took radioactive reindeer in Norway, and The Mammoth of Pirates, as you yourself mentioned, was accompanied by people involved in in Siberia, illegal mining of tusks of mammoths.

— Few photographers are willing to work in truly challenging conditions. The colder it is, the more likely that you will not have competitors. I decided that this is a good option (laughs).

In the places I visited while traveling in the White Mountain, to get very difficult. You can get there only in winter, because in summer the path is blocked by a roaring rapid river, through which there is no crossing. To see this, we need to fly in a helicopter, and it is very expensive. I was lucky that I watched it.

— There were moments when you covered the rapture?

— Of course. Although I’m not a believer, I experienced a kind of spiritual experience. After a hard day, when our truck broke the ice, I was discouraged and felt exhausted. Night I woke up and saw the Aurora, it was something incredible. Saw this strange green light, I felt that I received a sign from above.

— Photo of the Aurora is your favorite picture from this series?

— I think that in this project there are no pictures with the “wow effect”, the impression the entire series as a whole. But, perhaps, my favorite picture is this one, which shows washable Ruslan. When we arrived with the cargo in place, we were finally able to eat normal food (by the way, we only ate instant noodles, bread, mayonnaise and cheese) and wash. Sitting in the tub Ruslan looks relaxed, calm. The sense of danger is gone, all the emotion after the journey sleeping.

Please check the facts: how many days have you not washed?

Six. Imagine: no shower, no changing clothes, with all those hot nights.

— The crew you had, perhaps fragrant.

— Wasn’t so bad. “Spoil the statistics” one I because I was sweating from fear (laughs).