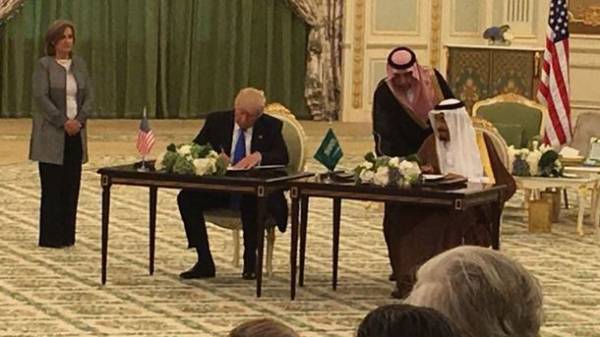 The US President Donald trump, who on Saturday began his first official trip abroad with a visit to Saudi Arabia, and Saudi king Salman bin Abdulaziz signed an agreement on the supply of military equipment to American 110 billion dollars, reports Voice of America.

At the beginning of the meeting, the king presented the President of the United States Donald Trump, the highest award of the Kingdom of civil merit. The ceremony was held at the Royal Palace in the capital Riyadh. King Salman awarded the U.S. President the gold Medal of king Abdel-Aziz Ibn Saud.

Then the ceremony of signing of a military agreement for the supply of American military equipment to Saudi Arabia in the amount of 110 billion dollars.
Saudi Arabia became the first country trump attends during his first trip outside the United States as President.