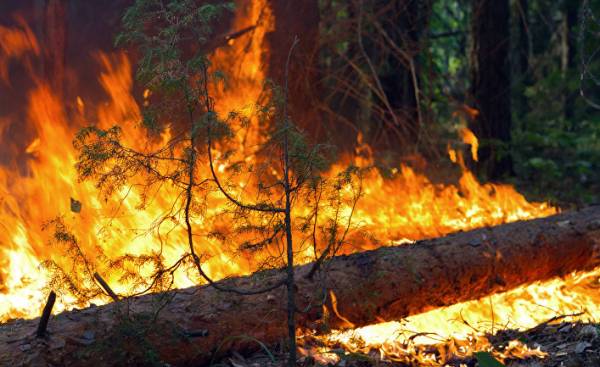 Moscow — 135 thousand people are struggling to put out the endless forest fires in Siberia. Last year, the fires have covered the territory of equal area of Norway. The consequences for the environment are terrifying.

“This is like war, only worse,” says the desperate Russian woman in Buryatia TV channel “Vesti”. The village of Bubnivka burned down as a result of forest fires of Siberia in may.

“We saw burning grass, and as fire is coming to the village,” said the woman.

Within one hour the flames had reached 59 houses, a school, a kindergarten, a shop and everything that was in the village.

“Everything burned for a moment. Now we have nothing left”.

Smoke, ash and pungent smell of sulfur that had the opportunity to experience many cities in Russia in April and may.

Still in Russia this year was raging about 200 major forest fires.

“A cloud of smoke from forest fires extends for 4,000 kilometers from Krasnoyarsk to Moscow”, — said the expert on forest fires Gregory Coxin of the Russian branch of Greenpeace.

He put out forest fires all spring.

“In fact, now the worst is over. But we know that in July and August, it will be much worse,” says Coxen.

According to the Russian EMERCOM, to fighting forest fires involved 135 thousand rescuers and 76 aircraft.

Such changes in climate, such as drought, high temperatures and longer summers lead to the emergence of larger and more dangerous fires.

But the immediate explanation of the ecological disaster that sounds much more banal.

The analysis of data obtained from satellites by Russian environmental organizations, shows that in 2016, burned territory, by area, in excess of continental Norway.

• Fires contribute to air pollution and emissions of large amounts of dangerous for health hanging in the air of dust.

• The unique Siberian forest fires cause harm and also a number of rare fauna and flora.

According to the official data of the Russian office of forestry, the scale of the fires is much smaller.

The reason is that the local authorities are afraid to report on the fires. After all the Moscow authorities decided that the number of forest fires should be reduced.

A big forest fire in Magadan in the far East of Russia last week shows how you can manipulate the facts.

May 13 local authorities in Magadan claimed that they were able to extinguish the fire on the territory of 2.3 square kilometers.

“Almost all forest fires to blame people, and even strong wind”, says the Russian Ministry of emergency situations summary on the situation with forest fires that occurred at the moment.

Every spring and autumn the peasants and summer residents prefer to burn grass, garbage and waste, not to take them.

“They do it to save money. But that’s pure idiocy, besides it is dangerous to life,” says Coxen.

In the region 51 a complete ban on cultivation of fires, burning last year’s grass, garbage and debris, said Russian emergencies Ministry in an interview with RIA Novosti.

A fire that destroyed a small village in Buryatia began due to the dangling electric wires, a strong wind there is a short circuit.

Another cause of fires is that people left many areas in Siberia and the far East.

“People who could clear the land, remove debris and put out fires as they arise, not left”, — writes the Russian environmental activists on the Forestry forum Russian Greenpeace.

“In many places only the retired”.

The leaders of the Ministry of emergency situations sent in resignation

With the emergence of the first big forest fires before the announcement of the Russian Ministry of emergency situations of state of emergency two weeks later.

Then the fire engulfed an area of 3 000 square kilometers.

On may 1, President Vladimir Putin fired two representatives of the Ministry without explanation.