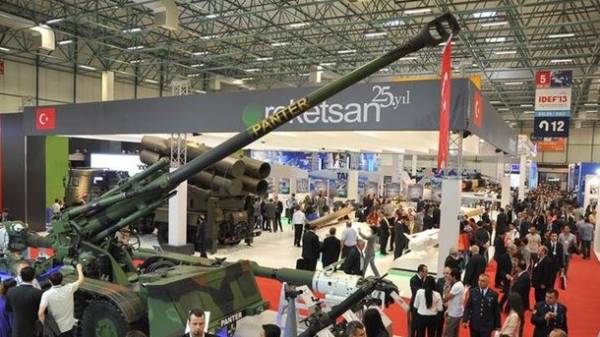 Turkey hosted the international exhibition IDEF-2017, which presented the new products of the Ukrainian military-industrial complex. According to the General Director of “Ukroboronprom” Roman Romanov, Ukrainian and Turkish sides signed at the exhibition several agreements that implement the projects related to the production of munitions, and various aircraft. “Ukroboronprom” consider the results of the Turkish exhibition is a real breakthrough, because until now the military cooperation of Ukraine with NATO countries, which include Turkey, it was episodic.

TURKEY TRIP. International exhibition IDEF-2017 was held in Turkey from 9 to 12 may. Their products put about 800 companies from more than 50 countries. “Ukroboronprom” has shown promising armored vehicles — armored personnel carriers BTR-3E1, the armored vehicle “Dozor-B” and the newest tank BM “Oplot”. On the Ukrainian stand was and combat robot “the Phantom” with ATGM “Barrier” (on “Phantom” and other fighting robots that are used in various armies of the world, “Today” already told). Visitors saw domestic portable launcher, created in the Kyiv design Bureau “Luch”. The device has an internal processor, allowing to fire with the features of the environment. Was submitted and development of the Ukrainian aviation enterprise “Antonov”.

Visited IDEF-2017 NSDC Secretary Oleksandr Turchynov called the Ukrainian exposition was the most ambitious in the time of independence of Ukraine! She attracted interest from the Turkish side. So, the Turkish company ASELSAN and the state enterprise “Antonov” has signed a Memorandum of understanding for the equipment of aircraft of the An-148 avionics. The work should start with the passenger aircraft An-158 (the further development of the An-148) and military transport An-178. Almost simultaneously with this event, “Antonov” announced plans for the establishment of early warning aircraft (AWACS) based on the An-148.

As already reported, “Today”, as a base for the AWACS aircraft was considered An-178, which was presented at the Kiev aviadelivery September 16-18, 2016. The AWACS aircraft is actually flying radar designed to detect targets in the air, on land and on water, as well as coordination of allied forces. Such aircraft are in service in 19 countries, including the US, Saudi Arabia, and Russia.

According to the Director of information and consulting company defense Express Serhiy Zgurets, Ukrainian army must be at least three AWACS aircraft — one for repairs, one ready and one on duty. The most important element of this plane is the radar itself, which, according to Zgurets, Ukrainian side at the time, offered the Swedish company Saab (aircraft with similar equipment valued at $670 million in 2014, placed at the disposal of the army of Saudi Arabia). In Ukraine, apparently, decided to stay on the Turkish version.

In addition, enterprises of “Ukroboronprom” signed a cooperation agreement with Turkish MKEK Corporation, which is a major manufacturer of explosives, ammunition for small arms, heavy weapons, and artillery systems, standing on the armament of the Turkish army. “It’s no secret that the problem of munitions in Ukraine becoming more acute. Lugansk cartridge works for me, and the statements about creating your own ammunition production still remain unfulfilled,” explained the importance of this event, the expert on military-industrial complex Maksim Glushchenko.

And finally, at IDEF 2017 signed a Memorandum on cooperation between the “Ukroboronprom” and the Corporation Turkish Aerospace Industries. The document concerns the development of different models of drones, including attack devices. Maxim Gluschenko thinks this trend is very relevant: “the Military do not have modern machines needs met by 5-7%”. According to the expert, the fighting in the Donbass gave impetus to the development of unmanned aviation in Ukraine. Today this topic are about thirty firms, and some of them have already presented a full-class car of the field of battle, which have successfully passed the departmental test. “Huge plus five to ten times lower price than their Western counterparts. But there is a downside — the main components of foreign production. And access to them from private manufacturers limited,” — said Maxim Glushchenko. According to him, cooperation with foreign companies will help speed up the creation of tactical and strategic unmanned systems, but should pay attention to the fact that even in today’s conditions in Ukraine have been developing in these classes: “And the state would be cheaper to maintain them than to buy expensive Western models”. 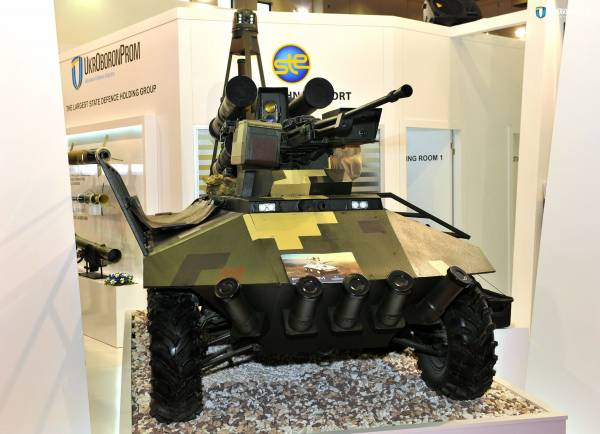 Combat robot “the Phantom”. Ukrainian products are interested in the Turkish side

WITH WHOM WE COOPERATE. The results of the exhibition “Ukroboronprom” is considered a breakthrough. “Cooperation with Turkey, a member country of NATO with a powerful military-industrial complex, is important to us. Within the framework of IDEF-2017 was signed several key agreements that allow you to implement promising projects in various fields, including the production of munitions, the creation of armed drones and other aviation equipment,” — said General Director of “Ukroboronprom” Roman Romanov.

Until now, the Ukrainian defense industry cooperation with NATO was sporadic. You may recall precision guided missile Falarick, which in 2010 developed the Kiev CB “Ray” commissioned by the Belgian company CMI. Another NATO partner Ukraine is Poland. In the late 90-ies of the Kharkiv design Bureau. Morozov was equipped with Soviet T-72B 120-mm gun under NATO unitary munitions (tank was renamed the T-72-120). In the interests of this country in 2005-2006 were upgraded BTR-80. But the creation of a joint venture with a Polish manufacturer of bulletproof vests Lyubava ran into bureaucratic problems inside Ukraine. Much delayed construction of a new Ukrainian Corvette, which was supposed to happen with the participation of foreign companies, as well as the project of deep modernization of Mi-24 with the participation of the French company Sagem.

During the war in the Donbass, in the years 2014-2016, foreign aid to the Ukraine was of “non-lethal”. The champion in this regard were the United States, which, according to the defense Ministry, has provided Ukraine assistance in the amount of $175 million In total, according to Defence experts Express, the West almost never shares with Ukraine its achievements. “Starting in 2015, deliveries to Ukraine of the circuitry, components and assemblies required for the manufacture of military equipment, is limited. It is not possible to provide a sufficient competitive level to new samples of military equipment, which are developed and manufactured in Ukraine. The same methods of individual countries stand in relation to Russia, against which, unlike Ukraine, the sanctions,” — noted in Defence Express.

However, according to Maxim Glushchenko, the Memorandum signed in Turkey, yet are only letters of intent. “At this stage it is difficult to say exactly which projects will be implemented. We have more or less clear information in two areas — cooperation in the production of ammunition and drones. But if cooperation between the two countries will have real features in the form of signed contracts and implemented bilateral projects, it will be a positive shift for our defense,” — said the “Today” expert.