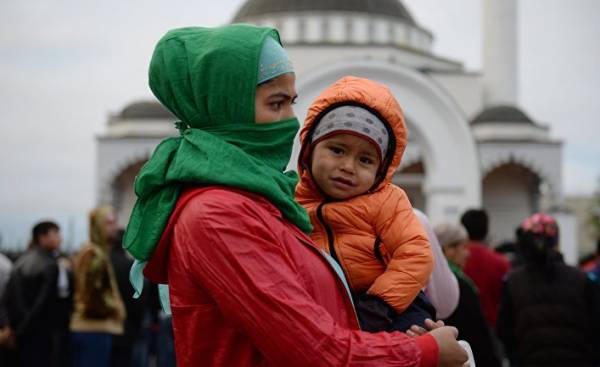 Russia has joined the list of countries in which women are forbidden to wear the hijab. The decision was very controversial. The Minister of education of the Russian Federation Olga Vasilieva was supported by the decision in one of the villages the decision to ban the wearing of hijab by pupils and teachers. Despite the freedom of religion advocated in the West, in most Western countries — including in Russia — it is forbidden to wear the hijab. Many do not agree with this decision. Among them — the President of Chechnya Ramzan Kadyrov.

The President of Chechnya Ramzan Kadyrov has criticized Russia’s desire to ban the hijab in public places and schools, saying that “the ban of the hijab — a fatal step for the Russian.” He noted that Russia is a “multinational country and a country of many religions”.

The channel “Russia Today” quotes Kadyrov’s comments, which not only stresses the need for a waiver of these steps, saying that they are dangerous to society, but also suggests the need for encouragement and support from Russia in all that concerns religious and cultural traditions.

The ban on the hijab in the Russian village

The issue of hijab came about after the Minister of education and science of Russia Olga Vasilyeva welcomed the decision to ban the wearing of the hijab by pupils and teachers in one of the villages of Mordovia.

In February 2015 the Supreme court of Russia upheld the decision of the court of Mordovia ban on wearing clothing indicating religious affiliation and other religious paraphernalia in schools, according to “Russia Today”.

Stavropol Krai was the first Russian region, which had banned the wearing of the hijab. The decision was rendered by the Supreme court of Russia in July 2013.

Russia — not the first

Russia — not the first country, which adopted a decision to ban the hijab. In some European countries, the first of which were the Netherlands and France, a ban on the wearing of the niqab and veil for the face in public places. In the Netherlands, the Council of the house of representatives last week voted for a bill prohibiting women from wearing the niqab in public places. For violation of this law can face a fine in the amount of 410 euros.

According to the Agency The Associated Press, the Minister of internal Affairs of the Netherlands Ronald Plasterk announced his intention to seek a complete ban on the hijab in the following year.

France became the first European country to ban the wearing of hijab in public places. Bans have started to appear in 2004, when he began the harassment of students in public schools due to the presence of religious symbols on their clothes. In 2011, the government imposed a complete ban on the veil for the face. Women wearing it will be fined 150 euros, and any man who forces a woman to wear anything covering the face, will receive a penalty of up to 30 thousand euros.

In Belgium followed in the footsteps of France. In 2011 approved a law banning the niqab and any type of clothing that conceals people’s faces in public places.

Women who do not observe this law shall be liable to imprisonment for seven days, and alternatively may pay a penalty in the amount of EUR 1378.