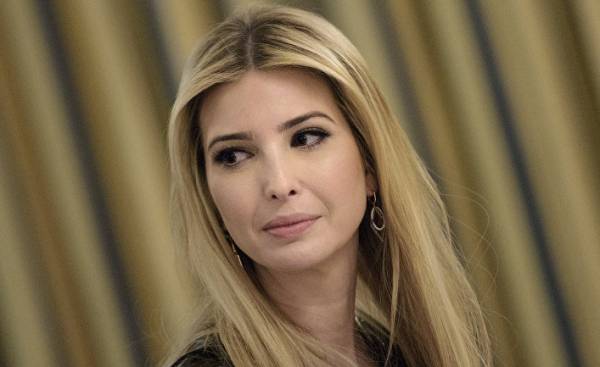 The eldest daughter of US President Ivanka trump meets for several weeks with representatives of the us administration to discuss topics such as strengthening the role of women in the economy.

She always acts as an active fighter for the rights of women workers. She also willingly calls himself a “feminist.” At the summit Women20, which first took place in late April in Berlin, Ivanka trump has proven herself as a confident young woman and in her playful colorful dress, she created a fresh contrast to the outfits kantslerin Angela Merkel and IMF chief Christine Lagarde (Christine Lagarde). As if emancipated neither looked to trump, it is a kind of extended hand of the female US President Donald trump. Female — Yes, but a feminist?

When the President of the United States Donald trump and his daughter appear in public, it’s a bit like the juxtaposition of “good COP — bad COP”. While Donald trump in his political career to date was quite undiplomatic and thunderous voice indiscriminately called either “fantastic” or “stupid”, that his daughter seemed the complete opposite of him. Ivanka trump, unlike his father, stands in a controlled and quite reserved behaviour, and says a calm, quiet voice. During the interview she says immediately, think and then respond in a confident voice. Daughter of the American President quite quickly mastered the role of first lady in the White house instead of Melanie trump, and it seems that she is now soothing voice of family trump.

“First daughter” is a shining star in the rather dismal looking sky as “great America”. A tall blonde in his youth was a model before did not aspire to a career as a business woman, and received with honors the bachelor’s degree. Became meanwhile a 35-year-old female never had any problems with my career. Just two years later after working in one of the companies in real estate, she entered the firm of his father and became its Vice-President. In addition, she has her own house of fashion and jewelry company. Now she is in the White house with her husband Jared Kushner (Jared Kushner) post of adviser to the President. While some of her peers, for example, Paris Hilton (Paris Hilton), in the days of his youth been in the headlines because of the ticklish antics, young trump show determination and tact.

One would quickly come to the conclusion that life Ivanka trump is the perfect, real example of the sort of woman who all his life worked and accumulated rich experience. However, if you step back, it quickly becomes clear that this appearance is deceptive. Her shining smile not just blinds, and almost blinding.

To the question, does trump herself a feminist, she said at the summit Women20 that it is in any case in favour of women workers.

In his recent book, “Women who work” (“Women Who Work”), she encourages women, especially mothers-to not choose between career and motherhood, and to create a healthy “balance between work and life” (“Work-Life-Balance”). However, the claim the mother of three children be called a feminist looks like when it is doubtful. Trump writes for those women who already found their identity in a world dominated by men. She writes for women from the perspective of white, privileged women. A picture emerges, which soon turned to Smoothie-Manhatten-Yoga-Moms than to black women and socially disadvantaged minorities.

For the life of the tramp was not their own difficulties. Unequal pay, discrimination and sexual harassment in the workplace to trump — in spite of the disparaging sexist comments of her father to the women — represented subjects who are not particularly interested.

While Ivanka trump with her husband are — at least outwardly — looking happy and normal marriage, and besides, she has nannies and drivers, single mothers tried hard to combine work with raising children and maintaining the household and not be a “bad” mother. The vast majority of American women do not aspire to a great career, and more than a loaded regular job and raising children.

However, Ivanka trump does not affect this target group not only in the United States. And abroad she barely pays attention to the situation of women in the workplace. Her clothing is fashion house is made to order in China. The fact that the people working there to survive in intolerable for a person critical conditions, it seems to be a little worried. Still she had not yet spoken about these conditions, not to mention the fact, to try to change them.

Feminism is a nasty and ugly

However, many people from the upper strata of society and elites have long been advocated for the poor. Only one condition is not enough to earn trust. However, the hypocrisy of trump in relation to feminism is evident not only because of its origin. The themes that it raises are far from reality and taken out of context. Not to mention the cases. Trump is the Queen of beauty when it comes to perform, not saying anything.

Though trump claims to be a feminist in a world dominated by men, and finds encouraging words for working women. However, feminism does not mean you have to become like “the Cheerleader” on the right side, then say the correct phrase which could cause possibly more applause. She does not look in the corners of society, not on the side of the poor, and looking for a nice and nexecutive topics.

Ivanka trump is not hiding behind a facade, she is them. Externally flawless and confident facade. She is where she should be, without taking up their own position and no resistance. And it is not evident what her words as gentle as her features. So the “first daughter” has one undeniable trait: she’s slippery.