People’s deputies from BPP appealed to the President of Ukraine and the Council of national security and defense because of the continuing for more than two weeks of blockade in the Donbass. This action can lead to economic disaster in Ukraine without coal stop of the enterprise and thermal power plants, and the people will be left without heat in their homes, said a soldier, volunteer and MP from the faction of the BPP Tatiana Rychkova.

“We already did from deputies from the BPP appeal to the President, national security Council, where it will be initiated a round table on which representatives of the Cabinet of Ministers of Ukraine, all participants of the blockade, I hope the President of Ukraine to solve this issue is to convey to people, what are the risks of this blockade in the East,” says Rychkov.

According to her, the blockade of supplies of coal will lead to the fact that throughout the country their work will stop TPP is supplying heat to the homes of Ukrainians.

“I’ll call the numbers and facts – in Kramatorsk thermal coal remained for 10 days, in the Slavic – 10, in Tripoli on 14 and she is in Kiev and the region supplies heat. Zmiivska for 20 days and the Kharkiv city and region. If you disable these TES we will not be able to heat our homes,” – said Rychkov.

Moreover, according to the MP, if you stop Starobilsk thermal power plant, which provides heating in the homes of Mariupol, a frontline city will not only be heat, but will stop large businesses. Thus, in order to translate the existing thermal power plant to work on the coal which is not mined in the occupied territories, it will take 8-9 months and about $ 10 million, says Rychkov.

In addition, according to the MP, from the blockade affected not only the Ukrainian energy sector, but industrial production in Donetsk and Dnipropetrovsk regions. This means that many people may lose their jobs.

“These people, in addition, that will not heat, won’t even work. The state will have to spend money on their social security, their pensions. Therefore, I believe that this will lead to an economic catastrophe in Ukraine”, – said the MP.

Rychkova said that “for such anti-state position is our enemy – the Russian Federation”. According to her, to deal with “smuggling” of goods – as they call their actions the participants of the blockade – must of the SBU, the Prosecutor’s office and courts.

“But I think that this is all political manipulation – all of this blockade,” the MP summed up.

Earlier about the beginning of the blockade controlled by the Ukrainian government of the district said a group of activists called veterans of the volunteer battalions “Donbass” and “Aydar”. At the same time, the first commander of the battalion “Aydar” Sergey Melnichuk has denied the existence in the ranks of the activists of these aidarova. According to him, this former smugglers who are trying to regain control of the flows of illegal goods.

According to the Director of energy programs of the Center for world economy and international relations of national Academy of Sciences Valentin Zemlyansky, in the case of a full block of coal from ORDO, the factor of safety of the Ukrainian energy sector will not last for more than a month. The Minister for the temporarily occupied territories and internally displaced persons Vadim Chernysh said that the possible blocking of the movement of goods with the coal controlled by the Ukrainian government areas of Donbass can lead to power outages across the territory of Ukraine.

The Prosecutor’s office opened criminal proceedings on the fact of blocking of the railway in the Luhansk region. 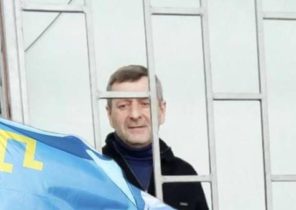