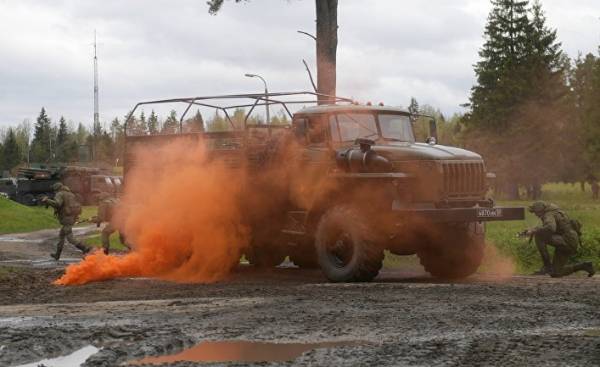 Before the end of the military service (one year) Maxim remains very little, and now he was faced with the question: to continue studying or to sign a contract for further service in the army. If this 20-year-old boy will make his choice in favor of civil life, it becomes a burden to their parents, who due to the economic crisis convinced him to accept the proposal of the military. The Ministry of defence offers the young man a monthly salary of 35 thousand rubles, but his bride, fearing possible risks (for example, sending to Syria) and not wanting to live a nomadic lifestyle threatens to leave him if he decides to stay in the Armed Forces. For a young person is a difficult decision, given that the average salary in the region of the European part of Russia, where he lives, is about 20 thousand rubles.

Case with Maxim is an example of economic motivation, which increases the attractiveness of military service in Russia, which is keen to instil military spirit of young citizens with active Patriotic education. Well-equipped, disciplined and moral support, the Russian military are very different from those guys in a mixed form and footwear (including flip-flops), who shot cigarettes journalists at checkpoints in Chechnya.

In 90-e years Russia has reduced its military expenditures in absolute and relative values. According to estimates of the Stockholm Institute for peace studies (SIPRI), they decreased from 4.9% to 3% of GDP in the period from 1992 (41 billion 932 million dollars) 1998 ($14 billion). Costs started to increase since 1999, when Putin was appointed Prime Minister. Then, according to SIPRI, military spending amounted to 3.3% of GDP and 9% of public spending.

When 17 years ago Putin came to power, the number of Russian army was 1.3 million people. Now there are officially around one million troops, although in reality their from 870 to 900 thousand, says military analyst Alexander Goltz. In the Armed Forces serving soldiers in the military service and contractors. The number of contractors (about 385 thousand) for the first time exceeds the number of conscripts (about 300 thousand), specifies Goltz. The Russian defense Minister Sergei Shoigu is committed to creating a fully professional army.

In addition to the Ministry of defence, its armed forces have the interior Ministry, the emergencies Ministry, the FSB and others, and it is still one million, the expert said. In 2016 Putin has created a National guard, which gave the internal forces. This new power structure, allowing the President more responsive to the situation than with the help of the Ministry of internal Affairs, endowed with, among others, authority to quell riots and maintain public order.

From 2008 to 2012, when the defence Minister was Anatoly Serdyukov, the army had carried out “major reform” of the century, says Goltz. To her — says the expert — “the Russian concept of defense was based on mass mobilization of reservists in case of war”. In peacetime, the army was perceived as the school of basic military training, through which had to pass as many men as possible to in case of need they could call on. But this form of organization was unsuitable for combat militants in Chechnya. In 1999, in the possession of Moscow was not the military part of the population of 65 thousand people, needed to combat “international terrorism” in the North Caucasus. Russia then had only parts of the population of 55 thousand people, which, moreover, were scattered throughout the country. “Army numbered 1.4 million military personnel, and there was no one to fight,” said the President in 2006.

Serdyukov abolished the system of mass mobilization, reduced the number of military units, staffed them with personnel on a regular basis. This allowed to give them orders directly, and in February 2014, the modernization of the Russian army showed his best result, when on the eve of the annexation of Crimea, Putin’s order of 40 thousand troops were deployed in record time along Russia’s border with Ukraine,” says Goltz.

Serdyukov was fired 130 thousand officers and improved the ratio between the number of soldiers and commanders. Now the army has a more rational structure and, following the American model, depending on the situation, reinforces the combined arms part of the artillery and tanks. Instead of sergeants now contractors who are older and more experienced than conscripts. Early sergeants were conscripts who had to assert his authority with fists, he said.

Among the innovations of the Russian military organization should be mentioned the creation of special operations command, which previously was assigned to the GRU of the Ministry of defence, specifies Goltz. Another innovation is the establishment of troops, cyber defence, about which little is known, as well as the emergence of air and space forces and special troops to protect the Arctic. After approximation of NATO to Russia’s borders following the annexation of Crimea and war in Eastern Ukraine, Moscow returned to the old practice of military units partial composition, said Goltz. The fact is that trying to resist militarily, NATO, Russia is forced to deploy troops along its Western border, from the Arctic to the Black sea. Thus, Moscow is faced with the same task, and the Soviet Union, which are difficult to solve due to the demographic and economic reasons, the expert emphasizes.

Executive Secretary of the NGO Union of committees of soldiers ‘ mothers of Russia Valentina Melnikova confirms that the Russian army was more disciplined than before, but it is believed that after Shoigu replaced Serdyukov as defense Minister in late 2012, the situation began to deteriorate. “In the history of reform of the Armed Forces was very good between 2008 and 2012, when the President was Dmitry Medvedev and defense Minister Serdyukov. In 2012 was done away with bullying because Medvedev and Serdyukov took a bold step, discharged from the army mid-level officers, who were the bearers of this system. Thus, the army went to veterans of the Afghan and Chechen wars, with an injured psyche,” says Secretary of the Union of committees of soldiers ‘ mothers.

According to Melnikova, “Serdyukov gave the orders and controlled their execution, thus preventing suicide and bullying”, and Shoigu is engaged in other matters in particular, “reconstruction of the capture of the Reichstag with the goal of Patriotic education, or the unlawful sending of its soldiers and officers in Ukraine.” According to human rights activist, the Armed Forces are used “as if it were the guerrillas committing acts of sabotage. They go on missions without insignia, not in uniform and without protection from the state, which is provided by employees of special services.”

In the 90-ies, during the Chechen war, the Union of committees of soldiers ‘ mothers received up to 10 thousand complaints a year to the excesses in the Armed Forces. He now receives about a thousand complaints a year, partly because the Russians are more prone to fear. Melnikov said he had received five complaints from the troops of the air defense forces, when they received in February 2014, the order to move to the Russian port of Novorossiysk, had been suddenly transferred to the Autonomous Republic of Crimea (Ukraine) through the Kerch Strait.