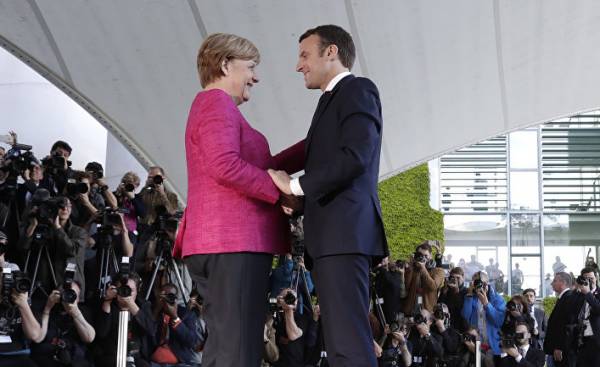 Don’t rush the Germans to start with specific topics of cooperation before go to the deep reforms of the Eurozone. Such was the strategy of the Emmanuel Macron in Berlin during the first official visit abroad as head of state. At a joint press conference with kantslerin, which will compete for a fourth mandate in the September elections, the French President outlined the objectives of the Franco-German Duo.

First of all he mentioned a deal, which offers Europe’s largest economy: structural reforms in France in exchange for changes in the Eurozone. “I have to stay in France for in-depth reforms (…), which are necessary for the full restoration of trust between France and Germany, and Madam kantslerin must convince their publics. We need results in the near future and present the reinvention of Europe, he told reporters. — It is necessary that in Europe, less bureaucracy, so she could protect the people (…). Those who believe in Europe must prove to others that this Europe works.”

The path will be long. To be held on 24 September parliamentary elections in Germany, the two leaders want to agree on is mentioned by Emmanuel Macron “short-term reforms.” They mentioned three projects: the formation of the European law on asylum-reform of the European Directive on temporary work in another state, the introduction of “commercial reciprocity”. “All these issues affect the daily lives of our citizens and enterprises”, — said the President of France.

First of all, the right to asylum. Although General rules exist right now, the Dublin regulation of 2003, incur sharp criticism. His task is not to give applying for asylum is a person to do so in several countries. In practice it turns out that you can apply only in the countries which receive these people (in particular Italy and Greece). Now the goal was to arrive at common rules (the duration of the application, etc.), for more effective control over migration flows and their distribution.

With regard to the Directive on temporary work, the process of amending already running, however, the States of Eastern Europe are strongly resisting it. Will Paris and Berlin to convince other countries of the need for more active struggle against violations and enforce the rule of “equal work — equal pay”? For this purpose two European heavyweights need to advocate for the collection of social security contributions in the country where they are temporarily working man, not in his native country, as is happening now.

Regarding mentioned by Emmanuel Macron “trade reciprocity”, it could be the first stage (or end?) the law on priority procurement of European products, which it offers for the public sector. In particular, it is planned to introduce restrictions for companies from countries that do not open their government contracts to European companies. It concerns including the United States. In 2012, the European Commission tried to pass a law in this direction: it was intended to close access to public procurement for countries that do not want to discuss the contract. However, the proposal was blocked by a number of member States, reminds the informed source. “Germany has taken a cautious position on this issue and openly supported the offer,” he says. In consequence, the EU until now has been limited to free trade agreements (with South Korea, Vietnam and Canada).

Now the Germans are showing themselves much more active. Sent in in February in Brussels a joint letter to Paris, Berlin and Rome, formally requested to do with this topic. “European companies still face the considerable challenge of equitable access in a number of countries, while the European market is open to competition,” expressed concern about holding then a post of economy Minister Michel Sapen (Michel Sapin) and his colleagues.

In addition, the letter focuses on control over foreign investments. Germany was not to the soul a number of Chinese acquisitions in the industry in 2016 (particularly with regard to the purchase of Kuka company Midea and KraussMaffei Group Corporation ChemChina). At the end of October last year, the Federal government blocked the purchase of Aixtron (manufacturer of equipment for the electronics industry) Fujian Grand Chip Investment Fund. “In recent years, non-European investors take control of an increasing number of European companies that possess a key in the strategic plan technology — noted with alarm the Ministers in the letter.- While European investors do not enjoy the same rights in the countries of non-European investors.” So they appealed to the European Commission a request to introduce General rules to protect European strategic industries.

Right now you need to quickly get results, Emmanuel macron and German Chancellor Angela Merkel affect the initiatives and projects. Nevertheless, they still need to convince the Northern countries, which traditionally stronger hold on free trade. Anyway, the situation in the question of trade, of course, was set in motion. Now the agencies are walking two proposals for strengthening the instruments of “trade protection” of dumping, which, if all goes well, should be taken in the coming months. In addition, last week the European Commission presented a paper on the secondary effects of globalization and the need to pay more attention to those who are “lost” from her.

Emmanuel macron and German Chancellor Angela Merkel also agreed on joint work on “bilateral projects”, which range from cooperation in the digital sphere to “tax convergence” (this applies, in particular, the total bet for businesses), education and security.

Besides, the two leaders came to an agreement about a “common road map” to reform the EU and the Eurozone that is “extremely important,” according to Emmanuel Macron. But while the specific content of this General position remains quite vague. The President of France advocates the creation of a “European Foundation”, it has its own budget for the Eurozone. Her “we need a vigorous policy in the sphere of public and private investment, and also means investing new money and, therefore, budget opportunities,” he said. Then he calmed kantslerin about a possible unification of the debts of member States that disagree in Germany: “In my project never had the so-called Eurobonds (…). I am not a supporter of the Union of the old debt, because it leads to irresponsible politics: those who made efforts, do not receive reward”.

Whatever it was, the two leaders are not against potential changes in European agreements. “If we explain why, for what purpose and for what results, Germany would be ready” — he made a gesture of openness, Angela Merkel. “We are not always a priori share the same opinion (…), we still have much work to do” — while at the same time stressed kantslerin. In other words, Europe is still moving forward in small steps.