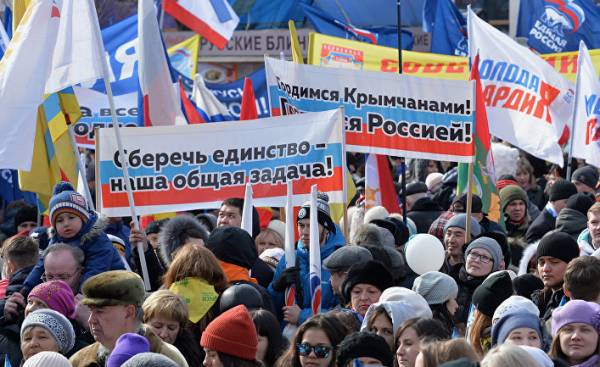 The euphoria of the annexation of Crimea the Russians have significantly weakened under the pressure of socio-economic problems due to falling oil prices and Western sanctions over the occupation of the Ukrainian territories. Crimean topic is losing its relevance and the only thing that still does not allow to forget about the Peninsula is the construction of the Kerch bridge, which by law in Russia claim the title of “project of the century”.

The main tone in the formation of not only politicians but also public opinion in Russia sets its President. Therefore, Putin’s speech is the best show the attitude of the Russian authorities, and after it — and the Russian society, to Crimea. So, in December 2014, in the annual message of Vladimir Putin to the Federal Assembly the theme of the Crimea was the key — the Russian President has used the word “Crimea” and “Crimean” 13 times. He talked about the historical significance of the “reunification” of the Peninsula with Russia, emphasizing the legitimacy of the March “referendum”. About the sacred role of Crimea in Russian history, by appealing to the baptism of Prince Vladimir in Chersonesus. He promised the Crimea “heavenly life”, telling about the adopted development programs of the Peninsula. “There will be created favorable conditions for business development, agricultural and tourism sectors, industry and Maritime transport”, — assured the Crimeans master of the Kremlin.

However, a year later the theme of the Crimea faded against the backdrop of military operation in Syria, Putin in the speech referred to the Peninsula only a couple of times, focusing on the “crucial” importance of the annexation for Russia. “We have repeatedly stood up fundamental historical choice of ways of further development. And another milestone we have passed in 2014, when the reunification of the Crimea and Sevastopol with Russia,” pathetic broadcast, the Russian President, considering the act a violation of international law as a sign of strength of the Russian nation, consolidated the “common values and common goals.”

But in December 2016 in Putin’s speech the theme of the Crimea flashed only once — in the context of the construction of a bridge across the Kerch Strait. And this means that the interest in the Crimea will continue to weaken. The fact that their “sacred” role in the unity of the Russians and raising the rating of the Russian President Peninsula has been completed.

The Russians on the Crimea remind annually in February-March polls. Every year the number of Russians who believe that “Crimea is Russia” rose from 89% in March 2014 to 97% in 2017.

But with respect to the use of the annexation of Russians vary depending on who conducts the polls. According to VTSIOM, over three years, the number of supporters the positive impact of “occurrence” of the Crimea to Russia has increased from 75 to 78%, and according to polls “Levada-center”, in contrast, declined over the same period, from 70 to 64%.

By the way, the number of those who saw in the annexation negative for Russia, according to VTSIOM, for 2014-16 will be presented. increased, and in 2017 have declined sharply, from 22% to 13%. What influenced such a metamorphosis in the minds of Russians, it is difficult to say whether the power of propaganda, whether the implementation of the recommendations of comrade Stalin and the “right” calculation. The data “Levada-the centre” show a steady increase in the number dissatisfied with the annexation of 18 to 23% over three years.

On the other hand, reduced the number of Russians who are ready for additional financial spending for the sake of Crimea. According to opinion polls, the number of those who oppose additional funding for “the new Russian region”, in 2017 reached 84%, an increase over the three years at 21%. More than half of respondents “Levada-the centre” (55%) strongly against the funding of the Crimea by reducing funds for social programs in Russia. In General, the logic of the Russians on the Peninsula is simple: Crimea is ours, but to keep it we don’t want — let them earn.

No less interesting and tourist dynamics on the Peninsula, which ceased to be for Russians abroad. In 2014-16 will be presented. residents of Russia went to the Crimea for Patriotic reasons or out of curiosity. And many were disappointed that the Russians splashed on the pages of the blogosphere. Tourism Crimea was not “sacred” and “shovels”, the Crimean — greedy “tufts”, which is to meet “liberators” with bread and salt, began to tear up with three skins, the decline in tourist arrivals. High prices and low service overshadowed the Patriotic feelings, therefore, when Turkey became accessible to Russians, they immediately abandoned the Crimea. The result for the may holidays in the Crimea have always considered a rehearsal of the holiday season, in 2017, the Peninsula came to 38% less tourists than last year.

The only thing that still arouses the interest of the Russians is the construction of the Kerch bridge, which in Russia became a “project of the century” like a Soviet analogue of the Baikal-Amur mainline. And while building the bridge, the Crimea some time will flash in the Russian air space, however, is not as top threads. And if the building will have problems, something about it then forget it — especially since the launch of the bridge should take place after the presidential elections, which will likely be the “Swan song” for the theme of the Crimea. Most likely, the date of the election of the Russian President will be postponed to the day of the official annexation of Crimea to establish another victory of Putin. After another ascent to the throne of the Russian President would have been no way to the Crimea.

But in fact the Crimean Russia’s victory was more “Pyrrhic” on the domestic front (a sharp decline in the level of socio-economic development) and international — for three years, Putin failed to achieve recognition by the Russian at least at the level of de facto.

Putin’s regime is desperately in need of quick results. In the first stage, in the Crimea everything went perfectly, but to achieve a legal change to its status in the international arena, the Kremlin could not: the West refuses to recognize the Russian Crimea and at every opportunity reminds that the Peninsula should return to Ukraine. And it’s furiously annoying Putin, whose party on the global chessboard is suitable to disastrous ending.

Therefore, for the Russian leader, in this case the best solution would be as little as possible to remember about the Crimea, leaving for the Peninsula, the role of the coveted trophy in a series of “victories” of the dictator. In the end, after a couple of years instead of “order on Earth” Crimea will be another Russian backwater, which they don’t care.