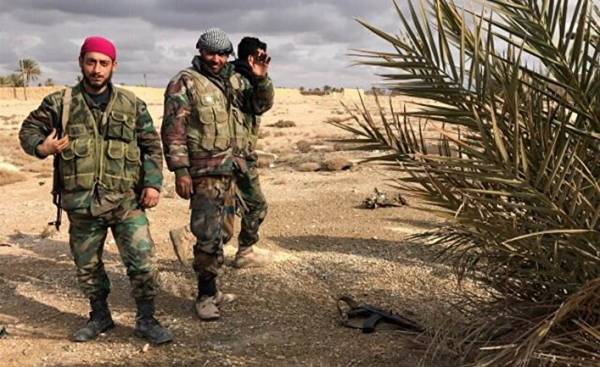 Beirut. — On Thursday, Syrian government troops liberated from militants of the “Islamic state” (banned in Russia organization — approx. TRANS.) the historical city of Palmyra, in doing so with the support of the Lebanese Hezbollah, the Russian army and indirectly the American air strikes.

They have won this victory three months later after ISIS returned to the city under its control due to sudden attack which apparently caught the Syrian army by surprise.

Thursday night on state television read out a statement the Syrian army that it fully controls the Palmyra after the attack, in which defense LIH quickly fell apart.

ISIS militants have returned to Palmyra in December, and it was their first for a year and a half offensive. It has raised fears that the jihadists are again building up their forces. Government forces together with the allies quickly returned to the city under its control, and it indicates that the capture of Palmyra was a temporary aberration and that it happened because of the expansion of the Syrian army, which survives due to support from foreign allies.

The militants are retreating in several directions of its long and rugged front lines in Iraq and Syria, including in the Iraqi city of Mosul and in the suburbs its self-proclaimed capital Raqqa.

Attack on Palmyra was held with the support of Shiite fighters from the Lebanese “Hezbolla”, which in the last five years provide substantial assistance to President Bashar al-Assad, helping it to retain power. The television station of Hezbollah’s Al-Manar showed how combat units of this organization are camping in the desert mountains around Palmyra, and as they step on the town along the rocky desert.

The advancing Syrian forces provided air support to the Russian aircraft, as reported by media, citing defense Minister Sergei Shoigu. The Syrian army, in his statement thanked “friends” for help in carrying out offensive, stressing Russia. Starting in 2015, military intervention, Moscow helped to survive to the Assad regime, causing air strikes and helping ground forces, among whom were enjoying Iranian support for militias.

The Syrian statement says nothing about the US role, which in recent weeks also has stepped up strikes in the area of Palmyra. Over the last 10 days of February, the us military has caused 23 impact on combat ISIS troops, in their tanks, warehouses and command posts, as in its daily report said the Central command. In General, in February, U.S. aircraft struck at Palmyra 45 beats.

Us military deny that coordinated their attacks directly with Russia and the Syrian government. However, previously they mentioned that strikes at Palmyra with the intention that the militants are unable to use captured equipment and weapons elsewhere, where they are fighting against the US-backed military forces.

Over the past two years Palmyra four times passed from hand to hand, and every time its historical monuments were subjected to destruction. Capturing the city a second time, the militants said they destroyed more monuments.

It is too early to talk about the scale of recent destruction. Photos published by the Russian news Agency and widely dispersed on social networks, shows a Syrian soldier standing among the ruins of the Roman amphitheatre, where the Russian orchestra last year gave a concert in honor of the victory. Part of the facade collapsed, however, the amphitheatre remained largely intact.

Celebrities stood up for the semi-finalist “Most intelligent”, which annulled the mcqs on mathematics for headphones in the pocket