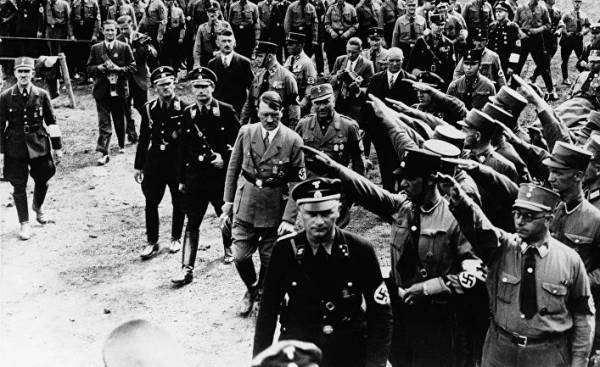 Those who have a clear purpose, able to draw strength from, no one knows where. January 1, 1932 Franz Albrecht Challe wrote in his diary: “And now firing on all cylinders in the new year! Heil Hitler! Long live Germany!” The coming months, as it seemed 18-year-old boy from the town of Altenburg in Thuringia, was to become decisive for his hero — the führer of the NSDAP. And, of course, we played in his favor.

A few months before, on 12 April 1931, Challe first saw Hitler, already at that time managed to become the most famous politician in Germany — it happened in Weimar, at the demonstration dedicated to the overthrow of Wilhelm Fricke (Wilhelm Frick) — the first Minister, representing the NSDAP. Hitler then listened to eight thousand people.

Challe arrived in Weimar from located about a hundred kilometers Altenburg, stood on the sidelines and waited. And then came the long-awaited moment: “Hands soared. The eyes rushed to the right! The music began. Where Hitler stood, raised his hand and saw his indescribable eyes on each group of people. We were next in line!” It was on that Sunday when the leader of the Nazi party met with 12 thousands of his supporters in the Market square, Franz Challe (1913-2001) became an avid fan of the “brown movement”.

Many of the enthusiastic records of Salle entered in a book called “Young Hitlerite Challe. Diaries of a young national socialist,” published by the historian andré Potterton (André Postert) from Dresden. This kind of “artifacts” in our time are rare. In this case the entries of Challa made with boyish, directly demonstrate the blind admiration of a whole generation of people absorbed the ideas of national socialism, as they say, “mother’s milk”. Challe, being the son of a teacher from Altenburg, opened a diary at the age of 16, as a member of the German motion trackers. Soon, however, he felt that this club is not active enough in political and national terms. So he joined the Hitler youth.

“I always think of our German and our movement, and thus, about Adolf Hitler,” wrote Challe. He was truly fascinated by the ideas of national socialism: “Without the Nazis I can not live a full life and to be who I am.” So it is no surprise that he was one of the leaders of the city branch of the Hitler youth. He was engaged in the organization of evenings, meetings, torchlight processions, meetings, dedicated to the personality of the Fuehrer, and endless marches. However, he was often satisfied with the insufficient, in his view, the zeal of their comrades. “Members of the Hitler youth passionately eating ice cream! That says it all. This was completely invisible to their morale! It is very frustrating”.

This “cult of the holidays”, these large-scale theatrical performances, the leaders of the national socialists appealed to the feelings and emotions of the younger generation. “National socialist ideology was not, primarily, an ideological whip,” — said the publisher Postert. “It was the most intoxicating drug that promised people once “accepted” it, immediately the meaning of existence, power and greatness — a sense of elevated importance and ability to affect great things.”

It is somewhat reminiscent of the enthusiasm with which many young people these days perceive the “Islamic state”. It also has a strong influence on their minds, without the help of “powerful” visual images and symbols, promising to fill their lives with meaning. The cult of national socialism at Salla has become a sort of act of protest against parents, against democracy, against the “corrupt and decaying world.” Challe was convinced that national socialism belongs to the future: “Young people without purpose, destroys the world, but Germany needs its sons and calls them: here is your homeland, here is your goal. Germany, Germany and nothing but Germany.”

And the greater was his disappointment, when Hitler was snowed under in the election of the Reich President as the democratic candidate, the elderly Marshal Paul von Hindenburg (Paul von Hindenburg). For the leader of the Nazi party voted only 11.3 million Germans, which amounted to 30.1% of the total number of votes. However, Hitler was able to improve the performance compared to the held shortly before elections to the Reichstag, but he was still far from its majority. Although Challe and happy growth of the number of votes added in the journal: “However, many were disappointed that Hitler won an absolute majority of votes”.

The appointment of Hitler as Reich Chancellor was Franz Salla surprise. “I was somewhat surprised,” he admitted in the diary. “I still can’t believe it. We have a lot of power!”

Challe moved to Dresden and began to learn the carpenter’s, however, the quality of his work suffered from dreams that he indulged in the workplace: “At work I think so much about Germany that it harms the work. But differently I can not.” So sometimes he had to drop out of a hand planer. By his own admission, he every night went to sleep “greeting Hitler on his lips and in your heart.”

In the records of Salle over time, increasingly began to meet racist and xenophobic undertones. So, once on the train he found “absolutely stupid-eyed mulata”. Czech tourists he once contemptuously called them “hucksters sly and sneaky as Jews.” After the Nazi seizure of power in 1933 Challe justify their cruelty: “Sometimes they work too hard, but it does not change anything in a flawless performance and accuracy of the measures”.

The arrest of his father left him indifferent

By the time the young man has managed to quarrel with his own father. One being a close friend of the writer Hermann Hesse (Hermann Hesse), enter into greater conflict with the Nazi regime, wrote a critical treatise on Hitler and was eventually arrested by the Gestapo. But son the news of this was left untouched. After the war, he also never distanced himself from the book “Life in the Hitler youth”.

In the diaries of Sulla, which he wrote until 1935, some time recognized the historical documents. Back in the 1930-ies they were reproduced in typewritten font, and this book survived the war, and bombing. The present publication is supplemented with the necessary introduction with explanations of the then historical background and relevant comments. These diaries are a great value because they reflect the greater attractiveness of radical ideas to the young generation.