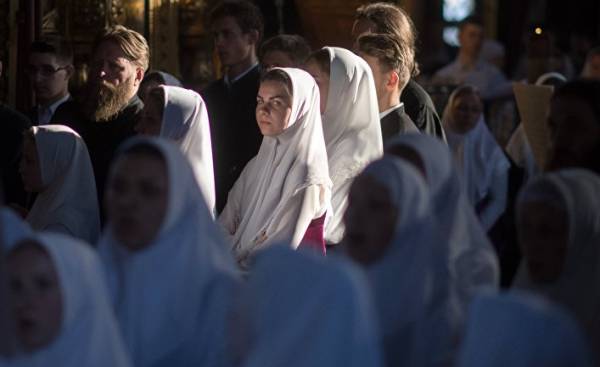 In may 2000, my aunt sent 15-year-old girl from Oregon on vacation to Russia to see my cousin.

“They said I can go home in two weeks,” says Elizabeth Russian newspaper “the Media”.

When Elizabeth in 2015 has crossed the threshold of the American Embassy in Moscow and asked for help about it for a long time nobody heard anything.

For 15 years, Elizabeth had to survive in Siberia, one of the most arid and cold places in the world without electricity, running water, shops and roads — not knowing that there is such a thing: mobile phone.

Her life to a religious sect sheds light on one of the largest and most important conflicts in the history of Russia.

So she was a prisoner in Siberia

Mother Elizabeth came from a family of Russian old believers who fled to China and then to America from Stalin’s persecution.

Aunt Elizabeth had sent on “vacation” in Siberia, because relatives were concerned about how the girl living in the US. Her mother was an alcoholic and was in prison. His father left the family when Elizabeth was five years old.

First, she came from Oregon to Moscow, and from there went to Krasnoyarsk, in Siberia. Then her path lay farther North, first on the helicopter, and then another two days on the river Yenisei. And finally, it was in the swamps by the river Great Dubches.

“No one told me that they bought a ticket just one way,” says Elizabeth.

Not speaking a word of Russian American girl was sent to a secluded Dulcesky convent, which housed 150 women staroveri.

“Received us well, they are good people. But the world they see completely differently than we do,” says Elizabeth.

Her passport seized and burned.

In the monastery, the girl was told that if she tried to run, I will die and will not go to heaven.

Persecution for over 300 years

History of the old believers, who lived in Elizabeth, began in the 17th century when Tsar Alexei and Patriarch concentrated in their hands all power — both over the Church and over the whole of Russia.

Conservatives to obey them, refused and was subjected to harassment, torture and mass destruction.

During Stalin’s purges, they were hiding in the least populated areas in Siberia, breaking all contacts with the outside world.

The gap with the conservatives turned the Russian Church in one of the most powerful instruments of power under the Tsar and under Stalin, when the Russian President.

Today the Russian Orthodox Church is one of the most important allies of President Vladimir Putin who was building a new, nationalist and conservative Russia.

In 1652-1666, the Moscow Patriarch Nikon has carried out several reforms and consolidated his authority over the Russian Church.

The king and the Patriarch reviewed the Bible and Church rites into the part where, in their opinion, the priests in ancient times translated Holy book is wrong. Conservatives stick to the first translation into old Church Slavonic.

Persecution, killings and torture continued until modern times, except for a few periods. Before the revolution, some of the richest families of Industrialists in Russia were old believers.

Before the revolution in 1917, there were about 10 million old believers.

Today in Russia about one million believers, and in other parts of the world — four million.

The Russian Orthodox Church reversed the excommunication of the old believers only in 1974.

Metropolitan of the old believers

“But we remember what they did to us. Worst of all was the Peter I and tsarevna Sofia. And Stalin”.

The head of the approximately one million Russian old believers takes correspondent for Aftenposten in his small Spartan office, located in the heart of Moscow. He gives one of his first interview with a Western newspaper.

“After 350 years of persecution we are now in a Golden age — we can practice our faith freely,” — said the Metropolitan.

— What do you think about the story Elizabeth, which was sent to the monastery?

“In this part of Siberia live the old believers, who do not recognize nor priests, nor me. We have no contacts there,” admits Cornelius.

“They want to be independent. And I have to respect that.”

How Elizabeth managed to survive in Siberia

The life of Elizabeth of conservatives consisted of work and prayers. On Mondays, Wednesdays and Fridays every week were fast, said the girl “Mediazone”.

“I was never beaten, but they forced me to live as well as themselves”.

All the food was prepared and eaten together. As a rule, ate soup, assorted root vegetables, mushrooms, river fish and berries.

“We didn’t eat meat. We were fed twice a day — lunch and dinner. Everything that we ate, we ourselves and grow.”

No milk, no butter in the menu never did. They had no horses, no cows. Salt and some other goods they bartered for once a year when the river was free of ice.

“The ground we plowed themselves. We have been taught to think that if we want to survive, we must adhere strictly to the faith. The work was very heavy.”

Elizabeth was forced to walk in a long skirt, trousers, two pairs of stockings and a scarf.

In winter, it was minus 30. In the short summer months, annoyed a lot of midges.

“In the first year there was no snow only three months.”

The years went by, and Elizabeth was accustomed to the harsh life.

“They told me that I should live to enter the Kingdom of heaven.”

After several centuries of persecution and genocide the Stalinist conservatives have learned well how to hide.

To avoid contact with others who, in their opinion, could destroy their souls, conservatives never went in the forest on the same tracks, so as not to inadvertently pave the path.

Even Russian special forces believes that they have a lot to learn.

When the elite troops last year passed severe school of survival in Siberia, first sent them to the conservatives — to learn different tricks.

In April, Cornelius became the first Metropolitan of the old faith, which has ever met with the Russian head of state.

“We are grateful for the fact that Putin returned to us a few churches,” — said Metropolitan.

His small and modest office shows that the old believers are content with much less than the Patriarch and the leaders of the Russian Orthodox Church that is incredibly rich and drive around Moscow in luxury cars.

“The most important thing is that we are allowed to follow our religion and to speak about our faith. This new, truly historical time,” says Cornelius.

Conservatives urged to move home. Russia needs people who are ready to settle in Siberia and the far East to handle a place.

Harsh life in Siberia led to the fact that Elizabeth was ill, she was exhausted, she developed asthma and allergies.

“They said it was sent to me by God, that’s my cross to bear,” says Elizabeth. But as no help, she was not, in 2015 she decided to escape.

One night she escaped to a nearby monastery, where, as it was known, the old believers were less severe.

A few weeks later the girl arrived to Krasnoyarsk, where she received medical assistance and was taken to hospital.

There she saw her first mobile phone.

And with his help, she contacted members of her family at home in the United States. The aunt that sent her to Russia “on vacation” is long dead.

Today Elizabeth lives in the USA, got a job as a waitress.

She communicates with relatives, but the old believer is no longer. But, thinking about them, does not want to give his surname or to be photographed.

“She no longer wants to speak with journalists,” says one of the Russian friends Elizabeth the correspondent of Aftenposten.

“Although I think that her story will ever form the basis of a book or film”.

“We heard about this case, but, guided by considerations of the protection of individual rights, we such things do not comment,” said Ashley Garrigus (Ashley Garrigus), a press-the Secretary of the Agency of the consular service of the US state Department in Washington.