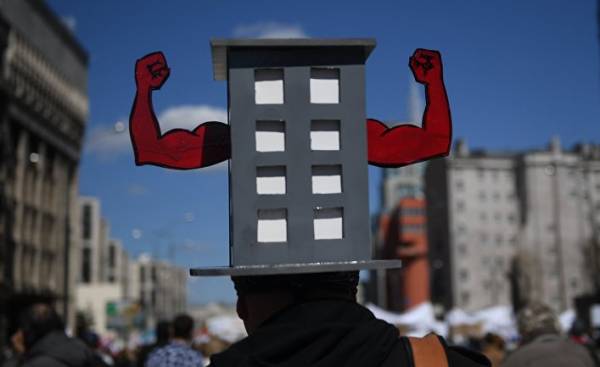 It would seem that all those who live in the many buildings that surrounded the Central part of Moscow should be happy about the move from them. These buildings were built in a huge hurry to eliminate the acute housing shortage after the Second world war. They built in haste, somehow. These tiny apartments called Khrushchev on behalf of Soviet leader Nikita Khrushchev, who started the project, as well as “slums”. But when the Moscow city government has offered residents of Khrushchev appropriate apartments in modern homes away from the city center, to demolish thousands of buildings, they immediately took to the streets to protest.

The organizers claim that on Sunday, the rally came 30 thousand people. This is a serious figure for a country where the authorities are not kindly refer to the protests. (The authorities in typical manner underestimated the turnout, saying that the protesters were eight thousand). However, the police did not intervene. In contrast to the explicitly political opposition rallies aimed against President Vladimir Putin, the kind that was held on April 29, the purpose of this protest was much more specific and meaningful for Russians. Although the rally was not political in its conception, it really says a lot about the habits of the old Soviet and the new Russian reality.

Khrushchev began to build in the late 1950-ies to meet the huge demand for housing in war-torn cities. Many Russians at that time lived in crowded communal apartments, and they were happy to find their own housing, albeit tiny and of low quality. After the collapse of the Soviet Union the inhabitants were often given the opportunity to buy their apartments and thus they receive not only personal space, but private property. But the buildings remained under the control of the state.

Putin initially approved the project of renovations, believing that this proposal is about moving into modern apartments will be extremely popular. But it is clear that he underestimated the magic words of real estate agents: important is a place. A large part of the blocks located near metro stations, and new buildings are often very much removed from them. Residents of Khrushchev immediately concluded that the mayor of Moscow Sergey Sobyanin intends to relocate them to the outskirts, giving expensive land plots close to it contractors. And they wasted no time, started to protest.

Putin immediately stood to their side and said that he would not sign anything that violates the rights of private property owners (for resettlement need a Federal law). Sobyanin left alone. The mayor quickly backed down and promised to evicted residents of the apartments, which will be equivalent not only in size, but at a cost.

It did not convince those who on Sunday came out to protest. “The mayor, don’t make us better, leave it like it is”, read one banner. People no longer consider themselves wards of the state. They see themselves as owners and are demanding a voice in the question of what will happen to their property and their city. Times have changed, Mr Sobyanin.