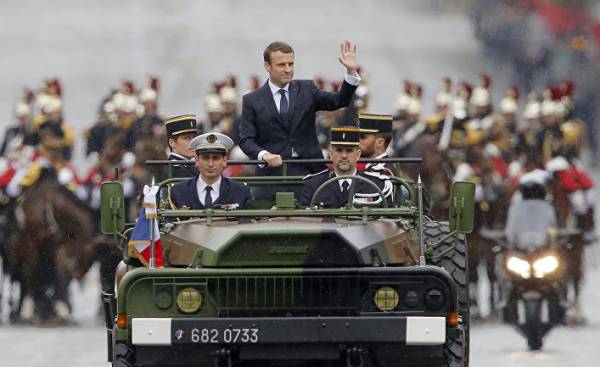 Ended with the victory of Emmanuel Macron election of the President of France has created a favorable momentum for European unity. They gave her a second wind and reinforced the belief that it represents the only solution for France even if EU needs changes that are dictated by years of experience of European construction with its UPS and downs, especially after the UK and the victory of Donald trump, a great supporter of isolationism.

French political life did not allow the victory of marine Le Pen in the second round of the presidential election. A quick historical retrospective allows to remember that in the early 1940-ies in France was 90% Vichy, which voted to dissolve Parliament and transfer all power to Marshal Pétain after the defeat of the German army. Later their share dropped to 20% during the referendum on the independence of Algeria, who held de Gaulle. Then, that number has increased to 22% after the terrorists “Islamic state” (banned in Russia as a terrorist organization — approx.ed.) kill 150 Frenchmen on the streets of Paris, and after the events of 14 July 2016, when the truck crushed a lot of women and children in nice. This proportion remained the same when the supporters broke into the Church and cut the throat of a priest during the service. It has not changed on the background of the terrorist attacks, and the number of French fascists not reached 22% of the number of “lepenica” in light of the presidential election.

Defeated and Russia under Putin. Le Pen has sworn her allegiance after the massacre in Syria. The same goes for françois Fillon, which included in the political program of the Alliance with Russia against terrorism and negotiations with Bashar al-Assad. Fillon was not crucial leader of the French right. This role was supposed to belong to Alain Juppe, who, however, lost in the primaries. After excitation against the Fillon cases of fictitious employment of his wife Penelope from the right-wing candidate managed to gather in the Trocadero 300 thousand people against law enforcement and the media. In any case, his image was finally undermined. Wise people have tried to do so in this critical moment Fillon, left, and Alain Juppe returned with the consent of all the right-wing Gaullist manner. But Fillon insisted, arguing that morality has nothing to do with politics, and right in the end lost the election.

“Islamic state” trying to stir up racism in France, to do citizens with Algerian roots of sacrificial lambs, to promote their expulsion, and becoming a scapegoat for the anger of the French. Anyway, French democracy has shown resilience and has not bent before the storm. Freedom, democracy and Europe have stood his ground (even as she staggered). The victory of Le Pen and her anti-European program would be catastrophic pan-European scale. European enlightenment gave back the obscurantism of the IG, which strived by all means to be sarcastic French dignity and to push for the killings of Muslims in France that brought him to achieving the goal: to destroy them and plunge us into the dark Ages.

If his voice gained strength among Muslims in France, the country of the enlightenment, freedom and tolerance would become a country of hate and malice.

But won the macron, the man who called the war in Algeria (it cost the lives of one million Algerians) a war crime, insisted that the multiculturalism of France, on the path of enlightenment Sartre and Voltaire. Only such thoughts and open political views can fight the obscurantism, which is based on violence, anger, bigotry and hatred. In Lebanon there were a thousand people who supported the racist in the first round of the program Le Pen, although that was provided in case of victory, the deprivation of Lebanese with dual citizenship, French passport.

Macron is committed to solve the economic problem of France, to get rid of complexes with respect to wealth and riches, to share with her new Gaullist ideals that were the Foundation of the greatness of France. Thanks to them it was not just the state, and the idea of living freedom, which strengthened the love of the French for the country.

April 23 and may 7 were milestones for the West. “Islamic state” suffered a serious defeat, and the French Algerians demanded that the fight against ISIS, giving their votes in favor of openness, multiculturalism, and a willingness to call things by their proper names (conflict in Algeria was a war crime).

The same is true of Russia Vladimir Putin, who fiercely defended Le Pen, has not yet had time to dry the blood of the victims of the bombing in Aleppo.

The elections showed that politics still has a morality and the corruption and deal with despotism are not part of the French culture of the enlightenment.