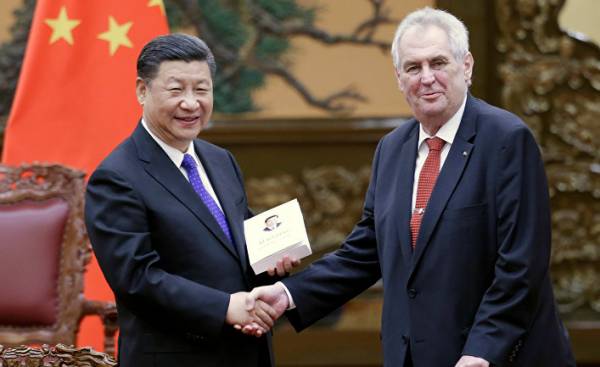 The ongoing visit of President Milos Zeman in China meet the expectations of journalists — both from the point of view of many projects to attract Chinese capital, and remarkable sayings of the Czech leader, first of all, during a bilateral meeting with Russian President Vladimir Putin.

Although the main purpose of the visit Milos Zeman became involved in the forum of “One belt and one road” (the”New silk road” he called, “the most impressive project of the contemporary history”), at least the press closely followed the course of bilateral meeting of the presidents of Czech Republic and Russia.

It should be noted that Milos Zeman was almost the only one of the EU leaders met in Beijing with Vladimir Putin. In addition, the capital of China with the President of Russia communicated only Prime Minister of Greece Alexis Tsipras.

As we know, miloš Zeman has repeatedly spoken out against economic sanctions on Russia, pointing out that they “never produced the expected result.” Interview in Beijing also was more than friendly atmosphere — miloš Zeman expressed the desire to have a conversation in Russian: “it is Not necessary to translate! We all mean some kind of Russian dialect. Maybe a dialect of Central Russia”.

Remembering that last meeting with the Russian President two years ago, also in Beijing, Mr Zeman also joked about his cane, which he uses when walking: “As you can see, I have a stick. I’m an old man, however, in politics working with brain, not with your feet.”

At the beginning of the meeting, the head of Russia Vladimir Putin thanked Milos Zeman for his contribution to the development of Czech-Russian relations, stressing: “We know Your position on Russian-Czech relations, and largely thanks to You our relationship over the past years, in spite of any difficulties, is still maintained at a high level and develop”, — said the Agency ČTK, citing TASS.

The Beijing meeting was the preparations for the visit of miloš Zeman in Moscow, which is scheduled for November this year. “I think that, apart from Moscow, I will visit two interesting region or province, I will travel to Ekaterinburg, and also in Tatarstan, which, incidentally, is the richest province of the Russian Federation”, — said the Czech President.

According to the President of Russia, between Russia and the Czech Republic “in the economy, despite the decline of previous years, at the beginning of this year, a growth of turnover by more than 44%. This is a good sign and a positive trend that we need to preserve.” Milos Zeman believes that the growth of trade is associated with an increase in the Czech Republic the number of tourists from Russia and a gradual increase in incomes, falling on the background of the crisis. According to the Czech President, currently, the real incomes of Russians gradually began to grow, and with them tourism. “I fully agree that we should focus on the development of specific relations,” said Zeman in conversation with Putin.

In addition, the Czech President presented to Vladimir Putin the new Minister of industry and trade of the Czech Republic jiří Havlicek, noting that the Minister as the person who took his post in April, “is not to blame for what happened in the past,” apparently referring to the decrease in the intensity of economic relations in the realities of anti-Russian sanctions.

“After a break of two and a half years there will be a meeting of the intergovernmental Commission, and we expect that it will give a new impulse to our cooperation”, — said Milos Zeman. The Czech President also proposed to create together with Russia.discussion forum.

Press Secretary of the President Jiri Ovcacek after the publication of the replicas wrote in his Twitter that “Journalists are in principle never understand acuity. I am now waiting for the indignant reviews and angry reactions of politicians who like to suck up to the media.”

Indeed, the phrase has not gone unnoticed: policy Czech foreign Minister Lubomir Zaoralek, Minister of culture Daniel Herman, and Deputy Chairman of the party civic Democrats, Martin Kupka and others have condemned the words of Milos Zeman, calling them “very bad joke”. The MEP of the movement ANO Pavel Telicka says that such a statement in the presence of the head of the Russian Federation confirmed that Zeman is not able to perform his presidential duties. According to the Minister of agriculture Mariana Jurecki and Deputy Chairman of the Christian democratic party, “jokes the elimination of journalists in the presence of the President of the country, where journalists die under mysterious circumstances are unfortunate bobble”.

“I was under the impression that President Putin, who wanted to stress their good relations with the head of the Czech state, to hear it was not too pleasant. Although, as we know, Vladimir Putin does not avoid strong expressions,” said about the words of Milos Zeman commentator “Czech Radio” LIBOR dvořák.

As recalled by “Czech Radio Plus”, Russia is one of the most dangerous for journalists of the countries in the world. Since Putin for the first time occupied the presidential chair, and died there, 39 journalists, 13 of them the motive of the murder was not established. The most famous was the murder in an entrance of own house the journalist “the New newspaper” Anna Politkovskaya”. In April of this year in hospital after the attack, the unknown group died Mykola Andryushchenko, engaged in journalistic investigations. Journalists and bloggers is critically expressed in the authorities and the government, points Plus, often face physical attacks, as well as easily find themselves behind bars. In March, police arrested 11 of the reporters covering the protest demonstrations against corruption. In the press freedom Index of “reporters without borders” has ranked Russia at 148 out of 180. Czech Republic is on the 23rd line of the scale.