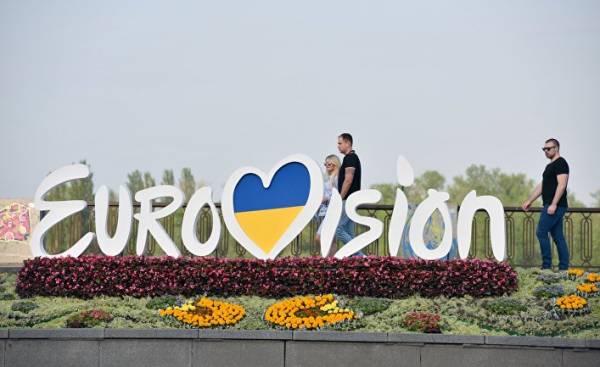 Music Eurovision song contest in Ukraine were marred by war, corruption and a weak economy.

“The Ukrainian leadership is using the music festival, to divert attention,” — says the analyst in the field of political security Hedenskog Jakob (Jakob Hedenskog).

A little over three years ago on independence Square in Central Kiev turned bloody battles. Now this place attracts visitors from all over Europe.

“The music festival is a showcase for Ukraine, which wants to show that she has European values and that the war is far from Kiev. At the same time, of course, security in the city was strengthened to prevent terrorist attacks,” says Jacob Hedenskog from the Institute of total defence, FOI.

According to him, the organization of the event much criticized for superficiality.

“The motto of Celebrate diversity, that is, “Celebrate diversity” seems to be just a facade, while in General in Ukraine, representatives of the LGBT community constantly diskriminerad and persecuted because of their orientation.”

The fact that the three leaders of the competition were men, too, does not indicate diversity.

This competition is a pawn in the political game. Last year Ukraine won with a song about how the Soviet Union expelled the Tatars from the Crimean Peninsula in southern Ukraine in 1944. It was about territory, in March 2014 Russia annexed.

This year Ukraine will not let Russian singer Yulia Samoilova to participate in the contest, as she acted in the Crimea. The European broadcasting Union, this decision was condemned.

“It is obvious that Russia was looking for an excuse not to participate in the competition and to discredit Kiev in the eyes of Western countries. This is part of the Russian hybrid war against Ukraine”, — said Jacob Hedenskog.

At the same time, in the Donbass in Eastern Ukraine the conflict continues, each week claiming the lives on both sides.

In March, Ukraine start the economic blockade of the occupied territories.

“The separatists and Russia have criticized this measure, but for Ukraine it is a question of national prestige. Controls the territory of Russia, that even if it pays for them, according to Kiev,” explains Jakob Hedenskog.

Ukraine blocked water and electricity to the occupied territories. At the same time, she relies on the supply of coal from the Donbass.

According to Jacob Hedenskog, internal policy of Ukraine affected by the conflict in the Donbas and the information war against Russia.

“It absorbs a lot of energy and resources. At the same time, the government and the President Poroshenko using the war as a unifying factor in order to achieve national unity in the face of Russian threats. The President has amassed a lot of power.”

“Some forces and oligarchs are trying to prevent the reforms that are contrary to their interests.”

The level of corruption here above all in Europe. Ukraine and Russia share 131 among 176 countries in the corruption rating, according to the organization Transparency International, which is working against bribery.

Andreas Johnson, however, sees little economic improvement in Ukraine, largely due to the support program of the IMF in size 17.5 billion, ie slightly more than 150 billion crowns, and reform. Currency — the hryvnia — in recent years, quite stable and foreign exchange reserves rebounded slightly.

However, the trust was spoiled a month ago, when the Director of the national Bank Valeria Gontareva reported that resigns.

“Said she was dissatisfied with the work on reforms,” — said Andreas Johnson.