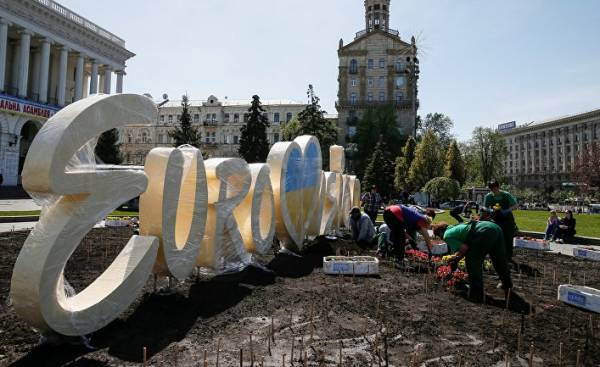 Kiev sparkles and shines when the spring sun reflected in the gilded domes of the churches in the Baroque style. The snow banks begin to melt; the shoulders descend and face softened. The city and its people look updated.

Perhaps the reputation of Kiev is determined by political instability (during the protest of the revolution on the Maidan in winter 2013-2014), but today’s guests are unlikely to see it. Instead, the city offers tourists a taste of bar life, unique and relaxed — at least this week — with a touch of the kitsch of Eurovision.

The number of guests in Ukraine has never been huge (in 2013 there have been 81 thousand Brits), but Kiev deserves better and hopes that Eurovision will again pique your interest, and cheap flights Ryanair from Stansted (starting in October) will attract more British tourists. But that can actually increase the number of visitors is a creative sharpness of the city’s lively experimental art, night life, outsider atmosphere.

Saturday night “Alchemist Bar” at Shota Rustaveli announces a guitar sound-check. We follow the noise to the basement where the man with a beard walks on stage, tuning his guitar. Today is the group The Good, The Bad and The Ugly, they will start with the cover of “Return to Sender”. It’s an ironic beginning, but it will raise the crowd, mostly in vintage clothing. Cheap retro cocktails (3.50 pounds) we are talking about the composition of the new Atlas of the Kiev festival Weekend in June. This year British artists Nothing But Thieves and The Prodigy will be playing with local groups such as The Hardkiss and Pianoboy.

“Kiev is not so often visited by pop stars, so we try to focus on our own artists, such as Dakh Daughters (avant-garde women’s group consisting of seven participants; played for the protesters on the Maidan, will perform at the Atlas Weekend — approx. ed.)”, — says Bogdan, also a musician.

“This is one of the best cities for techno and underground parties,” adds his friend Paul.

The next morning, the bookstore-cafe “harms” in the yard on Vladimirskaya street is crowded with people viewing old records. On the shelves of vintage cameras on the wall — abstract Polaroid photographs. I was talking with a couple at the next table, they Pianoboy fans (real name Dmitry Shurov), local composer and musician.

Later we Surovym ordered tea in his favorite cafe “On Stanislavsky”. It is crowded, Bohemian place with mats on the floor and ironic art on the walls. Shurov says that culture is one of the few areas in Ukraine, which is not experiencing a crisis, and that musicians are more trusted than politicians. “It should not be this painful.”

He also considers Eurovision to be a positive force. “The only thing people know about Ukraine is Chernobyl and war. “Eurovision” — is something good in Ukraine. Cues similar to the European India. He’s mysterious and unpredictable, his power is chaotic. Hidden talents everywhere. We have young people who look beyond, living in a messy place and trying to cope with war and revolution. In spite of all it’s a great city, where people can create.”