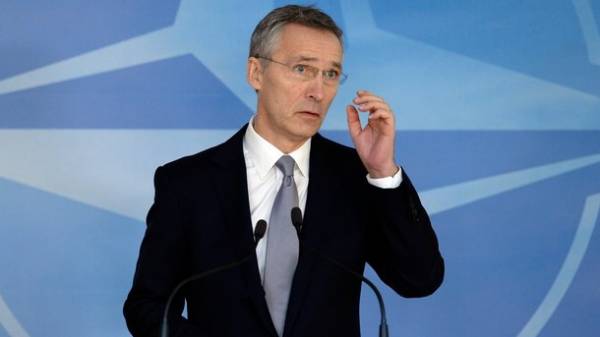 NATO Secretary General Jens Stoltenberg reiterated that Ukraine remains on the agenda of the Alliance. About this Stoltenberg said during a meeting with Deputy Prime Minister for European and Euro-Atlantic integration of Ukraine Ivanna klympush-Tsintsadze, in the framework of her visit to the headquarters of NATO in Brussels.

According to him, the tragic incident that happened in the East of Ukraine with the members of the Special monitoring mission of the OSCE, showed a deterioration of the security situation in the Donbas.

In this context, the allies once again urged Russia to meet its commitments under the Minsk agreements. They also reaffirmed their continued support for the sovereignty and territorial integrity of Ukraine within its internationally recognized borders.

The Vice Prime Minister took part in the meeting of the Commission Ukraine-NATO, during which they talked about the main priorities of the Annual national program of Ukraine’s cooperation with NATO to the year 2107.

“Ukraine in strengthening the defense of the state, bring the army into compliance with NATO standards, but we all know that, in addition to technical and administrative standards, there is also “home” NATO standard, which must be implemented by the Ukrainians – is the change of consciousness,” – said Deputy Prime Minister.

Klympush-Tsintsadze stressed that the current program has been designed by allies and active involvement of civil society. Separately, she has shared his expectations of the Ukrainian side are planned for may 25 meeting of the heads of state and government of countries-members of NATO.

During a meeting of the Commission Ukraine-NATO allies confirmed that during the current year will be the visit to Ukraine by the North Atlantic Council.