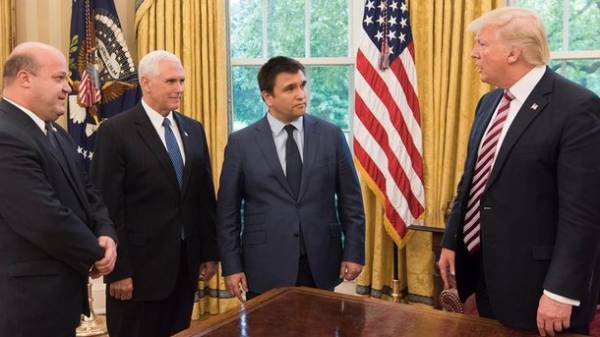 The US President Donald trump once after talks with Russian foreign Minister Sergei Lavrov met with Ukrainian foreign Minister Pavlo Klimkin, to exclude the interpretation of the negotiations as a victory of Russian diplomacy. Comments about this “Today” said the scientific Director of the Institute for Euro-Atlantic cooperation Oleksandr Sushko.

“This, of course, for diplomatic balance. And in order to make it impossible to supply this situation as a victory of Russian diplomacy. If he had only met with Lavrov, it would be a tremendous propaganda effect for the Russian media and some unclear situation for the domestic American audience, which is constantly “touches” trump for his real or imaginary ties with Russia and his attitude towards Russia. Therefore, in order to balance out almost simultaneously he had a meeting with a Ukrainian delegation,” – said the expert.

According to Sushko, trump sees Ukraine in its dialogue with Russia, although it is clear that Russia for him is objectively a big role. “He’s long stated intention to seek common ground with Russia, in particular in the fight against the Islamic state. But even in these conditions, leading the dialogue with Russia, he is forced to respond to risks that entail in the unbalanced format of dialogue with Russia. Although it is unknown how planned was this meeting (with Pavlo Klimkin. – Ed.) how spontaneous. However, I made the right diplomatic move. On the other hand, it is possible that at this meeting, were placed certain emphasis to the areas of responsibility of senior American officials, including, possibly, a Vice-President of Pence, that a degree of patronage in the relations between Kiev and Washington,” – said Sushko.

With regard to possible US involvement in the “Normandy format” negotiations on the Donbass, what Klimkin said during a visit to Washington, according to Oleksandr Sushko, we are talking more about indirect participation of the States. “The issue is being discussed. In this case, it is obvious that, on the one hand, the Administration trump wants to put more responsibility on the European partners for the situation in the Donbas and the Ukrainian-Russian conflict. And they have repeatedly stated about it. But, on the other hand, they do not want to be out of the game in the process. I don’t think talking about the direct inclusion in the “channel format”. I think that the US will be looking for specific your format. They haven’t happened all appointments (not a successor is appointed Victoria Nuland, assistant Secretary of state for Europe and Eurasia – Ed.). Perhaps this meeting (klimkina with trump and the Penny – Ed.) opened the Ukrainian side the answer to the question of who will lead the Ukrainian portfolio in the state Department and the new Administration,” concluded the scientific Director of the Institute for Euro-Atlantic cooperation.

Prior to that, Pavlo Klimkin met with Vice-President of the United States, Mike Pence, who, after negotiations, wrote in his Twitter on unshakable support for the sovereignty and territorial integrity of Ukraine.