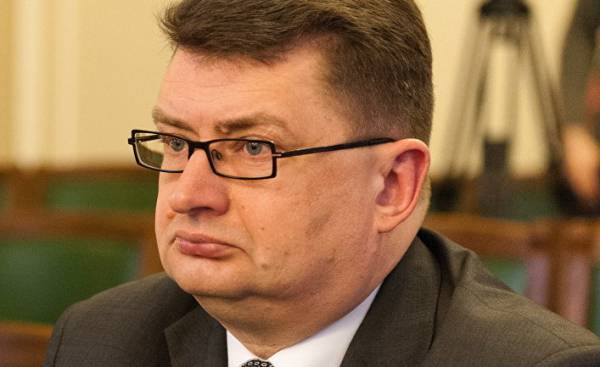 The most important person in Latvia, which must protect the very basis of the state Constitution and all state secrets and who is responsible for security in this country, — the chief of the Bureau for the protection of the Constitution (BZK, counterintelligence service of Latvia) Janis Maizitis robbed!

Here is a misadventure.

Previously the criminal attack suffered by the predecessor Maizitis Janis kazocins, who was beaten. But it’s probably a case of a different kind.

The theft of the Maizitis first thing that comes to mind is all sorts of conspiracy theories: it is unlikely that a simple theft, it’s possible the thieves were looking for any state secrets to then run information, is directed against the Latvian state or one of its transatlantic partners. Perhaps, looking for something to blackmail Maizitis, something from his private life? The official police version, which I tend to agree and the victim himself, is that now there is no evidence that the theft connected with the work of Maizitis, this can be the most common theft, which in the Latvian covered enough. The homeless, discovering the open window, climb in and take the computer to sell it for a few euros to some middleman.

But there is still the question immediately arises. What is this rented apartment, in which such criminal area, where it can easily enter random thieves and Stoke in there? Housing such senior and important officials such as former attorney General and current head of the AFC, must meet certain standards. Needs to be checked, not installed there any listening devices.

Needless to say that the apartments of these persons must be equipped with alarm system, doors and Windows that cannot be opened by break-in tools. How could it happen that the apartment itself Maizitis was able to get a common thief? Well, not getting all of this. It turns out, Maizitis, like a fiend, which makes for a other classy boots, and he walks barefoot.

We heard about officers who have lost their access to state secrets precisely because they have lost their mobile phones. In memory of the mobile phone easily find all the contacts officials, including, perhaps, agents. To lose your “gadget” dangerous, serious, and over that you shouldn’t laugh.

But the tolerances to the state secret issues and selects the UPC is the same Maizitis. If Maizitis can’t keep your apartment, will he be able to protect state secrets?

Maizitis claims that the stolen computer there is nothing that is secret information. That is classified information, may be no, but does he Maizitis, at which point he contacted the relatives, to some colleagues? Let’s hope that Maizitis did not take work home and viewed on your computer, only pictures of cats in social networks.

Nevertheless, there are Parallels with the tumultuous events overseas. Is Hillary Clinton lost voters just because they did not know how to properly knock on your computer and not to confuse their personal files with the correspondence of national importance. This got a big Park, in a rather awkward situation turned out to be the chief of the Federal Bureau of investigation, James Comey, who shortly before the elections gave information that initiated the investigation with the reckless actions of Hillary in a virtual environment. However, it did not save the Komi broom new President of Donald trump. Trump his recently fired for that negligence Clinton was investigated too toothless. Ah! Where is the independence of the judiciary and other fundamental obligations, which the Americans instruct everyone else in the world?

By stealing the Maizitis can be different versions. First: simple thieves robbed the former attorney General. Second: we worked some hybrid monster of the Kremlin, who want to hide such a need for all the contents of “bags of KGB”. “Bags Cheka” in recent years it has been very relevant, and perhaps there is something to hide.

It may be true that US intelligence agencies such figures as Maizitis, have become obsolete. It is no secret that Maizitis in his former career to be almost a symbol and an example of servility. When he was attorney General he was wearing daddy at the U.S. Embassy to report what criminal case was filed against the owners of the local aboriginal people-Latvians, who had some kind of civil conflict with major U.S. firms. Perhaps Maizitis, overzealous?

Under the new administration of Donald trump, perhaps this Maizitis more unwanted, because too many had served the predecessors of the current President of the United States, their clicks and funds? In this case, Maizitis is no longer needed and head BZK instead will be assigned to something else.

No need to think that Latvia is for Americans something little and they don’t even know where it is. They are interested in everything. Look at the U.S. Embassy in Riga boarding school, opposite the shopping center Spice! Such solid construction. Our little Maizitis, maybe against his will, embroiled in the great game, in which one the Americans beat in the face of other Americans?

Whoever was the one who wanted to discredit Maizitis, the last careless attitude to the safety of their computer and flats is not an embodiment of the image of safe and reliable character.

The consequences of stupidity trump Jr.