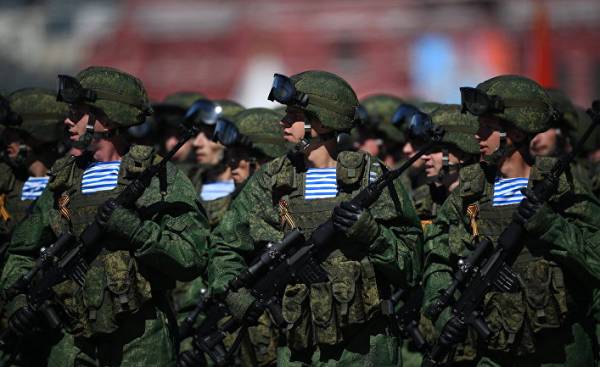 The annexation of the Crimea only slow down his de-Sovietization, but not abolished. Sooner or later the opposition will understand that the Victory Day is not “can you repeat that” and “never again”.

There are two ways to remove the war. First — with flying colors, loud speeches and refined heroism. Second — with dirt, blood and distilled without pathos. The ability of a society to honestly talk about myself depends on whether it can apply the second method of describing their own history.

As an example can take any Russian film about the events of the Second world war. Regardless of the year it will be a classic epic: the story of the battle of absolute light with no less than absolute darkness. In the role of the semitones can only serve the individual characters. For example, some German will be a sympathetic attitude to the Russian and became frondeurs own command. Or Vice versa — quite a domestic collaborator will run to a Wehrmacht officers to change their homeland for increased rations.

Feature that we’ve watched such films, that not even imagine that the world can be to remove otherwise. Although, actually, it is even possible.

For example, the American movie “Fury” about a tank crew fighting in Europe somewhere at the end of the war. Clean the dirt on the boots, uniforms, private life and morals. Here American soldiers takes away from the peaceful Germans products for your squad. But grimy tanker drags German widow in the back comfort. But experienced commander makes a rookie himself to shoot the German prisoner in order to force the youngster to get rid of illusions that the war can go unspotted.

In the Russian centralize to imagine such a movie is impossible. A splint on the model of “pearl Harbor” is possible — and regularly released. But the film shows the war through the oskotinivanie people, is possible except for strips about Afghanistan or Chechnya. Because the history of the main wars of the twentieth century for a Russian citizen is not in the plane of historical knowledge, but the logic of a religious cult. Even the Second world carefully distilled to the great Patriotic war, to throw all of it cheesy moments, like the partition of Poland. This is a real civil religion with its Pantheon of saints, martyrs, apostles, and the canonical interpretation of events. Any deviation from Canon is considered heresy and punishable by the Inquisition.

The only problem is that time inexorably. Any war dies when the last soldier is buried. And then the memory of the war can be maintained except on a ventilator, and then the viability of the myth is very conditional.

And all because one of the main qualities of human memory is the ability to forget. The memory is not to prolong life artificially — and will not be able to erase something from the memory ahead of time. But the farther away from us historical epoch — the faster its monuments move into the category of architectural details, losing its absolute sacredness. Because the past is alive exactly as long as his contemporaries.

For example, for the generation of grandmothers and grandfathers Civil war had a sacral sound — on whose side would be in that fight nor was their sympathy. And today, it has become synonymous with fratricidal slaughter, losing the aura of the battle of light with darkness. Because it took a generation, and the conversation about the era is conducted without fear of hurting someone’s feelings.

This does not mean that the world will follow the same path automatically — at least because for the vast majority in the war remains a clear understanding of “us” and “them”. But her legacy is bound to morph over time of the absolute heroism of the older generation in the impersonal conditional heroism of the era.

Personal experience will gradually give way to the official feast, and collective prayers. Grow a generation that grandparents are not on holidays show tunic with awards. And even a parade on may 9 will be perceived as a major review of troops and equipment, and not as a citation of historical events of the last century.

And sooner or later will change the language of discussion and style of discussion. Yes, the state order and formed their ideology will dominate as the relevant expenditure items in the budget — but the stirrings of a new understanding will sprout. And at some point we will find that the language of the description of military life can become in tune with all of the same Hollywood “Rage” about the fate of an American tank crew. In which epic will share space with the dirt of everyday life. And balance one and the other in the equation will also change.

And all of the themes that are today in the Crimean public discourse is even impossible to imagine, begin to contributes. Events between September of ’39 and June’ 41 — to reflect. The daily fabric of military life — to give away. White spots in the history of the world — to emerge. The figure of silence is doomed to go back in time and stop this process every year will be harder — just because you attempt to beat the time doomed to failure.

Because now you can still try to build on the past. But the past cannot build the future. Especially if it’s past emasculated and not subject to reflections.