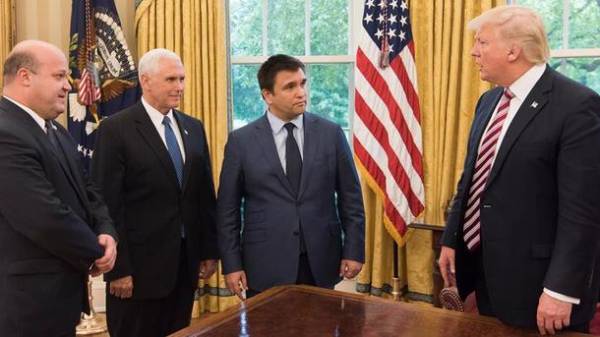 The meeting of U.S. President Donald trump with the head of the Ukrainian foreign Ministry Pavel Klimkin, an important demonstration of the fact that without Ukraine will not be resolved, the issues that concern it. About this, commenting on the results of the meeting, trump and Klimkin, said the head of the parliamentary Committee on foreign Affairs Anna hopko.

“Before Tillerson’s visit to Moscow was a telephone conversation with Poroshenko, after the visit was also a telephone conversation. It is extremely important that in our bilateral relations followed the principles of respect for our national interests, sovereignty and territorial integrity. And to all the meetings where Russia is trying to show that they are trying to solve our problems without us, with a new US Administration, this option was no-go. In matters which concern the territorial integrity and sovereignty of Ukraine, the us administration once again confirmed that they will take a principled position,” – said Anna hopko.

As for the possibility of U.S. accession to the “Normandy format” negotiations on the Donbass, as mentioned Pavlo Klimkin, according to Hanna hopko yet that is hampered by the electoral campaign in France and Germany. “In the “channel format” there are issues such as the elections that have just ended in France, ahead of Germany, plus, we see that the new Administration trump finalizes its strategy towards Russia, so while we are in a period of uncertainty. Western policy and a specific strategy for the peaceful settlement of the situation in the East of Ukraine is studied. I think at the G7 summit, this issue will also be discussed. Plus in a new Administration, people who have already started to work, and that will take office will be to study the Ukrainian situation will be more acquainted with that file, to have a plan a, plan B and a clear strategy that focuses on results and concrete progress. I think we will see the position of the Macron and his new Administration, and after that, perhaps some activation of the “channel four”, – said the head of the parliamentary Committee.

Plus Russia is unlikely to be interested in the extension of the “channel format” in accession to strong partners with a principled position. “I think all attempts to expand the Normandy format, involving the United States, Britain as guarantors of the Budapest Memorandum, will encounter resistance from Russia. But it is important to find new mechanisms and instruments of pressure to the price that the aggressor pay was increased, then it would be incentive for Russia to real concessions and fulfillment of the Minsk agreements. Especially their first components: ceasefire, withdrawal of troops, release of prisoners, access of international missions. And the next month or two will be the time of finalization of this strategy”, – summed up Anna hopko.

The meeting was also attended by Vice-President Mike Pence, who, after negotiations, wrote in his Twitter on unshakable support for the sovereignty and territorial integrity of Ukraine.

“We received clear assurances of the support of the American party to the sovereignty and territorial integrity of Ukraine within its internationally recognized borders. Discussed in detail the situation in the Donbas, execution of Minsk agreements. We are very grateful to American side for unwavering stance in support of Ukraine. What took place on those visits, is a great success of Ukrainian diplomacy. We were once again convinced that we have a clear support and understanding from the American side, what is aggression and how it is threatening”, – commented on the results of the visit of the speaker of the Ministry of internal Affairs in Donetsk region. 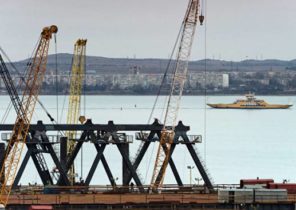