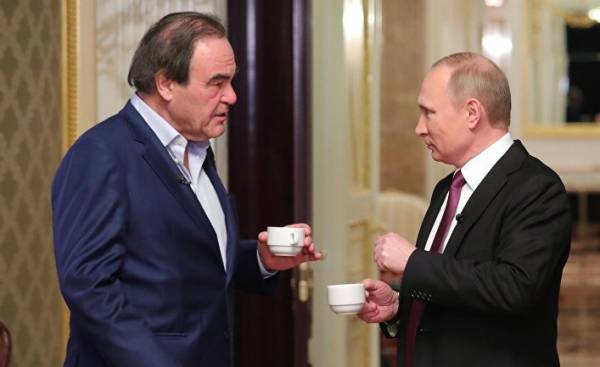 “Sometimes you can backtrack, but only when the path to victory,” — said in a moment of candor surging Vladimir Putin, conversing with an American Director Oliver stone. Thursday 4-a serial film “Putin” will be shown on TV channel Prima Zoom.

Most likely, no one expected that he would recognize from the film “Putin” something new. It is unlikely that out of the mouth of the protagonist, i.e. the President of the Russian Federation Vladimir Putin, will hear some unexpected truth about himself. In General, the Director Oliver stone did not put any research purposes. However, despite all of the skepticism that preceded the interview-series, something in it was really unexpected: the movie was boring. With the pump advertised 4-serial ribbon extremely snug and uninteresting. Sleep quietly right after the opening credits.

The world through the eyes of Putin

Monday after the American audience (the series premiere took place on an entertainment channel Showtime) to admire their leader for the Russians. Czech viewers will also have the opportunity. TV channel Prima Zoom does not lag behind the Russian colleagues and for four evenings will be showcasing a film called “the world through the eyes of Putin.” Not that such a controversial topic, as the Russian President should not be covered on television, but four nights in a row to look at Putin’s face smoothed out and listen to the waterfall, strange stone claims able, perhaps, only the President of the fan club, “I like Kremlin”.

In total the film was shot intermittently over 20 hours. And it’s amazing that in all this time, stone never managed to pull out of Putin anything he said before that it would not be commonplace or obvious lie. But the shooting took place, perhaps the most turbulent period of Putin’s rule: 2015 to February 2017. However, the creators of the film, which, probably correctly, did not want to focus on the immediate situation, sanctions, occupation of Crimea and the war in Syria. The authors approached the subject from a distance, beginning with childhood and adolescence.

About this period of his life, Putin wrote to several journalists. And then there was the opportunity to extract something from the main protagonist. Instead, stone, who sometimes disgusting fawned, asking questions in this style: “You were uncontrollable child, but everything changed judo, which you began to engage in 12 years, isn’t it?” And Putin answered that skillful feeding: “You’re very well formulated”. In another episode, Putin argues with the Director about whether Mr Putin is ready for the highest post. “I was not ready yet,” he explains stone. “There was,” — objects and he begins to extol the experience of Putin.

When the turn comes to the troubled 90 years (when Putin worked in the St. Petersburg city hall), the optimists would expect the question of huge financial fraud that are investigated even a special parliamentary Commission. But this question has not sounded. Instead, the stone begins to list the merits of Putin, saying that you raised salaries and brought respect for the elderly, you have overcome poverty, ended the war in Chechnya have once again brought Russia into the international arena… Putin assents and sometimes modestly remarks: “Yes, it is.” He did not even once — even when the Director says: “a True son of Russia.”

The film, shot in a very UN-American style

The film is shot in a very UN-American style, and sometimes Putin has even to subdue raspasovschika stone. But one day he misses no opportunity to say that the Russian economy could serve as an example for us. However, the fact that the Russian GDP is slightly more than half of the GDP of the state of California, he is silent. In the film there is a seemingly humorous moments, often with a “macho” connotation. For example, such. “Do you have bad days?” asks stone. “I’m not a woman, and the bad days I do not get”, — playfully meets Putin. He did not seem rough, stone intersperses interview footage, which Putin feeds a horse or walking in the garden the sound of music. “I believed him”, says the Director, enjoys the reputation of a political provocateur, who made movies more enthusiastic about these left-wing dictators like Cuba Fidel Castro and Venezuelan President Hugo Chavez. The problem of the film about Putin is that after viewing the stone, most likely, will remain alone in his confidence in the Russian leader.