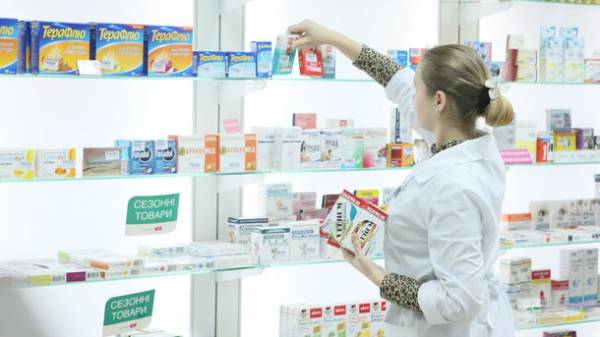 Pharmacists frighten Ukrainians impending shortage of medicines. From 1 April from the sale, allegedly, can disappear a lot of drugs. Among the reasons pharmacists is called the system of state regulation of prices, designed to ensure the availability of medicines for the population, writes UBR.

Experts believe that the most effective original medications can disappear from sale. They start to fiddle and at exorbitant prices, says the President of Fund of assistance to children with cancer Valentina Markevich.

“After 1 April blossom black market drugs, which the government introduced price regulation. The drugs will be imported and to be sold through online pharmacies, international organizations. For example, endangered salbutamol for the treatment of bronchial asthma, which is 90% more expensive than the reference price on medicine with similar active substance”, — believes Markevich.

As explained by the Executive Secretary of the National medical chamber of Ukraine Serhiy Kravchenko, reference prices for medicines are set by averaging the cost on the basis of data on prices of similar drugs in a specific release form (tablets, ampoules, etc.) and dosage. The data are analyzed for several selected countries located in the neighbourhood with Ukraine (Poland, Slovakia, Slovenia, Czech Republic, Latvia, Hungary).

“Data can be taken as the original patented medicines and their cheaper copies, so-called generics,” — says Kravchenko.

Market operators and experts are sounding the alarm, believing that the producers of expensive original drugs will not agree to lower prices under the dictation of the officials and will not be able to supply its products to Ukraine. In particular, we are talking about drugs budesonide, salbutamol, Metformin, gliclazide, amlodipine, bisoprolol, spironolactone.

In the Ministry of health causes for a possible shortage in the pharmacies do not see.

“The reason that drugs have gone there. Our project “Affordable drugs” will begin work the first of April, allocated 500 million UAH”, — said earlier the Deputy Minister of health Roman Ilyk.

Consequently, according to Markevich, conventionally medicines can be divided into three groups. First — the drugs, the cost of which is placed in the reference price. The second group of drugs whose price fits within the maximum margins of 35%. The third group — those that do not fit anywhere and therefore cannot be sold in Ukraine.

“Preparations with a premium of up to 35% (relative to reference prices) will remain on sale. Everything will cost more, following the logic of the government, must disappear. Residues of these drugs should pharmacies sell until April, and then — it is not known how these drugs can be sold in Ukraine. They will be formally banned,” says Markevich.

In addition, according to her, it is not always possible to accurately determine the reference price of drugs.

As you know, the Ministry of health on 23 January 2017, by Executive order No. 53 approved the registry of marginal wholesale prices for 21 international nonproprietary name of the drug, the cost of which will be offset by the Ukrainians from the budget (reimbursement). We are talking about drugs for the treatment of three groups of diseases: cardiovascular (hypertension), asthma, and diabetes II type.

Regulation of prices and reimbursement of their cost from the budget approved by the Cabinet in November last year (№862 and # 863). State regulation of prices was started from 1 January 2017, but then it and the reimbursement of the cost of medicines was postponed to 1 April. The government regulates the cost of drugs, fixing their maximum price by abstracting (selecting the lowest cost drug in the selected countries).