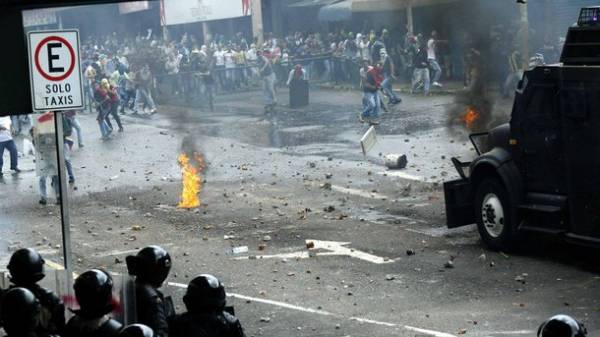 Another person died in clashes of the opposition with police in the Venezuelan capital Caracas. In addition, at least 93 people were injured.

It is also reported that one person injured in demonstrations on 8 may, the day before he died from his injuries.

From the beginning of April in Venezuela are large-scale street protests against the Executive. Non-governmental organization “Centre of monitoring of social conflict” (OVCS) counted 946 such performances, during which 45 people were killed. The General Prosecutor’s office acknowledged the death of 38 people.

According to the latest data, during this time, only in the capital, more than 750 people were injured. In addition, the police detained more than 1.3 million speakers on the side of the opposition. Another 250 civilians have been presented before military tribunals.

Earlier, the President of the country Nicolas Maduro announced plans to amend the country’s Constitution and thereby to resolve the crisis in Venezuela, but the opposition refused to take part in this process and called it illegal.

Demonstrators demanding early elections of a new President, the full restoration of the rights of the Parliament of Venezuela, and begin the process of rebuilding the economy.

In addition, the Venezuelan opposition blames the country’s President Maduro in disregard of the law, the detention of political opponents and pressure on the judiciary, as well as the economic problems of the country.