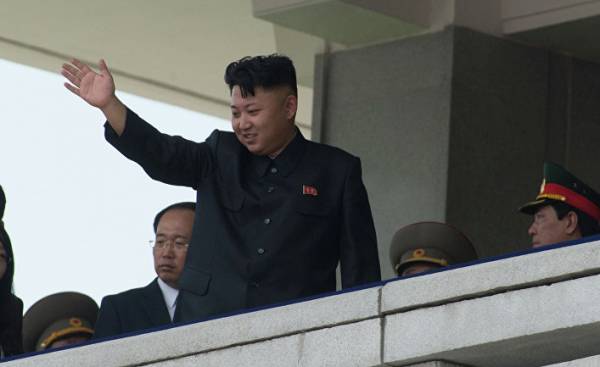 Amid rising military tensions on the Korean Peninsula Russia’s actions attract more attention. While President Putin does not make outright statements, but I wonder what are his true intentions?

With regard to the situation on the Korean Peninsula, Russia officially takes the following position: “we Need a peaceful settlement through diplomatic efforts.” More specifically, the Kremlin’s calls to resume the six-party talks, which broke down in 2008.

April 27, during a joint press conference with Prime Minister of Japan Shinzo Abe, President Putin said: “we Should calmly continue to engage in dialogue, without falling into rhetoric. It is necessary to resume the six-party talks”. China also supports this position.

The President of the United States trump demanded that China suspended oil supplies to North Korea. If Beijing will not do it, the US is ready to impose sanctions against Chinese companies and financial agencies who work with DPRK. The strategy is to put pressure on China and to monitor his reaction.

As for the DPRK, if China really will stop supply of oil, it will not be before the war: the country is in a deep economic crisis.

Against this background, a remarkable event took place. North Korean media reported on the rapprochement between Russia and the DPRK.

On 30 April, the head of the American Department of the foreign Ministry of Korea met in Pyongyang with the Russian Ambassador. According to NHK, the representative of Korea said: “We will strengthen the nuclear capability to protect the country from the American threat.” In turn, the Russian side expressed understanding on this issue.

No more details unknown. However, I think the situation is as follows: the DPRK has some feelers out on the subject of Russian aid if China stops or reduces the supply of oil.

In other words, the probability that North Korea discussed with Russia, will she be able to supply oil in case of an emergency.

Oil life depends on the DPRK. If China will block the channel and will not appear other suppliers, the DPRK will not be before the war. At issue will be the very existence of the regime of Kim Jong-UN. The world knows about it. Of course, Russia too.

From the point of view of Russia’s rapprochement with North Korea increases Russian prestige.

The fact that if China would not supply oil, the fate of North Korea will be in the hands of Russia. In other words, Russia will seize the initiative. As President Putin suggests such a development, perhaps that is why he continues to silently observe.

The only thing converge the interests of Russia, USA and China

Russia is already sending signals to North Korea. In may, the Russian transport company has opened regular ferry between Vladivostok and the Korea Rason. This route will run “Manganon”, which previously went to Japan. The port of Rajin in the Rason with the Russian money.

According to a source in the Russian government, the establishment of a regular ferry there is no political motive, however, it is strange to believe that there is no political sense at a time when the DPRK has fallen on hard times. At least North Korea has to take it so: Russia is ready to help her.

The first ferry flight had to make may 4, but due to the unpreparedness of the North Korean side, this date has shifted by two weeks. It is absolutely natural to suppose that before the opening of regular flights Russia expressed willingness to supply crude oil.

However, despite all this, Russia will not fully support the DPRK. The fact that the North Korean nuclear and missile development pose a hidden threat to Russia.

In other words, Pyongyang has been in arrears in Moscow due to the oil supply, but from the point of view of deprivation, Kim Jong-UN missiles and nuclear weapons from Russia, USA and China common interests. How will act the President Putin amid U.S.-China standoff?

2 may trump the President held telephone talks with President Putin. The main topic was the exchange of views on the situation in Syria, however, the leaders of Russia and USA also discussed the North Korean problem. Bi-bi-si has informed that the sides exchanged views on how best to address the dangerous situation.

1 may trump the President also called Prime Minister Abe. The content of this conversation is unknown. This is extremely unusual.

Since April 27, Prime Minister Abe met in Moscow with President Putin, I have no doubt that the heads of Japan and the United States discussed Russia’s intentions in the DPRK issue. After that, trump called Putin.

Somehow those phone calls suggests that the key to the situation in North Korea is in the hands of Russia. President Putin’s determination and cunning, not possessed by the President of the PRC XI Jinping.

This is perfectly demonstrated aggression in Crimea in 2014.

President trump uses weak si, at its discretion, however, even if China will suspend oil supplies, then have to deal with a problematic President Putin. In this situation, you can count on Prime Minister Abe. It plays a very significant role.

In my last article I expressed the view that the confrontation between the US and the DPRK will be protracted. Given Chinese and Russian factors in the crisis of the Korean Peninsula will not be resolved in the near future.