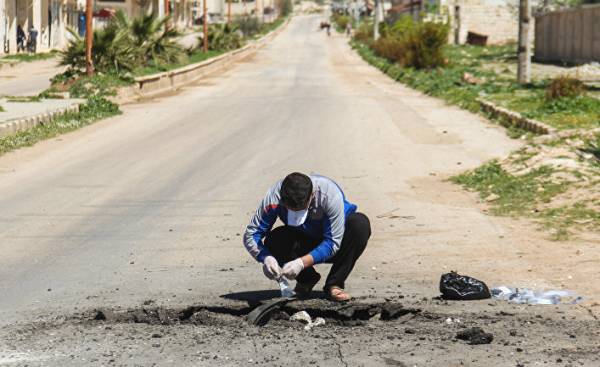 In 2003, the United States launched a war against Baghdad, formed against the backdrop of inaction of the UN’s own coalition. The pretext for the invasion of Iraq was that Saddam Hussein possessed weapons of mass destruction and could threaten the security of the region and its inhabitants.

After several years of war that destroyed the Iraqi state, the aforementioned weapon was never found. All that proved this war is the fact that the real weapon is religious extremism and ethnic conflicts, which took full advantage of Iran.

Today in Syria we have seen how in one form or another, history repeats itself. Last American administration promised to launch a military campaign against the regime of Bashar al-Assad if he used chemical weapons against his own people. Then the Obama administration fulfilled its promise, but a little different. Thus, the United States has dispatched several of its warships, once again increased the number of land and air forces in the region, but all over.

Since coming to power in the United States Donald trump and a change of administration, Washington’s position on the Syrian crisis has changed a bit. In particular, the Americans attacked one of the bases of the Syrian regime, but this time it ended with rhetoric and promises. Now the Syrian people are waiting for, when the regime once again used chemical weapons. How long Syrians will kill with impunity while the international community will take any step to save them? How long a criminal will brag about the fact that it protects Russia, like all the dead in Syria since the beginning of the revolution — nothing more than useless numbers that can only be remembered.

Thus, the least now the Syrian people want to hear promises, assurances that the military operation against the regime does start. After so many years of war, which they survived without being guilty of anything, they can only claim rights to dignity and freedom, rights that they curse day and night.

The Syrians want only the performances of several of their demands, they want an honest solution and not traded. They do not want to overthrow the regime only to the country embraced chaos and Syria fell into the hands of the leaders of sectarian strife, just as it happened with Iraq, which is now ruled by mullahs from Qom and Tehran. They not only want the destruction of chemical weapons in the hands of the regime, but also a serious, fair investigation that would have revealed how the chemical weapons were in Syria, even if the buyer was not the regime, but someone else.