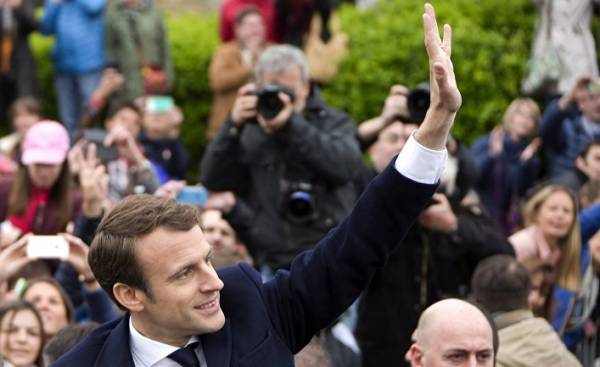 The effect of the Emmanuel Macron in French politics can be compared with the earthquake.

A year ago, he was a member of the government in one of the most unpopular presidents in the history of the country.

And today, at just 39 years old, he won the presidential election in the fight against systemic candidates on both the right and left, and now with the extreme right.

Without a doubt, partly to Emmanuel Macron was just luck.

The initial leader of the race, right centrist, Fillon, lost points because of the scandal, and the socialist candidate, Benoit Hamon, the representative of the radical wing of the party, were not in demand in conditions when the majority of voters clearly wanted something else.

“Macron is very lucky, he found himself in an unexpected situation,” says Marc-Olivier Padis from the Paris of the analytical center of Terra Nova.

He was a visionary

But lucky to explain the success of Macron difficult.

He had the opportunity to fight for the nomination from the socialists. But he understood that the socialists several years was in power, the people are tired of them, the party lost popularity and her back will be extremely difficult.

“He was able to anticipate that he will have a chance when no one else it could not foresee,” — said Padis.

Macron looked at the political movements that emerged in other countries of Europe, such as Podemos in Spain or “Five stars” in Italy and saw that a similar non-systemic political force in France, no.

In April 2016 he founded his movement En Marche! (“Forward”), declaring the intention to Express the aspirations of the masses. After another four months macron left government of françois Hollande.

The movement Rules were built on the same principle as the campaign of Barack Obama in the 2008 election, says the Paris journalist Emily Shultheis. His first action was the “Big marsh” to mobilize inexperienced, but enthusiastic activists.

“His staff used the algorithms developed political technology firm with which they worked — the same firm, by the way, on a voluntary basis participated in the Obama campaign in 2008. They have identified districts and regions, which reflected the social structure of France. Then they sent their people to around 300 thousand addresses in these places,” says Soltas.

The volunteers of the Macron is not just handing out leaflets. They spent 25 thousand in-depth interviews with voters across the country, each lasting about 15 minutes. Interview results are brought in a database, which was used to determine priorities for agitation.

“It was a giant focus group, which allowed Him to measure the mood of the country. In addition, the people established contact with his movement early on, the volunteers acquired the experience of house-to-house to campaign. This experience came in handy for them this year,” explains Sultas.

Political image of the Macron seems full of contradictions.

On the one hand he’s supposed to be “novice” in politics, on the other hand, is a protégé of President Hollande and for several years was a Minister; on the one hand, he’s an investment banker, on the other — the leader of a grassroots protest movement; he calls himself a centrist and at the same time puts forward a radical program of reduction of the public sector.

All this gave his opponent on the second round of marine Le Pen a lot of arguments to expose the Macron protege of unpopular political elite, and not “newbie”, which he himself represented.

However, opponents have not managed to stick to Rules the label of a new Hollande. He managed to preserve the image that attracts those who are hungry for something new.

“France is dominated by the pessimistic mood — in some cases even too pessimistic — and it came with a very upbeat and positive message”, says Marc-Olivier Padis.

“He is young, full of energy and explains, not what he will do for France, and what opportunities will appear in people. And he’s the only one with this message,” adds Padis.

And of course, he’s not marine Le Pen

On the optimistic background of Macron message of marine Le Pen was seen as negative, against immigration, against the EU, against the system.

Rallies in support of Macron took place on a brightly lit stadiums, to the accompaniment of pop music. Rallies for Le Pen, though numerous, were gathered protesting with bottles and flares. Strengthening of the police, the rostrum dark, aggressive atmosphere.

Televised debates between the candidates may 3, was furious. Both opponents unleashed on one another streams of insults.

He blamed her that she has created an atmosphere of fear that it is a political charlatan and is not far from his father an extremist. She called him a puppet of the socialists, a dangerous weapon the world financial community and an obedient executor of all the wishes of Angela Merkel.

Many viewers looked at it and thought: after all, the country may Wake up with a new right-wing President, supporting the destabilization and do not wish to rule in the interests of the French. And the only one who can stop this President, here he is, his name is Emmanuel macron.

Marine Le Pen quite effectively campaigned, but her ranking is slowly but surely slid down. In the last year its rating has reached 30%, and that for two weeks she twice lost to the Makron.

Klimkin revealed that will discuss Poroshenko and Merkel