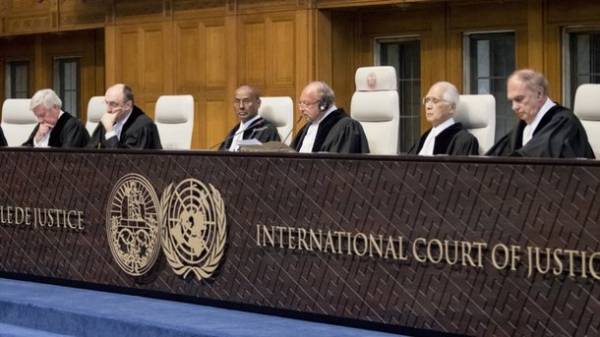 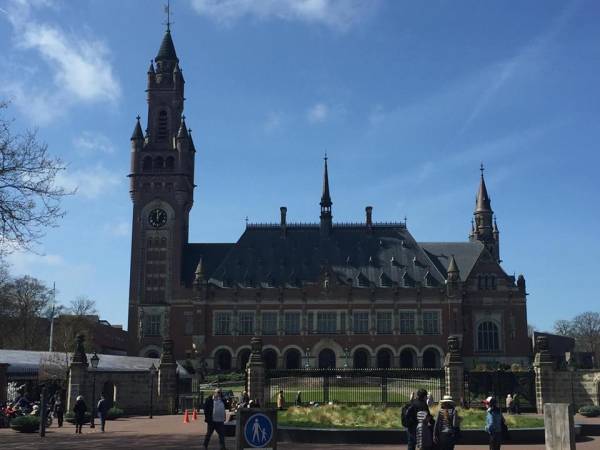 The international court of justice in the Hague. Photo by the author

The results of the intermediate solution. A lawsuit against Russia in international court of justice Ukraine filed January 16, 2017. The goal of treatment is to attract Russia to account for the financing of terrorism in Eastern Ukraine, and discrimination against ethnic Ukrainians and Crimean Tatars in the annexed Crimea.

On April 19, the international court of justice issued an interim decision in the case of “Ukraine against Russia.” First, the court found a prima facie jurisdiction to review the claim. This is a small “victory” of Ukraine. For example, in 2011 the court rejected Georgia’s claim against Russia, saying that the subject of the proceedings does not fall under its jurisdiction. Tbilisi has accused the Russian authorities and separatist groups in Abkhazia and South Ossetia, which was supported by Russia, in a mass ethnic cleansing that took place, according to the Georgian authorities, for many years.

Second, the UN international court ordered Russia to resume the activities of the Mejlis of the Crimean Tatar people, to provide education in the Ukrainian language, and also ordered both parties to the dispute to avoid violations of the Convention on the elimination of all forms of racial discrimination.

Recall that on 29 September 2016, the Supreme court finally banned the activities of the Majlis as an extremist organization. Not long ago, The Guardian wrote that since the annexation of Crimea many activists and ethnic Tatars held in outdated psychiatric institutions. According to the Chairman of the UN monitoring mission on human rights Fiona Fraser, in Crimean prisons continue to torture prisoners. The Chairman of the Majlis Refat Chubarov said that 18 Crimean Tatars in the Crimea was missing, 4 were found dead. And in March of this year Severo-the Caucasian district military court sentenced Russian Crimean Tatar Ruslan Zeitullaev to 12 years of imprisonment for creating in the Crimea of the cell is banned in Russia organization “Hizb ut-Tahrir”. In Ukraine, the organization is not prohibited.

Third, the court obliged Ukraine and Russia to comply with Minsk agreements. The UN security Council, according to the court, urged Ukraine and Russia to develop a set of measures to implement the Minsk agreements. “The parties must do everything necessary to complete this package of documents to resolve the conflict in the Eastern regions of Ukraine in a peaceful way”, – announced the decision of the President of the court, Ronnie Abraham.

And, fourthly, the international court of justice refused to Ukraine in temporary measures against Russia under the Convention on the prohibition of the financing of terrorism. The court found insufficient evidence of Ukraine. “Ukraine has not met the standards of evidence to prove the intentional transfer of funds (Finance – Ed.) for the subjects of “DNR”/”LNR”, – said Ronnie Abraham.

How to make Russia comply with the court’s decision? Petro Poroshenko called an interim decision of the International court promising, as to both claims, the court recognized its jurisdiction. The undisputed “Peremoga” Ukraine can be considered and the decision of the court in the Hague, obliging Russia to stop persecuting the Crimean Tatars, to resume the work of Parliament and to ensure the availability of education in the Ukrainian language. But to force Russia to comply with the interim decision of the court, not to mention the final, it will be extremely difficult, if not to say impossible. For example, in 1986 the international court of justice recognized by the U.S. guilty of violating international law and promoting terrorism in Nicaragua. Nicaragua failed to prove that the United States after the fall of the dictatorship of Anastasio Somoza supported the anti-government group the Contras. But the United States refused to implement the verdict of the International court of justice.

“The International court of justice, if the state refuses to comply with the decision, according to the Charter, the opportunity to appeal to the UN security Council with a demand to ensure the implementation of this decision. But Russia has veto power in the security Council”

“Russia is likely to refuse to comply with the provisions of the decision that will record any obligations of the Russian Federation as of the offender. The International court of justice, if the state refuses to comply with the decision, according to the Charter, the opportunity to appeal to the UN security Council with a demand to ensure the implementation of this decision. But Russia has veto power in the security Council, and it will block such a decision of the security Council”, – explained the former judge of the International Criminal Tribunal Vladimir Vasilenko.

At the same time, according to Ukrainian politicians and diplomats, the decision of the International court of justice in favor of Ukraine can be a good pretext for toughening sanctions against Russia. Especially given the fact that the court in the Hague is actually recognized Russia as a party to the conflict in the Donbas, obliging Moscow to implement the Minsk agreements.

“This means that Russia is a party to the Minsk agreements, not the mediator, as she initially tried to represent themselves. The uniqueness of the situation is that when a decision is made by a court, it will require no extra vote – neither the General Assembly nor the UN security Council. This solution is direct action, it must be executed by any state member of the United Nations, and for non-compliance penalties, which is very painful for any government,” – said Petro Poroshenko during the meeting with foreign Minister Pavlo Klimkin and his Deputy Olena zerkal, which represents the interests of Ukraine in the International court of justice.

How to prove the Russian involvement in financing terrorism in the Donbas? With regard to the position of the court on the Convention on the prohibition of the financing of terrorism, there definitely is possible to speak about the fault of the Ukrainian side. Judge Ronny Abraham clearly said that “Ukraine has not met the standards of evidence…”. To put it simply, Ukraine needs to give the International court the UN evidence that Russia had evil intent and clear purpose for the financing of terrorism in Donbas.

The foreign Ministry on its part as evidence provided to the court correspondence with their Russian counterparts that the international court did not say (as his time in Georgia) that Ukraine has not tried to use all ways to peacefully resolve the conflict with Russia. It is also known that the court has provided satellite images stationing and moving troops and equipment near the borders of Ukraine and in the Donbas.

Officially, the Ukrainian side does not inform, who is involved, and will collect evidence for the International court of justice. Unofficially, Ukrainian diplomats say that the responsibility entrusted to the Ministry of justice. “While the Ministry of justice words only blowing hot air and not running. They have collected the evidence dossier. No one wants to cooperate with the SBU and the GPU on this issue,” say sources in the Ukrainian dipkrugah familiar with the proceedings in the International court of justice. According to them, ideally, the Ministry of justice together with the foreign Ministry, the PGO and the SBU should create a special Commission or working group which would gather all the evidence against Russia, and its involvement in the financing of terrorism crimes in the Donbass and in the Crimea in a single file.

“Today” sent a request to the justice Ministry, but no reply received. According to the Vice-speaker and representative of Ukraine in the humanitarian sub-group of the Trilateral contact group Irina Gerashchenko, at the next meeting the Ukrainian side will provide all the information about the daily violation of the silence, the supply of weapons and equipment, every illegally held hostage, murdered, about all the “Motorola” and “Givi” with Russian passports who terrorize Donbass.

According to Olena zerkal, may 12, when the international court of justice will publish a calendar schedule for the consideration of the merits, we will understand as there is time on the collection of evidence. According to the MP from NF Anton Gerashchenko, SBU, police and prosecutors must provide more information to the court in the Hague and so much work is already underway. In particular, to the claim of the Ukraine can join the conclusions of the international Commission for the investigation of the crash MH17. But experts doubt that it falls under the jurisdiction of the International court of justice.

“As already noted by some dear Ukrainian experts, and Vasilenko about it in their comments repeatedly said that there are some problems with the definition of the General line of formation charges against Russia. Even if we consider the crash of MH17, with the big stretch it is possible to bring a qualification of a terrorist act. And in such cases politics interfere with factual material,” – says program co-Director of foreign policy and international security Razumkov Center Alexei Miller.

Ideal for Ukraine scenario would be the establishment of the international Tribunal for the example of the Nuremberg trial of the former leaders of Nazi Germany. The main accusers were the USSR, USA, UK and France. There is another case, however, with the hard military component, when in the beginning of 90s the international coalition headed by the USA launched operation “desert Storm” to liberate Kuwait and then against Iraq was imposed tough economic sanctions. But as said the representative of Ukraine in the security subgroup of the Trilateral contact group Yevhen Marchuk, NATO will not fight Russia for Ukraine. It is difficult to imagine that individual member countries of the Alliance will fight for Ukraine. In this case, it should only rely on the preservation and the tightening of economic sanctions against the Kremlin in parallel with the creation of the analogue of the Nuremberg Tribunal.