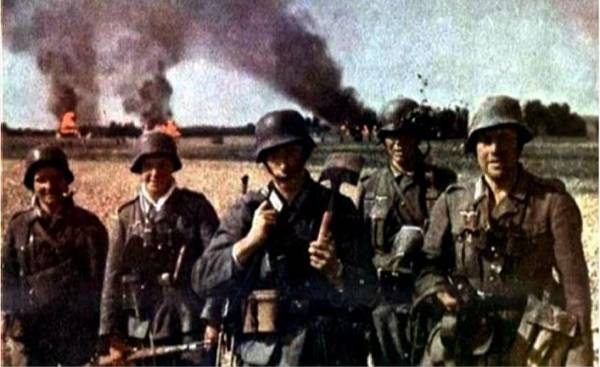 No sooner had the Wehrmacht to begin on 1 September 1939 attack on Poland, began a strange story. The Polish lancers, that is light cavalry, was strongly opposed to German tanks. Armed with spears, they attacked the steel cars like they were cardboard, and paid for his ignorance of death. Soon the German propaganda media wrote about about suicidal cavalry, the poles who attacked with spears and screams. The international press picked up the episode and disseminated by it. 20 years later the Polish film Director Andrzej Wajda in his film “flight” has created a kind of monument, dedicating it to the heroic resistance of the poles against the superior forces of the enemy.

The unequal battle between tanks and cavalry is one of the strongest and lasting narratives of a tank of the war, says German historian Markus Pullmann in his dissertation “Tanks and mechanized war.” Gathering all the great details, the story, in the end, went down in history memories of war in history books and in the memoirs of General Heinz Guderian, who was probably involved in building the German tank weapon. Lacked only a single step to scientific publications. A biographer of Hitler, Joachim fest wrote of “deadly Quixotic”. And Karl-Heinz Freezer, one of the best experts on tank warfare, discusses in his famous book “the Legend of blitzkrieg” that Polish cavalry attacked German tanks with sabres.

Although the tank was a “major weapon of land warfare in the twentieth century”, history has long bypassed this theme party. Pellman, scientific Director of the Center for military history and social Sciences of the Bundeswehr in Potsdam, decided to change that. Pretty broad scope, covering both military and technological development and the symbolic value of these weapons. As an example, multilateral analysis, the author proposes to perform an unequal duel, 1939.

Already the place itself cannot be clearly determined. After the newspaper “Wehrmacht” 13 Sep 1939 wrote about the “almost grotesque attack” Polish cavalry regiment, the flames added another propaganda newspaper in 1940. Thus, the German tanks leading the offensive in the so-called corridor, that is, between Pomerania and East Prussia, were attacked by Polish cavalry. And not far from Brańsk near Lithuanian border was carried out a similar operation. “Everyone knows that you only have one real tank, while the rest models”, — quotes a prisoner of war.

After 1945 actively quoted the work of Guderian, “memories of a soldier” (1951). The former General wrote about the Polish cavalry brigade Pomorska, which is September 3 in the Tuchola forests due to “ignorance of the structure and action of our tanks and attacked with bladed weapons and have suffered murderous losses.” After this, similar episodes in various versions was reflected in the memories of individual military units.

In documents of German divisions, which are stored in the Federal archive in Freiburg, Pallmann goes on the trail of the “core story”. So, apparently, it happened in the first days of the war, when the dismounted part of the German tank units or infantry escorts were attacked by Polish cavalry.

But it happened in a completely different form, then rather than actively described. So, in the war diary of the 4th Panzer division stated: “we Saw the enemy, the cavalry, which is very ably and nimbly with the use of natural obstacles (water obstacles and woods) led the fight in the rear”. Chronicler of the 10th Panzer division recorded the following: “during the battle in the forest pole turned out to be extremely skillful opponent. Of particular note is the combat cavalry brigade of the Pomorskie in the Tuchola forests”.

Indeed, in the early days of the war in Poland, probably, arose the strange hybrid situation of warfare, writes Pellman. But it was not about irresponsible “deadly quixotic”, and on accidental circumstances. As a rule, the Polish cavalry effectively against the tank when covering field fortifications, started a fight with anti-tank guns. “Only in the journalistic discourse about the cavalry began to write about the exciting history of the struggle of the cavalry against tanks instead of narrow-minded short stories…” — sums up Pallmann.

This mythical story has become attractive due to their duality. From the German perspective the unequal battle was proof of the neglect of the enemy, and mislead the common soldiers because of irresponsible management. From the Polish point of view, duel is interpreted rather as a heroic deed.