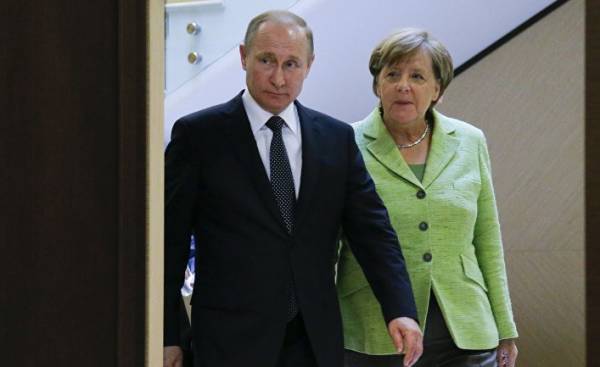 Angela Merkel says that there is a rather bad artist and barely know how to hide what he thinks. If so, that was a bad sign when it with a stone face expression came out on Tuesday afternoon at the summer residence of the Russian President Vladimir Putin on the podium for a joint press statements. On her face there was no trace of a smile. Evaluating an hour-long conversation with Putin, she said the word “well”, she even did not use the diplomatic phrase “constructive.” She talked about the “detailed” conversation.

Perhaps even if a cold treatment?

What actually prompted Merkel to visit Sochi? Two years the Chancellor was in Russia, last time it was in Moscow in may 2015 to commemorate the 70th anniversary of the end of the war to lay a wreath at the tomb of the Unknown soldier. A long abstinence from trips can be regarded as a demonstrative gesture Merkel in relation to the power to a person who is in the Ukraine by military force moved to the border.

In the office of the Chancellor for a long time said that the meeting would make sense only if there were concrete successes. And suddenly Merkel is solved not only for the trip with an unpredictable end. It is the desire of Putin also flew to Sochi on the Black sea, at the place with which it is associated are not very good memories. During her visit there in January 2007, Putin allowed his Labrador to roam around the feet of Merkel, even though he knew she was afraid of dogs. This scene became a symbol of the bad relationship between the two.

What Merkel is going on a journey without any prospect of concessions, should be attributed primarily due to the recognition of the fact that although Putin at times and hard to deal with, but that without him nothing moves. “International politics means that we must constantly seek dialogue”, — said Merkel.

In July the Chancellor will be host of the G20 summit in Hamburg, which is possible only through the unanimous adoption of the final Declaration. From Sochi Merkel returns at least with the promise of Putin to behave constructively. “Russia is ready to support the presidency in the G20”, — said Putin. According to him, he wishes that the summit was a success.

Much more controversial was the statement on the Ukrainian issue. In recent time there were no signs of relaxation of tension in the country. On the contrary: recently, the German diplomats reported in confidential telephone conversation to the Council NATO-Russia, which are “opposite”, and there is no progress. “From the Russian point of view, the dialogue on this subject is meaningless” — was quick sobering conclusion. Merkel put it in Sochi, as follows: “We are making progress only in small steps”.

True, Putin supported the Normandy format with the participation of France, Germany, Russia and Ukraine, which needs to be resolved this crisis. But he made it clear that he sees the government in Kiev, the main culprits in the fact that in overcoming this crisis there is no progress. Merkel said: “we Have a different opinion about what is the cause of the conflict.”

The Ukrainian crisis has become so complicated because the United States as a power factor in the region still does not show. Barack Obama (Barack Obama) supported the diplomatic efforts of Merkel and the Europeans and with them sought the imposition of sanctions against Russia. So Germany could at least prevent Washington forward broke the “hawks” who put US arms to Ukraine and thereby further inflame the conflict.

The absence of relations between Putin and trump

Immediately after the election Donald trump in Berlin feared that the new President behind the Europeans and Putin agree to and divide the world into spheres of influence. In any case, during the election campaign trump very friendly spoke about Putin.

But then adviser on security issues trump Michael Flynn (Flynn Michael) stumbled on dubious ties with Russia and a new President was forced to defend himself from accusations that came to the White house with the friendly support of the Russian secret service. Since then his tone has considerably cooled, although both policies have been in regular contact. Directly after the meeting with Merkel, Putin wanted to hold a phone conversation with his counterpart in Washington.

Merkel, in her words, would that trump and Putin have established a reasonable working relationship. Without both, neither in Syria, nor in Ukraine, nothing is moving, but still the two presidents never met. Even Chinese President XI Jinping (Xi Jinping) has been in residence trump in Florida, and this despite the fact that during the election campaign trump complained bitterly in this country.

While it is planned that trump and Putin will see for the first time in July at the summit Big twenty in Hamburg. Merkel would like to already have been agreed in advance the date of the meeting. First, because in this summit, which Merkel wants to speak with brilliance, a great influence will have a meeting of both politicians. Secondly, because the Chancellor wants the end of the period of uncertainty in the alignment of political forces.

Because it is possible that this would have helped in Syria. Putin has long accused the West that its policy does not support the rebels, and terrorists. In conversations with the Chancellor Putin every time he said her that while the West wants to overthrow the ruler of Assad, but can’t offer any real alternatives.

Merkel wanted the meeting with Putin to speak out for so-called security zone for civilians. “This concept could be developed further,” she said at a joint press conference. Putin, for his part, nor a single word not responded to this proposal.

The result is a trip to the Black sea was rather sobering. This applies not only to major international crises, but also to the subject of human rights. Merkel, in her words, also talked about the persecution of homosexuals in Chechnya. But, as the experience shows, no one was expecting calls from Germany will make Putin some kind of impression.

And there is concern that Russia may try to intervene in the election campaign on elections to the Bundestag. When Putin was asked whether Merkel can be sure that Russia does not want to influence the election in Germany, the Russian President angrily denied this insinuation. “We never interfere in the political process of other countries,” he said.

Merkel was not so sure about that. Although she is, in her words, not timid people, but added: “In the Russian military doctrine of hybrid warfare plays a role”.