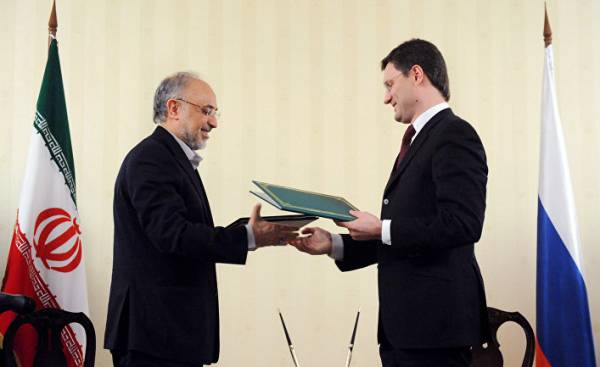 Hossein Amir-Abdollahian, special adviser to the speaker of the Majlis (Parliament) of Iran on international Affairs, said: “Political negotiation is the only way to resolve regional crises, what should pay attention to what should make the greatest effort of all parties who desire peace and stability.” This topic Amir-Abdollahian raised, meeting in Tehran with Russian Ambassador to Iran Levon Jagarana. He added: “Definitely the total position of the two countries caused by the need to combat terrorism became a major contribution to peace and stability in the world.”

Special adviser to the speaker of the Majlis, pointing to the positive dynamics of bilateral relations of both countries, he continued: “Cooperation between Iran and Russia in the spheres of political, economic and parliamentary undoubtedly benefit all the countries of the region.” Amir-Abdollahian, stressing the importance of cooperation between the two countries in solving regional and international problems and the need for its strengthening in the framework of international organizations and structures of inter-parliamentary cooperation, said: “Strengthening inter-parliamentary relations of the two States, especially at the level of specially formed by the two parliaments commissions — a very effective tool to give bilateral relations a friendly good-neighborly character.”

Strengthening of inter-parliamentary cooperation between Tehran and Moscow

According to the news Khane-ye Millet (“Khane-ye millet”), Russia’s Ambassador to Iran Levon jagaran, in the course of this conversation, pointing out common positions and approaches of the two countries, centered around a political settlement and a tough, uncompromising struggle against terrorism, said: “the Positive relations between the two countries at various levels, resulted in the agreed common steps aimed at establishing peace and stability in the middle East”.

Moscow expect from Donald trump other

On the other hand, Russia’s Ambassador to Iran, in an interview with Tasnim news Agency, Recalling the recent aggressive actions of the United States against Syria, said that Moscow has decided to support Syria in strengthening its air defense systems. Jagaran, speaking about Russian-American relations after joining the White House, the administration, trump said: “unfortunately, the reality is somewhat different from what we previously expected. 20 Jan trump publicly said that the previous administration of Barack Obama was that he, in turn, intends to fix that. And we expected that adjustment in policies will really follow, and the difficulties that were created artificially by Obama, will they [trump — approx. transl.] eliminated. And we are still waiting, as long as no major changes here are not followed”. He also said that he intends to Express appreciation to the Iranian side for all the steps taken, particularly those that were made by that country’s foreign Ministry in coordination and “reduction to common denominator” of the two countries ‘ positions on the issue [of the Syrian settlement — approx. transl.]. The Ambassador of Russia in Iran in this regard have noticed about the prospects of another round of talks in Astana with the following: “All the efforts made by the Russian and the Iranian side was very appropriate and timely and has created appropriate conditions for continuing the political settlement process. And we now expect the next round of talks in Astana, which will be held may 3-4. And on may 2 we will hold additional consultations on the sidelines of these negotiations. The results of the Astana talks should benefit the forthcoming Geneva meetings under the auspices of the UN.”