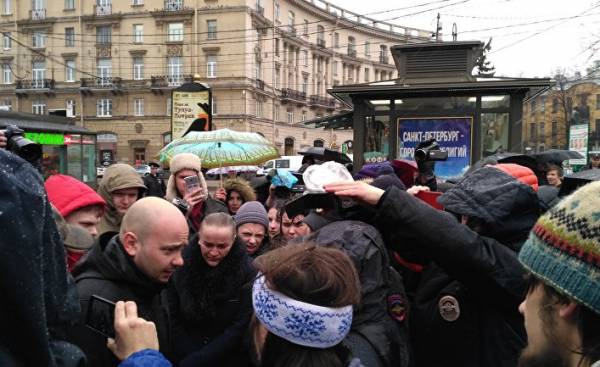 In dozens of cities of Russia on April 29, the movement of Mikhail Khodorkovsky “Open Russia” held a protest action under the name “Tired”. According to the organizers of the event, the activists brought to the foster, President of the letter with the demands to Vladimir Putin — not to nominate his candidacy in the elections of 2018. Radio Svoboda led the live broadcast of this action in Moscow.

The campaign called “Tired” was scheduled in 31 cities, in some cities, authorities action agreed. In Moscow activists to negotiate with the municipality failed. 28 APR Presnensky court of Moscow upheld the refusal of the municipality in negotiating the initial route shares on Slavyanskaya square, Staraya square and Ilyinka street. However, the police gave came to pass the appeal to Vladimir Putin a narrow corridor from the office of the President, which is approximately equivalent to the original plans of the organizers.

In St. Petersburg the action was interrupted by mass detentions. According to the “Open Russia”, dozens of people were detained. In social networks there was information that the police used force even against the journalists.

In Kemerovo the action “Bothered” about 20 people were detained. In Izhevsk and Gorno-Altaysk detained organizers of the protests. In Tula police detained all the participants of the protest action. Only, as reported by the movement “Open Russia”, the police came about 30 people. In this case the police took the activists of the letter to Vladimir Putin.

In the regions, activists of the “Open Russia” pressure was exerted before the action begins. The court in Kazan arrested for five days the coordinator of the local branch of the movement “Open Russia” Ilya Novikov and activist Emil Garayev for appeals to participate in the action on April 29. On 26 April they were detained for handing out leaflets. At the place of work of Novikov had been searched. In Kazan the event on April 29 is not consistent.

In Krasnodar, for instance, the reception of the President was fenced.

As explained by the Chairman of the movement “Open Russia” Alexander Solovev, the purpose was to demonstrate that in the 17 years of the reign of Vladimir Putin, “problems are just piling up and never addressed.”

“For 17 years our country is led by one and the same person, his name is Vladimir Putin. Since he came to power in 2000, he took over the entire system, destroyed an independent judiciary, independent media, destroyed the entire system of separation of powers, no control over the power. The last of the uncontrolled actions of the government, we can observe that the draft law on the renovation, under which, you can be evicted from our homes within 60 days. Yes, of course, on television they tell us that everything will be okay, but so far the bill has no specifics, and says a lot about what we will be left with nothing. Such a system is developed with the architect who created it, — under Vladimir Putin. That is why we want to say, “that’s enough. Tired of”. April 29, we take their demands to the President not to go for a fourth term, because it will be already 24 years of reign of one and the same person. We Brezhnev rules as long as Putin is now in power for 18 years, and this is associated with a complete swamp, and then even more”, — concludes Alexander Soloviev.

Ahead of the action in the Moscow office of the “Open Russia” were searched. According to the Agency TASS, law enforcement officers came to the office of the organization “for seizure of documents”. Representatives of the “Open Russia” said that officers movement seized laptops, including personal materials with symbols, about 100 thousands of leaflets to the campaign on April 29. Of the eight participants in the building of the lawyers inside to search one of them was not allowed, did not accept their petitions and comments, and are not allowed to see the protocols. In addition, the assistant coordinator of the Moscow branch Maria Baronova, Valentina dechtiarenko, twisted hands and forcibly took away the phone. Employees “Open Russia” noted that the investigators had no right to demand personal belongings for inspection, as part of operatively-search actions such procedure is not provided.

According to Radio Liberty, law enforcement officers explain their actions received a call that the headquarters of the movement is allegedly prohibited literature.

Coordinator, “Open Russia” Paulina Nemirovsky has suggested that this search — revenge of the Moscow authorities. Earlier, the organizers of the rally on April 29 announced that the main theme of the Moscow event will be the bill for the renovation of housing.

“As the UK and the FSB was not, and was only of the CPE (Center for counteraction to extremism. — RS), it is logical to assume that the scale of the event — city. In other words, revenge Sobyanin and city hall. Remind that the mayor is the enemy of all people evicted you from the apartment, will entangle the city with traffic jams, put on your senses not only the bolt but also two layers of low-quality tiles, and then send you ashnikov because you dared to rebel,” wrote Paulina Nemirovsky.

On 27 April the Ministry of justice at the request of the Prosecutor General has made the organization “Open Russia”, registered in the UK, the list of “undesirable”. The Prosecutor’s office said that the decision will not affect the activities of the same movement in Russia, in the list of “undesirable” hit structure Khodorkovsky: OR (Otkrytaya Rossia) (“Open Russia”, great Britain), Institute of Modern Russia, Inc. (the Institute of modern Russia, USA), Open Russia Civic Movement, Open Russia (the Social network movement “Open Russia”, UK). The press-Secretary of Khodorkovsky Olga Pispanen in the air of Radio Liberty tied the decision of the Prosecutor General with the action on April 29.

Previous large-scale protest action under the name “you do not Dimon” was held in Russia on March 26. Residents of more than 80 cities took to the streets, police arrested a record number of people — according to the project “OVD-info”, about a thousand demonstrators across the country, 1043 — in Moscow. The reason for this action was the film-the investigation FBK Alexei Navalny, stating that the Prime Minister of Russia Dmitry Medvedev through non-profit foundations and Trustees owns real estate in Russia and abroad, as well as yachts, agricultural and vineyards. The Prime Minister, a month after the publication called the investigation “a nonsense” and “papers”.