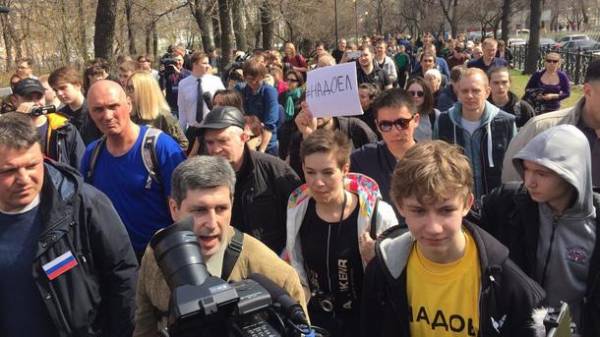 In Moscow held the event “Open Russia” “I’m Tired”. In fact, the action takes place against the actions of the Russian authorities and Russian President Vladimir Putin. About it reports TV channel “112 Ukraine”.

The police are already at the place where the people gathered and asked to disperse those who came to share. Militiamen gathered I propose to pass the petition and call the address where it can be done.

Note that the people who took in the action intend to petition administratiu of the Russian President appeals to Putin to refuse participation in elections of 2018. The number of activists is small – about 100 people.

According to “Medusa”, at least 20 people who took part in the protest action “Tired”, arrested in Kemerovo. The action also takes place in Tomsk.

Earlier it was reported that in Moscow “bricked” admissions Putin in anticipation of the action “Bored”.