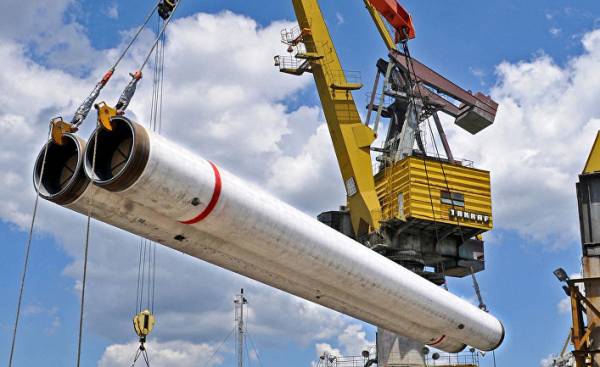 “Gazprom” has declared that the laying of the first gas pipeline “Turkish stream” will begin in the summer of 2017. According to Turkish experts, this is a positive step for the Turkish economy and for Russian-Turkish relations. In addition, the beginning of the actual implementation of the project can strengthen the position of Turkey before in need of natural gas to Europe.

The statement “Gazprom” about the beginning of this summer for laying the first string of the gas pipeline “Turkish stream” a few days before the meeting of the Turkish and Russian presidents Recep Tayyip Erdogan and Vladimir Putin on may 3 in Sochi gave hope to Turkish economists. Experts make emphasis on the fact that a project worth seven billion euros, is able to supply 31.5 billion cubic meters of natural gas, will be a mile stone in the recovery of bilateral relations and will contribute to the growth of the Turkish economy. Experts believe that this particular step in the construction of the pipeline will make an indirect contribution to the Turkish economy in the long run and can provide an advantage for Turkey, the countries of Europe with high demand for natural gas.

Economist Arda, Tundzha (Tunca Arda), according to which, this message implies the revival of events in the field of energy cooperation between Russia and Turkey, said: “Before the crisis in the relations between Turkey and Russia, a lot was said about the transformation of Turkey into an energy corridor through Russia. With the beginning of the crisis, these plans have stalled. Therefore, these events should be seen in a broad perspective from the point of view of international relations.”

The economist mentioned that Russia and Turkey are experiencing similar problems in relations with the European Union (EU). And continued: “the Problems that the two countries have experienced in relationship with each other since the financial crisis of 2015, prevented them to come together on common interests. De facto this step is important from the point of view of strengthening the commercial activity that serves the common interests of Turkey and Russia.”

“Turkey has always dreamed of becoming a node, which converges the plurality of energy paths. Now with Russia its efforts in direction of getting this position began to yield results,” said Tunja.

According to the expert, we should consider the fact that the statement of “Gazprom” was done a few days before the meeting of the presidents Putin and Erdogan on may 3 in Sochi. “They will also deal with the issue. In my opinion, this is one of the preparatory stages of this meeting,” said Tunja.

According to the economist, the indirect contribution of the project in the Turkish economy will be much greater than the contribution he would make directly. “This pipeline is an important step to strengthen the position of Turkey in bilateral relations, primarily with Europe. Because Europe needs natural gas. And for Turkey it is an important advantage from the point of view of the ability to demonstrate their strength,” said Tunja.

“A Declaration of good intentions on the part of Russia”

Economic expert Abdurrahman yıldırım (Abdurrahman Yıldırım) in a conversation with Sputnik emphasized the importance of starting the actual implementation of the project and noted that the project will play a role in the normalization of relations between Turkey and Russia. “Along with trade relations, this project “Gazprom” will have a positive impact on political and military relations,” — said the expert.

Then he continued: “the Project will make Turkey an energy bridge and will contribute to the Turkish economy due to the income it will provide. It will allow Turkey to occupy a strategic position and will bring the two countries together with each other”.

“In my opinion, this step is important from the point of view of the Declaration of good intentions, — said Yildirim. — This statement we can consider as an expression of Russia’s desire for a quick restoration of relations.”