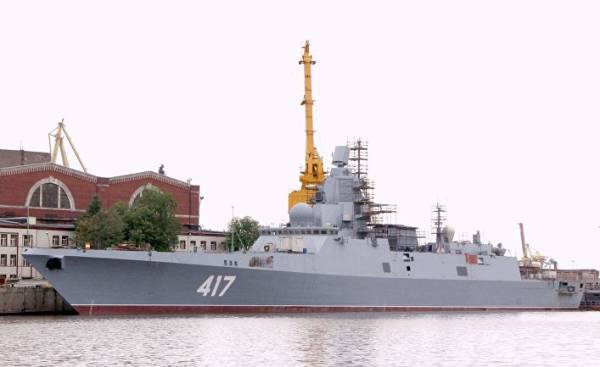 This week, Russian President Vladimir Putin spoke about the new industry that emerged in Russia due to the Ukrainian sanctions.

Putin visited the town of Rybinsk, in which he showed research-and-production achievements of “Saturn” in 2014, when Ukraine imposed an embargo on the supply of military products in Russia.

Корреспондент.net decided to find out what achievements led Russia to the Ukrainian sanctions.

The Ukrainian company Zorya-Marshproekt, part of the Ukroboronprom concern, there were a series of contracts to supply gas turbines for frigates of project 22350 Admiral Gorshkov, built by order of Russian Navy, as well as for the supply of main power plants for project 11356 patrol.

The frigates of project 22350 ships of the far sea zone of new generation, which was built under stealth technology reducing the possibility of detection.

They can carry up to 16 anti-ship cruise missiles and many anti-submarine missiles as well as artillery and anti-aircraft missiles.

In June 2014, the President of Ukraine Petro Poroshenko banned military-technical cooperation with Russia.

The ban also affected the supply of gas turbines for 22350, although, as they say in Russia that the money was paid.

Before the sanctions, it was expected that the Navy of Russia will receive three project 22350 frigate.

At the end of 2014 was launched “Admiral Kasatonov” in Saint-Petersburg. On the “Admiral Golovko” was carried out fitting-out works.

“Pots” had to replenish ships of the Northern fleet. After the annexation of Crimea, Russia has decided that the first two ships of the series will arrive on the black sea fleet.

Due to difficulties with the supply of the power plant, which was commissioned by the Ukrainian enterprises, Russia had suspended the construction of two built for the Russian black sea fleet frigates. As a result, the frigates will be sold to India.

The company has denied. Zorya-Marshproekt explained that the turbines for the “Admiral Grigorovich” was staged in 2013 and 2014, according to the contract concluded in 2012.

After the termination of cooperation of the Russian government has instructed the Scientific and production Association “Saturn” to complete the contract the Ukrainian dawns-Marshproekt.

April 25 this year, Vladimir Putin called for “Saturn” in Rybinsk, to start production in Russia of ship gas turbine engines. There called this event historical.

As Russian media reports, the company has met the President a poster with the quote “Russia has only two reliable allies — the Russian army and Russian fleet”.

Putin has launched a major project in the field of import, introduced in Russia due to sanctions after the annexation of Crimea.

“And, frankly, it’s useful for us from a technological point of view. Because of this we created virtually a new branch of science and a new branch of production”, — said the Russian President.

Deputy Prime Minister Dmitry Rogozin added that managed to make a breakthrough, creating a new industry for two and a half years: “they thought They had us cornered, and we will not be able to finish the construction of the frigates. But we did it!”

Thus, despite the stated achievements, Putin said that Moscow is ready to return to military-technical cooperation with Kiev.

The Russian authorities also noted that interest in Russian armaments is increasing worldwide. As Putin said, including through the effective application in Syria.

However, while Russian companies are loaded with orders of the defense Ministry, but to abandon the export they are not going.