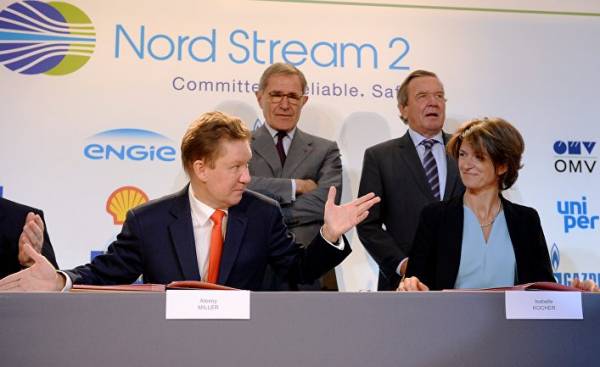 When you go from St. Petersburg and near the border with Finland, turn right on a small country road, and then a little drive through the woods to the right suddenly, there is a large gas station.

This compressor station of Gazprom, where the gas supplied via pipelines from the North, preparing to send two pipes of the pipeline “Nord stream”, laid under the Baltic sea.

Here check the temperature and humidity of gas; the dust and sand caught in it are removed. Here is created suitable to be transported via underwater pipeline pressure.

The scoreboard control room shows that at the moment, through the next station of Nord Stream is sent in the direction of Germany of 5.2 million cubic meters of gas per hour. Gas goes to Germany with a length of 1.2 thousand kilometers almost 10 hours.

Now Gazprom is preparing to build the same compressor station in the southern part of the Gulf of Finland. This will start new gas pipeline “Nord stream — 2”.

The project “Northern stream — 2” is causing a lot of controversy. Finland, for example, considers it a commercial project, and such Nordic countries as Denmark and Sweden, are worried about what Russia’s role in the Baltic region will increase. They consider the issue from the point of view of security and defence policy.

In the view of countries opposed to the project, Russia wants to increase dependence of the EU on its gas supplies. But the project is supported by Germany that introduces a split in the EU. Opponents remind that the Russian government controls more than half of Gazprom’s shares.

Finland has nothing against construction of the pipeline, if you will observe all the conditions for the protection of the environment. Public hearing report on the impact of the project on the environment will start in Finland this month. The plant in Kotka on the pipe already applied concrete weight coating.

Gazprom is the sole owner of the company Nord Stream-2. The company is confident that the two new pipes will be lowered to the bottom of the Baltic sea in 2020 will be ready for gas transportation.

Two new pipe will be placed at the bottom of the Baltic sea next to the existing ones. Thus, additional impact on the environment is not expected. According to representatives of Gazprom, we are talking about a commercial project, so policies should not challenge it in the case of compliance with all laws.

The question of funding remains partially open. The project cost is estimated at 8-9 billion euros. 70% of the financing necessary to markets that, according to Handogy, is not complicated.

The initial project to five major Western energy companies Uniper, Shell, OMV, Wintershall and Engi should become shareholders of the project together with Gazprom. Western companies withdrew from the Treaty, because Poland did not approve of the idea of a joint venture. And yet they continue to support the project.

Communications Director of Nord Stream — 2 Lissek Ulrich (Ulrich Lissek) stressed that the gas sold by Gazprom, will go to European utilities, not States.

“Do you think that companies such as Basf, Uniper or Engie turned into tools of Russian policy? No, they act according to the laws of business,” says Lissek.

According to the company Nord Stream-2 and Gazprom, in the future, Europe will need Russian gas. On the EU market there is competition. According to representatives of the companies, Russian gas is in demand because of its cheap price and assurance of supply. He is quite competitive.

Dmitry Khandoga suggests that the path of gas to Germany through the pipeline “Nord stream” is shorter than the path through Ukraine. Its price becomes lower.

How to project are the researchers?

“The”Nord stream — 2″, of course, is a commercial project, otherwise private European energy companies would not have to take part in it. The commercial spirit, however, does not mean that others should suffer,” says the Professor of energy policy, University of Helsinki Veli-Pekka Tynkkynen (Veli-Pekka Tynkkynen).

“A feature of large energy projects is their own notion about Commerce”.

According to Tynkkynen, Gazprom had to offer Western companies “carrot”. Due to the aggravated relations between Russia and Western energy companies would be unlikely to agree to participate in the project because they have to care about their image.

Senior researcher at the Institute of foreign policy of Finland Antto Vihma (Antto Vihma) reminds us that large energy projects are always of strategic importance.

“These projects are trying to exert political influence, to establish economic relations”.

Vihma recalls that Germany took a very negative position in regard to Russia’s military actions in Eastern Ukraine. Russia is now seeking to focus solely on bilateral relations between Russia and Germany.

Political overtones makes the fact that Gazprom is not a private company the Western model, although used in the West mainly soft means of influence, for example, the best prices.

Among other things, political issue, according to Tynkkynen, is the issue of environmental protection. Gazprom stresses that from the point of view of emissions of carbon dioxide gas is for the EU a cleaner energy source than coal. Given also the assessment of the environmental impact of the pipeline.

According to Tynkkynen, partly Russian gas is beneficial because the EU is not interested in the impact of the production of hydrocarbons on the environment of Russia. In the production of methane gas is released, which is an active greenhouse gas.

“Last month, President Putin said that climate change not necessarily related to human activities. You have to understand that if we are going to deal with Russian gas, we will deal also with the policy of Russia in the field of climate”.