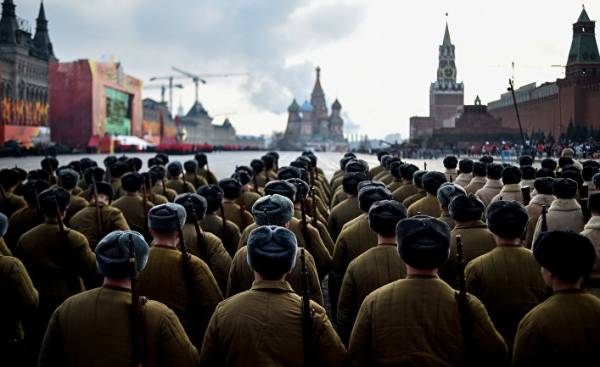 Moscow — Russia was included into a three of world leaders on military spending in 2016, according to published Monday, April 24, the study of the Stockholm international Institute for peace studies (SIPRI).

According to the Swedish experts, the military expenditures of the Russian Federation increased by 5.9% and amounted to 69,2 billion. Thus, it is superseded from the third position of Saudi Arabia, whose military spending has decreased by 30% and amounted to 63.7 billion dollars. However, on the heels of it comes India, which increased related costs by 8.5% (55.9 billion us dollars).

Out of competition in this area is still U.S. 611 billion dollars (growth in comparison with the year 2015 of 1.7%). Despite the fact that this is 20% below the peak reached in 2010. The second place traditionally in China, military spending which grew by 5.4% (215 billion dollars).

At the same time, as said the Agency “Prime”, the President of the Russian Academy of geopolitical problems, doctor of military Sciences Konstantin Sivkov, SIPRI calculations do not correspond to the realities of today, as in accordance with the official data in 2017, the expenditures of the Russian Federation in the defense sphere dropped “by more than 26%”.

Head of military economy laboratory of the Gaidar Institute Vasily Zatsepin considers that the trend in military spending has indeed changed in the new year to decrease.

“This is President Putin told Deputy Prime Minister Rogozin, he recalled in an interview with “Voice of America”. Only (Prime Minister) Medvedev once hesitate to say clearly. But officially stated that, starting in 2017, costs will decline, and enterprises VPK will need to care more about the issue of civilian products, to reduce their dependence on the state defence order and so forth.”

The top is dictated by a certain policy, although some Directors of enterprises VPK and pretend that do not understand the essence of changes, stated Vasily Zatsepin. In his opinion, the burden of military expenditure can not afford the country, but it is “absolutely soaked in the logic of Russian historical development”: “Russia has always been a military-police state, and when the “priest-king” of the money for these needs are not spared, and the Bolsheviks, although until the late 20-ies was quite a sensible policy in this respect”.

“The new armaments program exceeded funding in the previous five times. Such “horse race” always have to make at least very carefully. The Russian government has neglected this rule. As a result, we have what we have: the actual freezing of pensions no indexation of working pensioners, and so on. Frozen and a monetary contentment of the army,” he concluded.

Independent military analyst Alexander Golts agrees that in 2016 there is a reduction of the budget of the Russian Federation concerning military spending.

“But it definitely was not 26 percent, in Russia it is impossible, — he said in a commentary, “Voice of America”. I think the reduction was within 5 percent.”

According to Alexander Goltz, these changes are due to the state of the economy.

“Fell oil revenues, therefore, declined and military spending, he explained. — In the defense Department very proudly say that they managed to defend the right of a large part of the subsidies, while other agencies had seriously pressed down”.

Assuming that Russia needs an army of millions, these costs are adequate, the analyst believes.

“Of course, it is impossible to keep the military from hand to mouth, he continued. — And thanks to the increase in salaries, which occurred in the era of Serdyukov, the salary of the Russian military finally became comparable with the salary, which is produced by their colleagues from Eastern European countries. Similarly, the Russian army needs re-equipment. Because it is pointless to have a huge army, which includes military equipment of 40 years ago”.

It appears Alexander Goltz, the main question is — does Russia need such large armed forces?

“No one ever explained popular, where did this magic number “million”, — he stressed. — And to explain its occurrence only some speculative notions of higher authorities that a great power must have a million-strong army. Or the fact that Russia still has plans to fight the kind of global enemy, whether it is NATO or China.”

According to the expert, smoothes the situation is that with very large military expenditures, the Kremlin still does not allow himself to fall “in the madness, which fell to the Soviet leaders”.