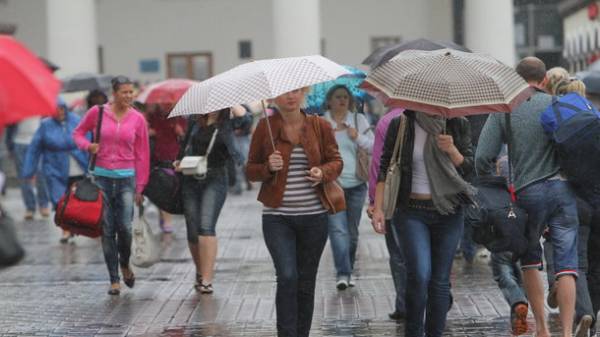 In Ukraine this week, according to the forecast of weather forecasters, is expected to significantly warming. So, the air temperature rises above 20 degrees of zero. In the West in the second half of the week will be thunderstorms, and the rest of the – mostly cloudy. The website “Today” found out what weather to expect Ukrainians in the coming days.

On Tuesday in Ukraine is expected to partly cloudy. While throughout the country the thermometer rises above 12 degrees Celsius, weather forecasters predict. In the West, warmer – up to 18 degrees, and in the East and the North, cooler – 12-14 degrees above zero.

In the capital on 25 April the air warms up to 17 degrees Celsius. The same weather is expected in Central and southern Ukraine. 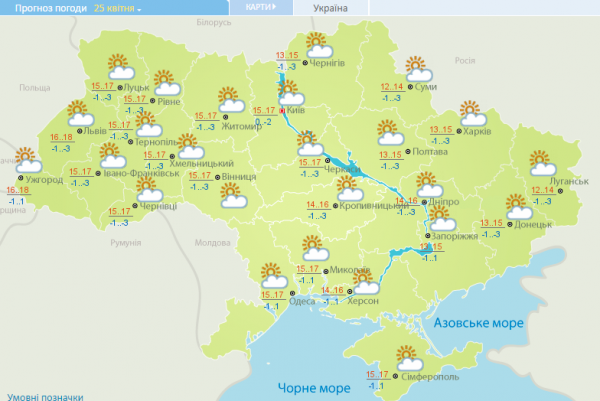 April 26, Ukrainians again waiting for the rains. No precipitation will be in the West, the North and in the capital. Despite this, this day is expected to significantly warming. So, in Kiev, on the North and West the temperature will fluctuate in the range of 20-22 degrees in the afternoon.

In the Central regions, from 19 to 21 degrees above zero. Relatively cool weather is expected in the East – 16-18 degrees. In the South, the air warms up to 17-19 degrees during the day and at night the temperature will fall to 4-6 degrees Celsius. 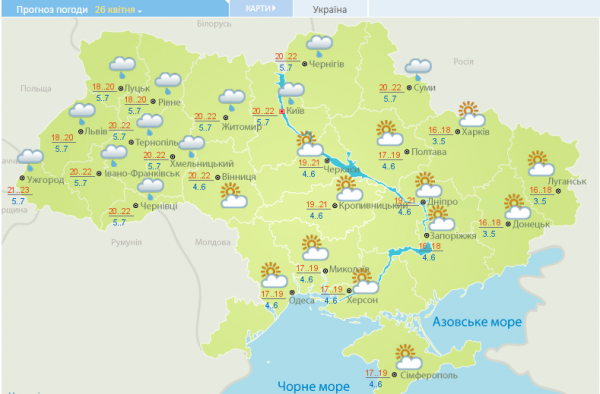 Warming will continue and 27th of April, in the Western regions on Thursday are expected thunderstorms. Air temperature will vary between 20-22 degrees throughout the Western part of the country, except for Lviv and Volyn regions. So, in Lutsk in the afternoon the thermometer column will rise to just 11-13 degrees, and in Lviv – 14-16 degrees Celsius.

In the South – mostly cloudy. In the afternoon the air warms up to 22 degrees. The same weather is expected in Kiev and in the North of the country. In the centre and East the temperature will range from 17 to 21 degrees above zero. 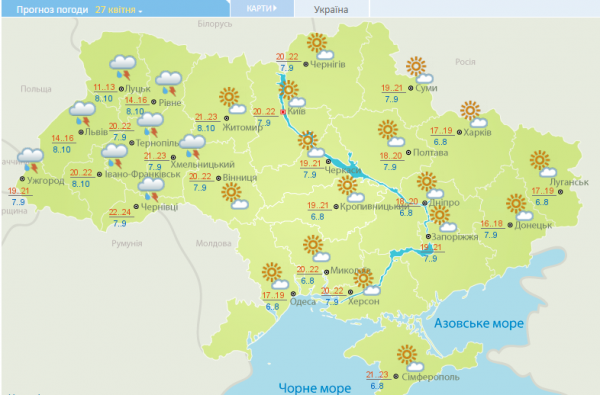 The same weather forecast in Ukrhidroenerho, will continue April 28. In the West, thunderstorms, the rest of the – partly cloudy. This Friday, is expected cold snap in Lviv and Lutsk – up to 10-12 degrees in the day and warming in the South and East. In the Kherson region in the afternoon the air warms up to 23 degrees, and in Donetsk – to 20.

25 APR revered the memory of the Holy Martyr Basil the Confessor, Bishop Parijskij, according to “the Weatherman”. From that day on it becomes much warmer, the earth warms, dries, so the people said “Basil the earth floats”. Our ancestors watched willow: if she to this day fluffed – severe cold will be gone. 25 APR massively flying bees, flying bees. Out of the burrows of foxes.

26th of April is the commemoration day of the Holy Martyress Thomaida of Egypt. The people Thomaida considered ukrotiteli passions. Our ancestors watched the selection of birch SAP: if birch a lot of juice, it is believed that the summer will be rainy. At this time see the first spring flowers (in warmer early spring), green raspberry.

27 APR revered the memory of St. Martin the Confessor, Pope of Rome. The people of St. Martin was called Liahona also this day was called “the crow’s feast”. At this time foxes migrate from old to new holes: “a Martin on foxes attacking kuryachii blindness”. Our ancestors noticed if the heat is on 27th of April, early may for a long time colder. Since that time, the thunderstorms start. Fly Swifts and killer whales.

28 APR revered the memory of the Holy apostles Aristarchus, PUD, Trofim. In this day inspected the apiary of: “On the day of the Holy Pounds get bees out from under the bushel.” It was thought that a swarm of bees flew to another yard, promised the house owner happiness. On Pounds Kalina and Rowan tree buds dissolve. During normal spring at this time, new leaves are coming out on birch. There are frogs. In the gardens there is an early flowering cherry tree.

29 April is the commemoration day of the Holy martyrs Irene, agapie and Khionia. The people called Saint Irene “Rasraj coast” because when spring runoff water are the cliffs of river banks, landslides. Hollow water washes away the shore. Also Saint Irene called Russianize, and on this day sowed the cabbage on the breeding grounds. Our ancestors noticed: “If the ravines will play and freeze again – expect the interference to the harvest“.