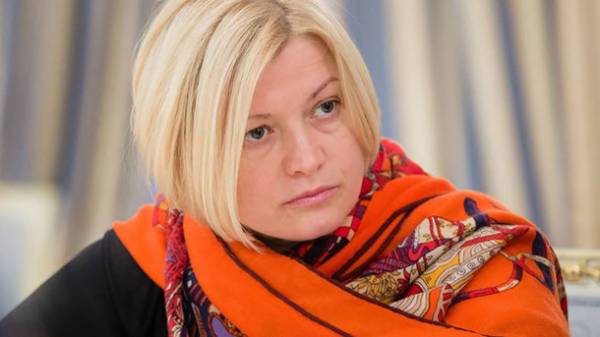 First Vice-speaker of the Verkhovna Rada and member of the Ukrainian delegation to the parliamentary Assembly of the Council of Europe (PACE) Irina Gerashchenko commented on the intensifying PACE of the scandal caused by the visit of the President of the Assembly, Pedro Agramunt in Syria. About this Gerashchenko wrote on his page in Facebook.

“An unprecedented scandal at the PACE session. This has never happened before in the history of the Assembly”, – said Vice-speaker of Parliament.

According to her, the Ukrainian delegation during the speeches of the delegates at the session of the PACE held up placards “with a photo of the visit of Agramonte with the Russians and Assad tortured children.”

“Agramont is (Russian President Vladimir. – Ed.) Putin and (President Bashar. – Ed.) Assad, not PACE – this is the position of the Ukrainian delegation,” – said Gerashchenko.

“What a shame, it happens with everyone who is associated with dictators,” said the Ukrainian delegate, adding that Agramunt at the meeting of the Assembly “chasing wet rags around the room”.

Recall that the Assembly has officially released the demand for the resignation of the President of PACE Pedro Agramunt.

Earlier it was reported that Pedro Agramunt unveiled the first official explanation about his visit to Syria along with Russian state Duma deputies.