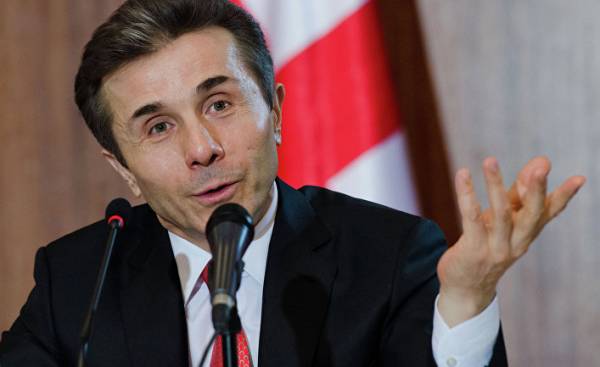 Georgia will completely refuse from buying natural gas from the Russian concern “Gazprom”. This was announced by the Minister of energy of Georgia Kakha Kaladze. Starting in April Georgia will move on the supply of Azerbaijani gas, which will supply the State oil company of Azerbaijan Republic (SOCAR) and a consortium engaged in the development of gas condensate field Shah-Deniz. In the end, the share of Russian gas in total imports will be 4%. We also learned about the IMF’s positive decision to grant Georgia a new tranche. Do these events on any positive democratic developments in Georgia, “Apostrophe” says the Director of the International Press Institute-Georgia Natia Koberidze.

Georgia and the Russian gas

Georgia in 2006, completely refused the Russian gas and since then lives happily without the stresses and interventions. And gas “Gazprom” in Georgia never happened. As soon as the Russian establishment, it became clear that Georgia is very strongly goes to the West and making political moves that do not suit the Russian policy, each time the gas issue was used in the interests of the Russian Federation, as is characteristic of the Russian state. So, they twice blew up the gas pipeline. In Georgia very rare winter frosts. But this is winter suddenly was blown up a gas pipeline on the border with Russia. In principle, it was clear that it was a political statelist. In 2005, it happened the last time. Then also blew up the Central power lines that transmit electricity from Russia.

Quickly replace the gas was difficult. However, if you compare with the experience of other States which suffered from the Russian political interest, then we have a week later there was another gas. The Georgian government managed to agree about deliveries with Azerbaijan. And Russia lost a major tool to influence the politics of Georgia.

On the contrary — Georgia became then sell electricity to Russia. This happened as a result of economic reforms, which allowed Georgia to become independent in energy terms.

Starting in 2012, Georgia received a new power, came another political force — the Georgian dream headed by Russian billionaire Bidzina Ivanishvili. They formally declared themselves as Pro-Western, but in the future, their actions traced, the idea is to find a common language with the Russian Federation. Despite their efforts, nothing really came of it. Yes, Russia has opened for Georgian goods market. But it happened because Russia became a member of WTO and had to open up the market to Georgian goods.

Deputy Prime Minister and Minister of energy Kakha Kaladze said that Georgia needs to diversify its gas supplies, which is strange. And the current government seems to be Pro-Western with a hint of Pro-Russian sentiment, wanted to start negotiations with “Gazprom”. But diversifitsirovat supply when not satisfied with the price. Georgia buys gas from Azerbaijan is two times cheaper than it costs in “Gazprom”. It is unclear why the Georgian authorities could arise such intention. In fact, they have decided to cut our energy independence and contact with hostile-minded government which has repeatedly used this tool not only against Georgia, but also in Eastern Europe, particularly Ukraine.

Was the version of why the Georgian government does. First, all the Georgian government — a puppet, she is responsible only to one man Ivanishvili, who are in power have post. Ivanishvili is very rich: the size of its state 32% of the total GDP of the country. Such ratio in the world is hard to find. In addition, Ivanishvili is owner of 1% of the shares of “Gazprom”. On the other hand, there were suspicions in a simple collaboration — the authorities decided to please the Russian side. All these negotiations two years were very opaque. The current Prime Minister had long supported the negotiations, but somehow a month ago, suddenly said he did not support. And then it became known that Georgia had refused herself to vreditelstvu. No Russian gas was not here and should not be, while Russia maintains that such a political way of life. We have a great alternative. We just didn’t fall into this trap again.

Georgia and the IMF

If the West was not so active against Georgia, it was very difficult to stay on our Pro-Western path. Georgia is still a very poor country, it has always depended on tranches of the IMF. But a corrupt and rotten regime of Shevardnadze was able to negotiate endlessly to get these tranches. The external debt has increased, debt’s never paid.

In 2003, the country has met the “rose Revolution” with a completely blank budget was only $ 400 million. After the start of reforms, Georgia continued to take money from international financial institutions, but gradually the volume of lending has decreased. In 2008, the IMF office in Georgia was closed as unnecessary. In 2009, creditworthiness has increased, financial institutions willingly offered money. External debt declined sharply, economic growth was on average 6%. But in 2013 the growth amounted to 4%, and then less and less. Last year it was less than 2%. The country asked the IMF to come back because began budget deficit, the economic chaos. Obtaining loans is not a very good indicator of the current state of the Georgian economy. Good that we earn the trust of the IMF, but compared to the past performance of our economy this is a step back. We just again ask money from the international financial institutions.

Yes, before we had momentum, we had everything ready to sign Association with the EU. Yanukovych also could not stand such pressure Russia, as we did not have the dependence from “Gazprom”. We inertia and had to get a visa-free regime two years ago. But got later for formal reasons. And we, I emphasize, there has been a consensus in society on the issue of EU integration, and on the question of NATO it is.

All reforms in Georgia is now suspended. Sorry, came to power people who only use achievements of the previous government. Forecast of development in the country is very pessimistic. After all, such a democratic system as it is now in Georgia, anywhere in the world. Informal rulers exist in authoritarian States. In a democracy there was no such precedent in the world. The whole country has turned into the backyard of the castle Ivanishvili. He informally runs the country, and Georgia has ceased to go forward. We are not rich, and only getting poorer. He has enough money to bribe the required number of people in order to keep the political atmosphere. All media is already working.